Posted in: No Huddle by Brent Lorentson on August 28th, 2013 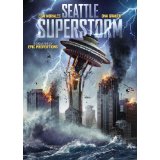 With films like Sharknado it’s clear that that Hollywood can’t say no to a disaster movie no matter how bad it may sound.  It’s almost as though everyone has given up on the idea that a disaster movie can be good; The Towering Inferno holds up after all these years, yet you can almost guarantee if they attempted to remake it, awfulness would certainly follow.  Heck, the Poseidon Adventure was amazing to watch growing up, and even on the heels of Titanic and with “better” special effects at their fingertips, the remake, Poseidon, was a failure.  What I find all the more odd is that with these straight-to-DVD or SYFY-made movies, the bigger the concept the smaller the budget, leaving it no other route but to fail.

The film jumps into the fray as it opens with Seattle in the grips of a storm that is going to cause a magnitude of destruction.  It’s as though we accidently channel-surfed and fell into the final sequence of Twister till suddenly we flash back to nine hours earlier and things are peachy keen in the beautiful city, home to the Space Needle.

Tom (Esai Morales) is recently engaged to Emma (Ona Grauer), and their teenage kids are not happy about the new lifestyle change, neither looking to gain a replacement parent.  Tom’s son Wyatt (Jared Abrahamson) is constantly butting heads with Emma’s eco-friendly daughter Chloe (Mackenzie Porter), though we know in these kinds of films those who don’t get along at first always seem to work things out in the end.  And that is the biggest problem with this movie; from the start you already know how this is all going to end.  Did we really need a feuding family to drive this story forward?  But unfortunately that is not the only cliché thrown our way.

The cause of this massive weather disturbance has to do with an object our military shot out of the sky.  Was it a weapon fired upon us, or is it simply space debris tumbling into our atmosphere?  This is a question scientists need to answer, but as they investigate something seems to be occurring at the crash sites, and it has to do with the climate or  water.  As more water is being sucked dry into the atmosphere it develops these super storms that seem to only want to grow in size and strength till not only the city is destroyed, but in theory it could wipe out the planet.

Since Emma is also a Lt. Commander in the military, she is one of the officers put into position to take care of the weather situation as it is getting out of hand.  Tom, as luck would have it, also was a scientist that worked with NASA, and he has some theories as to what maybe going on.  While the parents are off trying to save the world, the kids are left on their own to try to make it home, but of course things are never so simple in these kinds of films.  But what left me smacking my head for how ridiculous this gets: who is it who figures out a potential way to stop the storms? No, not the scientists from NASA or any of the top minds working around the clock; it’s the crackerjack daughter Chloe who happens to love chemistry.  As for what caused/created the storm, well, I’m not here to spoil anything, but it’s at least a better explanation than I had expected.

As for the effects throughout the film, it would be too easy to simply say they are cheesy, but what I have to give them credit for is they at least tried to do the best they could within the budget they had.  Sure, the cover promises tidal waves flooding the city, but if anything we get the opposite considering all the water is evaporating.

Overall I have to say that though this isn’t close to one of the better disaster films, it is definitely not the worst.  By trying to at least keep a serious tone, the film keeps itself away from falling into the category of Sharknado.  Though the film may not blow you away, it still makes for a decent addition to a B-movie marathon during a stormy afternoon.

Brent Lorentson is a horror writer and film critic based out of Tampa, Florida. With a BA in Digital Film, he co-wrote and co-directed Scavenger Hunt. His short stories have appeared in various horror anthologies. In 2019 his short script Fertile Blood will be a part of the anthology horror film Slumber Party. He is currently working on his first novel A Dark and Secret Place set to be released in late 2019. Favorite Films: Taxi Driver, Fight Club, I Saw the Devil, The Wild Bunch, Dawn of the Dead, A Clockwork Orange, Pulp Fiction, Heathers, The Monster Squad, and High Fidelity.
Pain & Gain (Blu-ray) Grey’s Anatomy: The Complete Ninth Season