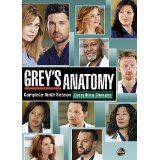 “At first, idleness can seem like a welcome distraction the troublemaking and the fun. Everyone needs some idle time to focus on something other than work. Even if it means focusing on something that’s a little bit scary. Stepping back from work is the only way to get perspective.”

For nine years millions of people have been spending those idle moments in the company of the cast and characters of Grey’s Anatomy. There are worse places one could be.

Grey’s Anatomy has continued to surprise fans and critics alike. As far back as the 7th season there was strong talk that the show was drawing to an inevitable close. Since that time we have seen the end of the spinoff series Private Practice, which I always considered to be a better show. Nothing’s changed; as the show entered its ninth year there was the same talk both from outside and from within that the series was ending. Not only did it not end, but the show took some serious strides in ratings and storytelling. Now, going into 10 there is still talk of the show ending. The huge talk involves Sandra Oh leaving the series, but cast changes have been going on every year for this series. Huge regulars have left or even been forced out. Over the years we saw huge names like Isaiah Washington, Kate Walsh, Katherine Heigl, T.R. Knight, and now Eric Dane and Chyler Leigh. Is Grey’s going away? I’m not completely sure. What I am sure of is that fans should not miss the 9th season on DVD.

If you want some history of the show, we’ve reviewed most of the eight seasons that have come before now. You can catch them here: Previous seasons. But this is not the kind of a show you can just start with on the 9th season and get much out of. If you’re not familiar with the cast and crew, start from one and work your way up. This review just isn’t for you. Fans wanting to continue the ride…read on.

Every season brings radical changes to the doors of Seattle-Grace Hospital. This season we start with the name of the hospital itself. By mid-season it changes its name to Grey + Sloan Memorial Hospital. This change, like most of the season’s story arc, is the result of the plane crash that ended the 8th season. Lexie dies, and Sloan is about to follow her. That’s where the name comes from. Arizona has lost a leg, and it has turned her character away from the cheerful person fans have always known to a rather dark person who ends up doing the unthinkable. Shepherd has a crushed hand, and the season chronicles his struggle to get back in the operating room. It’s not a given. Yang has moved on and is at a famous cardiac clinic in Minnesota. Meredith has the least physical trauma but is afraid to fly. Of course, all of these complications have strong impacts on the relationship dynamics.

The first episode begins with a pretty nice tribute to the Sloan character. Many of the characters recall their favorite memories. It’s kind of strange as Sloan dies in episode 1, but the second episode takes a step back in time to closer to the plane crash where he has not yet died.

The lawsuit by the plane victims nets a huge reward to them but threatens to put the hospital out of business. Even if it’s bought, the new owners are stripping away everything the characters have loved about the place. They conceive of a plan to buy the place but end up under the thumb of young and inexperienced Avery Jackson.

The concentration of issues from the plane crash is both an asset and quite a liability to the season. One of the biggest problems is that it winds down with still a half dozen episodes or so to run. They get filled up with things like Meredith having a new baby and a Bailey wedding. Bailey also gets more action here when she finds out the CDC is investigating her for spreading a staph infection that kills three patients at the hospital. It sends the character into an uncharacteristic spiral. In fact that may well be the hallmark of the entire seasons. Never before have these characters been so drastically changed from who they had been. Development is good, but these changes are forever. By the end of the season we find we’re about to lose another beloved character, and it’s not Yang.

The set includes a feature on Jim Pickens, Jr. who lives a bit of a cowboy lifestyle. It’s a side of him you’ve never seen. There are the bloopers and deleted scenes to round out the release.

Going forward the series has plenty of huge challenges. There are more cast changes, and the core cast has been sadly diminished to a small few. The future, if there is one, is to go back to the show’s roots and focus on a new round of interns, a next generation, if you will. I have seen shades of this in year 9. We spend more time with them, and there are more than a few episode where each side looks to the other and thinks that that used to be/ will be them. One thing is for sure, “It won’t last forever“.

Gino Sassani is a member of the Southeastern Film Critic's Association (SEFCA). He is a film and television critic based in Tampa, Florida. He's also the Senior Editor here at Upcomingdiscs. Gino started reviewing films in the early 1990's as a segment of his local television show Focus. He's an award-winning recording artist for Omega Records. Gino is currently working on his 8th album Merchants & Mercenaries. Gino took over Upcomingdiscs Dec 1, 2008. He works out of a home theater he calls The Reel World. Favorite films: The Godfather, The Godfather Part II, The Body Snatcher (Val Lewton film with Karloff and Lugosi, not the pod people film), Unforgiven, Gladiator, The Lion King, Jaws, Son Of Frankenstein, The Good, The Bad And The Ugly, and Monsters, Inc.
Seattle Superstorm The Good Life