Posted in: No Huddle by Archive Authors on September 2nd, 2013 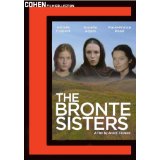 The Bronte Sisters is a very historical film in many ways. It is the most accurate film we have depicting the real lives of some very famous writers. It is also an old film from 1979 being reissued that stars three great actresses who are very well known now. It has an excellent commentary that addresses both of these  points by film scholar Wade Major and Bronte scholar Sue Lonoff de Cuevas done in 2013. It also includes a 2012 Bronte documentary by Dominique Maillet called the Ghosts of Hapworth. The Bronte Sisters was directed by respected French director, Andre Techine’.

That the French seem to love these British sisters only shows the universal appeal their stories had. No one can deny that Wuthering Heights and Jane Eyre are two of the best known stories in literature. Both have been made into films numerous times. I just recently reviewed a new version of Wuthering Heights just a few months ago which prompted me to watch an old British miniseries called The Brontes of Hapworth. There was even an old Hollywood movie called Devotion that took many liberties with the truth. The three Bronte sisters share a kinship with another beloved writer, Jane Austen. Their stories are about intelligent women who tried to find a place in a society that did not truly respect them. The three sisters originally published under male names due to Victorian constraints but eventually had to come clean after dealing with some difficult publishers. They all started writing together as young girls, creating the mythical lands of Angria and Gondol. Anne’s books Agnes Grey and The Tenant of Wildfell Hall are not as well known, but highly regarded as early examples of feminism. The three sisters were spurred on by their brother Branwell who was full of artistic talents in poetry and sculpture but was slowly robbed of any success. He even erased himself from a portrait he did of the four siblings.

The Bronte Sisters is an accurate depiction of their lives which were sad and short. They had two other sisters, Maria and Elizabeth, who died at ten and eleven. The mother died when they were all young. The one who outlived them all was their father, Rev. Patrick Bronte, who lived into his eighties. The four siblings died at ages 29, 30 and 31 except for Charlotte who lived to 38.

The saddest of all was Branwell, who died of a broken heart after being spurned by a married woman, never leaving his bed consumed with alcohol and laudanum. He was considered a genius by all but was surpassed by his sisters. He died in September of 1848 followed by Emily a couple of months later and by Anne a few months later. Charlotte died in 1955. I mention this because the film covers those few years when they come to fame and then face tragedy.

I must address the most prominent feature of this movie, which is the three accomplished and gorgeous actresses who play the sisters, Isabell Adjani (The Story of Adele H., Ishtar, Camille Claudel, The Tenant), Isabell Huppert (Heaven’s Gate, I Heart Huckabees, Entre Nous, Amour), and Marie-France Pisier (Love on the Run, Julie and Celine Go Boating, Cousin Cousine). They are all truly stunning and brilliant women and went on to great acclaim. They were somewhat constrained by the director, because he wanted to enhance the somber storyline. The story doesn’t delve into the sisters’ literary development, but it should be noted that at least an hour was cut before arriving at the current 120-minute length.

It is a fascinating story and a great chance to see three great actresses at the height of their beauty and notoriety. It is good that older films are being revived on DVD that might easily have been forgotten. It was not an enormous success at the time, so it is likely it would have been forgotten. Wuthering Heights and Jane Eyre have most definitely not been forgotten, and the stories of the real siblings are nearly as compelling. It is a strange and unique story in the history of literature.