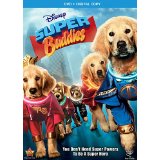 “You don’t have to have super powers to be a superhero.”

I know that’s right. Hi. I’m Baby, and I’m the German Shepherd / Chow mix that runs security here at Upcomingdiscs. We call it Baby On Board Security, and if you want to know what my superpower is, just try and deliver one of your Fed Ex or UPS packages when I’m on duty, which is all the time. And that spells F A N G S.

I know it’s been a long time since you guys have heard from me. You see, I’ve been in the dog house, and that spell T R O U B L E. You see there was this sofa tag. How was I supposed to know what Do Not Remove means. I’m a dog. If you see something hangin’, you remove it. Life’s just that simple from this angle. Come on down here once in a while and try to see things from my perspective. You humans don’t always look so cute from down here, you know. Do you guys even have any idea the kinds of things you drop or what you bring in on those shoes? I don’t wanna talk about that right now. What I do want to talk about is the latest Buddies movie from Walt Disney. It’s called Super Buddies, and let me tell you guys, this one is way out there.

Gino tells me there was a time that you used to get cool prizes in your cereal boxes. They don’t do that anymore, and Gino’s like ancient in dog years, so I guess it’s been a long time. They do put prizes in dog food bags these days. Mine has tennis balls, but I’m not interested in that. OK, I made that last part up. I’d still rather have more food. In Super Buddies they get these cool colored rings in their dog food. They tie in with some comic book character where a kid named Jack (Earles) teams up with an alien who takes over the form of a dog to become Captain Canine (Hanks). Canine crashed on Earth years ago, and he’s been trying to keep the magic rings away from the evil Drex and his sidekick Monk-E. Guess who really finds the rings buried in their barn? You got it…The Buddies.

When they put the rings around their necks they each get a super power. Budder Ball (Shinder) can super-stretch like that guy on The Fantastic Four. It would be The Fantastic Five if they let me join. Rose Bud (Hannelius) has super speed. Mud Bud can become invisible. B-Dawg (Roth) gets super-strong. Buddha (Wyson) can levitate stuff including himself. Captain Canine teaches them to work as a team and be even stronger together. When Drex shows up for the rings, they can take care of business.

This is a typical Buddies and human pup type of film. There are even more talking animals than ever before. You have pigs that speak Pig Latin, chickens that talk like the Jersey Shore girls, along with bulls, ponies, and a kitten with an attitude. The adults are, as always, pretty clueless. Look, that’s not me talkin’. I know where my treats come from. Humans are pretty smart, in my book. There are exceptions, and they usually drive noisy trucks full of packages. I mean, really, guys, do you not know I can hear you comin’ a mile away? Dah…super hearing here. Anyway…, here humans pretty much trip over their own paws and are helpless to stop the trouble.

Jack and Captain Canine have been telling their story for years hidden in comic books. That’s where the kids and Buddies have to find out how to stop Drex. I guess I better start learning to read comic books. No telling what kind of cool things I might learn like where they make those treats that look and smell like bacon. I bet they’d like ol’ Baby here to stop in and say hi…right?

Pixar’s magic charm John Ratzenberger plays one of the boys’ grandfather, and he gets into the act as Grandpa Man. OK, he doesn’t have any superpowers, and he looks really lame with the big G cut-out on his T-shirt, but I like John, and he can come pet me anytime he wants. You do know to bring treats, right, John?

I guess this one had to be coming. Superheroes are pretty hot right now. It seems Gino is watching one all the time these days. The Buddies get some cool costumes, and it is fun watching them do super rescues. They try to save a kitten in a tree who’s embarrassed to be rescued by dogs. Can’t say that I blame him. Hey, I’m a dog, and I have to say I love cats. They’re particularly good with duck sauce. Actually, let’s not talk about that right now. They rescue a girl caught in a fire and stop a couple of bungling burglars from cleaning out the local candy store.

I have to say that as much as I have fun watching the Buddies movies, they are getting a little too fantastic. I remember when the talking dogs were pretty much the only fantasy element these movies had. They had more charm, and the themes were mostly about how you can do anything if you put your mind to it and the joy of kids bonding with their puppies. Now the kids are pretty much secondary, and the films are using more f/x types of things to move the story. I think Director Robert Vance is not giving his audience enough credit here. Cute’s good. Just look at me. I’d like to see the series return to those simple roots. Whatever way it happens, I think you can count on the franchise continuing. “Catch you on the flipside, Dudes.” 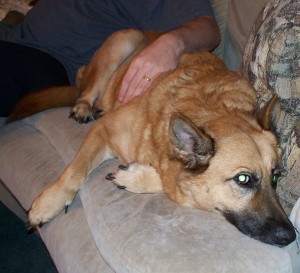 Baby was a German Shepherd/Chow mix canine reviewer at Upcomingdiscs from 2010 until 2016. She was also chief of security here with her Baby On Board Security side-business. And that spells F A N G S.
Zombie Massacre (Blu-ray) Bronte Sisters