Posted in: No Huddle by Brent Lorentson on September 3rd, 2013 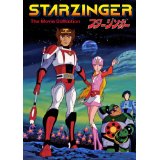 First let me come out and say I know very little about Anime; aside from a few episodes of Speed Racer when I was growing up, Anime just never really caught my interest.  But I’m willing to give anything a shot; after all, it’s never too late to discover a new genre in entertainment.  Unfortunately the Shout Factory release of Starzinger was a bad first experience that made for a long cringe-worthy experience.  Films like Howl’s Moving Castle and Grave of the Fireflies are beautiful pieces of animation as well as touching stories.  Then there are the animated series that are simply there to entertain for half an hour; when it comes to Starzinger better known as Spacekeeters, well, this did absolutely nothing for me.  The show that consisted of 26 aired episodes has been edited together to make three movies that Shout Factory has put out in a 2-DVD set.

The story is simple; there is a great disruption in the universe, and the only way the galaxy canbe restored to the peaceful galaxy it was before depends on Princess Aurora reaching the Great Planet.  The Great Planet happens to be on the other end of the galaxy, so to ensure her safety Jan Kugo, a great cyborg warrior, is ordered to escort her.  Along the way Aurora and Kugo confront aliens and monsters but also find two other cyborgs to come along for the journey, Don Hakka and Jogo the Wolf.  The first movie really seems to be about nothing more than the four joining forces before setting off for the last leg of their journey and reaching the Great Planet.

The second movie finds Aurora and her cyborgs confronting more aliens that stand in their way, but the most interesting character is Beramis, a great female cyborg who believes she is stronger than Kugo, Hakka, and Jogo.  Her obsession with wanting to defeat Kugo is somewhat of a nice change from the other aliens the gang encounters, considering the battles seem to all run together and really do nothing for the plot other than to pad some of the time.

As for the third film, this is a bit of an exception.  This time the gang finds themselves on a planet where those inhabiting it believe they are gods that can help defeat this monster that is enslaving all the planet’s women.  For the first time the cyborgs have their hands full, and their weapons do no harm against the Giant. Things get even more out of hand when they have to fight the mutant leader Gorga who is able to create monsters out of the plants and animals that flourish on his planet. But thankfully Kugo has gotten some upgrades to even the odds as he goes head to head with Gorga. As this story progresses we get a little more excitement, but still the payoff just doesn’t deliver as one would hope.

I understand that this was a Japanese production, but the English voice dubbing for this is awful.  Sure, the translations may be correct, but having such direct translations simply makes every character feel robotic and hard to relate to.  The music score is simplistic as well and adds no excitement; even the most epic battles on the DVD could be used as a lullaby to put even the most restless child to sleep.  Recycling the same fat jokes with Hakka and Kugo’s constant obsession with Aurora makes it go from laughably cheesy to just being annoying.

This isn’t a title I’d recommend getting for the kids simply because there is so much better that is out there.  For those seeking a little boost of nostalgia, I’d pursue with caution, because a lot of this is bland and dated.

Brent Lorentson is a horror writer and film critic based out of Tampa, Florida. With a BA in Digital Film, he co-wrote and co-directed Scavenger Hunt. His short stories have appeared in various horror anthologies. In 2019 his short script Fertile Blood will be a part of the anthology horror film Slumber Party. He is currently working on his first novel A Dark and Secret Place set to be released in late 2019. Favorite Films: Taxi Driver, Fight Club, I Saw the Devil, The Wild Bunch, Dawn of the Dead, A Clockwork Orange, Pulp Fiction, Heathers, The Monster Squad, and High Fidelity.
Getaway Shadow Dancer