Posted in: No Huddle by Jeremy Butler on September 3rd, 2013 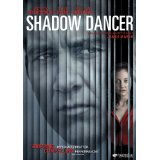 “Let me tell you what it’s going to be like. Irish girl, English jail. Every time you want to see your boy, every time he wants to see you, his grandma’s gonna have to load him onto the ferry and drive 400 miles. It’s gonna break his f***in heart.”

Which is stronger, the bonds of family loyalty or self-preservation? That is the question that is presented in Shadow Dancer, the espionage thriller starring Clive Owen and Andrea Riseborough. I had high hopes for this film when I picked it up; I was expecting an unpredictable and suspenseful thriller that I would not be able to take my eyes away from. What I got was…well let’s just say I had no trouble prying my eyes away.

Set in Belfast in the 1990s. After being caught dead to rights by MI-5, single mother and IRA collaborator Collette McVeigh (Andrea Riseborough, Oblivion) is brought before intelligence officer Mac (Clive Owen) where she is given a choice: become an informant and assist MI-5 with bringing down her brothers, Gerry and Connor, two full-fledged IRA hit men. She naturally is hesitant about the idea of betraying her family, but after considering what will happen to her son if she were to be arrested, agrees.

However, her standing within the organization has been damaged by the failed mission that put her on MI-5’s radar. The IRA suspects a mole may be in their ranks (how right they are). A high-ranking officer within the organization has been dispatched to find the responsible party and silence them. Dodging suspicions all while trying to honor her deal with Mac, Collette lives in fear, mere inches from being discovered.

Somewhere in this slow-paced and action-voided film beats the heart of a true edge-of-your-seat espionage thriller. Or at least that is what I am choosing to believe. Sadly, that heart is never revealed during the film’s duration; it’s hinted at in a few scenes, but there is no real sense of urgency. Overall the story turns out to be a waste of an intriguing premise; very slow-paced with no action to speak of. I spent a vast amount of my time awaiting the inevitable action that I was anticipating and was very disappointed when the credits rolled and I was left hanging.

I also did not buy how the situation was portrayed. Collette is supposedly in an extremely severe position: she has to choose between going to jail, therefore abandoning her son, or betraying her brothers, condemning them to a life behind bars. That is a situation to send anyone over the edge, and yet Riseborough remains controlled, and when she speaks she lacks passion or conviction. I can only assume that the portrayal was a choice, and it was a bad one in my opinion, because it damages the overall integrity of the film. I saw nothing remarkable in Owen’s performance as well, which is to say that nothing about his performance truly stood out. The addition of Gillian Anderson was very underutilized given that she only makes a handful of appearances, and when she does appear, she offers nothing of substance.

With  all my might I wanted to enjoy Shadow Dancer, but it needed to meet me halfway and it did not deliver on its end, so I’m afraid I can’t deliver on mine. The movie was not gripping, it was not compelling, the storyline went from building momentum to a rapid decline, and by the end of the film I found myself uttering, “What?”

Jeremy Butler is a film school graduate of the International Academy of Design and Technology. He is been writing for Upcomingdiscs since 2012; however, movies have played a big part of his life for much longer. Favorite genres include horror, science fiction/fantasy, and comedy. Favorite movies are V for Vendetta, Boondocks Saints, Kiss Kiss Bang Bang, and The Godfather.
Starzinger: The Movie Collection Stag