Posted in: No Huddle by Jeremy Butler on September 4th, 2013 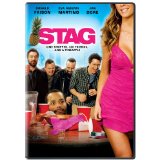 The shoe is on the other foot in the Donald Faison and Eve Amurri Martino-led raunchy comedy, Stag. Curious enough, for being the supposed co-leads of the movie, the focus of the film is on them less than half of its duration; Stag is basically about the background characters. The only issue with that is the background characters aren’t really all that interesting when you get right down to it.

Ken (Donald Faison, The Exes) is revered by his friends as the king of pranks. Every time one of his friends is about to get married, as part of tradition he pulls a legendary prank at his would-be victim’s (the groom-to-be) stag party; everything from getting them blackout drunk and putting them in ring with a boxer to getting them black-out drunk, stuffing them in a shipping box and shipping them first class. Now it is his turn to take the plunge and his friends are thinking vengeance is theirs, and Ken is on the edge of his seat in anticipation of what they may do to him.

Leading the charge is Rory (Brendan Gall, The L.A. Complex) who was left no depth perception after Ken’s prank; problem is Rory is finding it difficult to rally his friends to participate given that times have changed and the group’s glory days are now behind them. Despite this, Rory remains determined to pull off a prank, and he enlists his buddy Luke (John Dore, How to Live With Your Parents) to retrieve the stripper (Leah Renee, The Playboy Club). Luke, whose life has become stagnant with a dead-end job and nonexistent sex life due to having one daughter and another child on the way, begins to question his life choices in the presence of this smoking hot stripper who is definitely flirting with him.

This film missed its mark completely, traveling very far away from what I expected. My impression was that this was supposed to be a simple raunchy comedy that involved a great prank and a pineapple; what it turned into was a bunch of splintered stories that ultimately made no sense and were just a complete waste of time. When I laughed, it wasn’t really because I found anything funny, but due to the fact of how far the film had strayed from what it was supposed be. For one, if you go through the trouble of finding recognizable actors, it may behoove you to actually use them; the most I can say about Faison and Martino’s appearances is that they should be viewed as cameo appearances, and mostly filming their parts was not very time-consuming.

Of the three splintered stories, the only that had the potential to be moderately interesting was the one involving Luke and the stripper, and all the possible the intrigue stemmed from curiosity about whether not he would act out his desire (I’m pretty sure you can figure out how it ended), but it turned out to be a cliché of scenes seen a dozens of times before.

Jeremy Butler is a film school graduate of the International Academy of Design and Technology. He is been writing for Upcomingdiscs since 2012; however, movies have played a big part of his life for much longer. Favorite genres include horror, science fiction/fantasy, and comedy. Favorite movies are V for Vendetta, Boondocks Saints, Kiss Kiss Bang Bang, and The Godfather.
Shadow Dancer Women Who Kill