Kiss of the Damned

Posted in: No Huddle by Brent Lorentson on September 5th, 2013 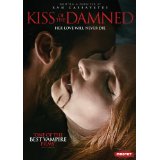 There are so many vampire films, it’s hard to get excited any time a trailer for one comes along.  The Twilight series as well as shows like True Blood and The Vampire Diaries have managed to take everything I once enjoyed about the menacing creature and turned it into a joke.  Let the Right One In and the American remake Let Me In are the last vampire films that had any substance that went for more than cheap thrills and gore and delivered a solid story.  That is until Kiss of the Damned came along.  It’s a film that keeps things simple, yet brings back the beautiful elegance of the creature we loved to fear.

When we first meet Djuna (Josephine de La Baume), she is locked away in her large beautiful home watching an old B&W romance.  She’s lonely and craves affection, but her affliction of being a vampire doesn’t offer many opportunities to meet the dashing male she is looking for.  But as her luck would have it, a trip to the video store has Djuna coming face to face with her true love Paolo (Milo Ventimigilia), a screenwriter who has come to town to get away and work on his current project.  The two are instantly attracted to one another, but Djuna does all she can to keep Paolo at a distance, afraid of what he may think of her and the harm she may cause.  But he’s persistent, and in the heat of passion she takes a bite and changes him.

No time is wasted with the film; every scene moves the story along, and though it sticks with the traditional views of vampires, Djuna is among a community of other vampires, all of whom are wealthy and powerful but have chosen to not feed on humans but instead on animals and synthetic bloods.  As Djuna guides Paolo into the new lifestyle and everything seems to be going well for the two bloodsuckers, Mimi (Roxane Mesquida) comes along.  Mimi is not as refined as Djuna despite them being sisters; Mimi relishes the creature she is and doesn’t hold back her sexual inhibitions or her hunger for human blood.

As Mimi settles into Djuna’s home as she awaits going to a vampire detox facility in Phoenix, Mimi spends her time wreaking havoc on the lives of Djuna and Paolo. The subtlety of Mimi’s influence is what makes this performance great; we know what she’s up to, but she never forces the characters into any situation; she instead just points them in the direction of their weakness whether it be as primal as sex or blood.

Though the idea of a vampire romance has been done to death, this story manages to remain fresh and even has moments where the vampire lifestyle again feels sexy and inviting.  Keeping the vampires grounded in reality, no super speed and no freaking sparkling, allows us to see the humanity that remains in these creatures and that has always been what I felt connected us to them.  This embraces the thought of being with your true love, in the prime of your lives and never having to change; it’s the fantasy I believe anyone would indulge in if given the chance to make it a reality.  Even when Djuna and Paolo cave to their weaknesses, they are able to see beyond the short term pain and appreciate the future that awaits the two of them.  Perhaps it’s this level of forgiveness that seems so fantasy-like in a time when so many of us who will die will carelessly throw away a relationship with their “true love”.

Written and directed by Xan Cassavetes, the daughter of director John Cassavetes, as a first time feature this has the execution of a director at their prime, and she’s only getting started.  The camera movements throughout are simple yet beautifully framed, though I did notice at times there seemed to be some editing issues, most notably at the bar when Djuna and Paolo first talk. As the scene cuts between the two their placement seems to move; aside from this scene being a bit off-putting, the rest of the film exceeds and all can be forgiven.

Though I’d have a hard time putting this film anywhere near the caliber of Let the Right One In, which in my humble opinion I believe to be a masterpiece.  Kiss of the Damned is a small film that delivers a bloody and elegant slap to remind us what vampires once were and should be.  The horror isn’t in how ferocious they are or how hideous they may be; the horror is their ability to seduce us from the life we have and take us to a place darker than we realize.

Brent Lorentson is a horror writer and film critic based out of Tampa, Florida. With a BA in Digital Film, he co-wrote and co-directed Scavenger Hunt. His short stories have appeared in various horror anthologies. In 2019 his short script Fertile Blood will be a part of the anthology horror film Slumber Party. He is currently working on his first novel A Dark and Secret Place set to be released in late 2019. Favorite Films: Taxi Driver, Fight Club, I Saw the Devil, The Wild Bunch, Dawn of the Dead, A Clockwork Orange, Pulp Fiction, Heathers, The Monster Squad, and High Fidelity.
Scandal: The Complete Second Season Da Vinci’s Demons: The Complete First Season (Blu-ray)