Posted in: Disc Reviews by Gino Sassani on September 5th, 2013 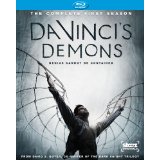 “I believe man will fly. And I base this assumption on the fact that God has blessed us with minds that are capable of imagining it. Anything that can be dreamt of will eventually be built. Anyone who says otherwise is a fool.”

The term “Renaissance man” is often used to describe a person who has a very wide range of interests in which they have become quite skilled. It’s taken from the traits of the many artists, innovators and writers of the 15th century. And while the term might well apply to any number of such historical figures, there is none for whom it is more apt than Leonardo Da. Vinci.

He might not have been the first to imagine human flight, but he was the first to sketch models of aircraft that actually could achieve it. He invented military weapons such as the tank, fragmentation bombs, and multi-barrelled cannons. And like the scientists who developed and tested the first atomic weapons in the deserts of Nevada, he spent much of his later years frightened by the prospects of his own genius. Some considered him mad. He was quite the ladies’ man; he left us with an image of the most famous woman in history, and no one even knows her name. We merely refer to her as Mona Lisa. Rich history and character like this could not long be ignored by the powers that be in Hollywood. Enter Starz’s original series Da Vinci’s Demons.

There is a strong trend in television shows these days to depict famous historical figures in their younger days, the moments of their lives less chronicled, the days before they reached the kind of fame or notoriety that allows their names to pass through history unforgotten. It doesn’t even matter if they are real or fictional. Lately shows have delivered young, yet unknown versions of Al Capone and Henry VIII along with the likes of Norman Bates or Hannibal Lecter. Da Vinci’s Demons introduces us to a young Leonardo, played by Tom Riley, who is just now coming to notice by the Medici Family, rulers of the city-state of Florence.

Riley is a rather interesting choice for the part. He certainly has an impressive range as an actor, essential to this part. He plays Da Vinci as both inspired and eternally frustrated. He finds his genius as much a curse as a blessing. It’s likely true that Da Vinci’s own frustrations grew out of others’ inability to see what was as clear as day to himself. He was a bastard son, which meant he had a social status to overcome as well. Riley’s Da Vinci is certainly on the edge of madness. He is haunted by the drug-induced dreams of a mysterious Al-Rahim, played By Star Trek: Deep Space Nine’s Alexander Siddig. We don’t really know if this man is real or not. Da Vinci also encounters others in these dream states and they seem to be pushing him to find a mythical Book of Leaves that holds almost spiritual implications.

In his awake state Da Vinci has caught the attention of the City’s patron Lorenzo Medici (Cowan). Medici is patient as Da Vinci creates his canon that can fire from many barrels at once. Even after first failure, he has faith that is eventually rewarded. Florence is in a cold war with Rome, and it’s about to turn hot under the ambitious leadership of the Pope’s nephew Girolamo Riario (Ritson). Riario is also aware of Da Vinci’s dream-quest. He holds a key, a companion to one Da Vinci finds in the stomach of an executed thief. Da Vinci has also discovered a book that appears to be a map to some magical vault that promises to unlock mystic secrets. Riario threatens Florence as the representative of Rome, but he is often sidetracked by his personal rivalry with Da Vinci.

Da Vinci is played as more of a quirky detective than artist. He’s actually pretty frustrated with art at this point and is more obsessed with his quest. In fact, his relationship with Riario is very much like a Holmes/ Moriarty dynamic. As Da Vinci puzzles out his mysteries we see flashes of symbols and animations meant to show us his brain functioning. Slow motion birds in flight capture Da Vinci’s thoughts as they reveal their secrets of flight. Sketches illustrate his process as he comes to another brilliant conclusion. These things appear all around the screen as if Da Vinci himself were studying them in the air around him. At times it’s distracting, at times somewhat illuminating. While the performance is certainly strong, Riley looks and acts too much like a modern character to be believable as Leonardo Da Vinci. It’s a captivating performance that just never really fits the character. Instead I find myself relating to him as more of a Monk or Castle character than the historical Da Vinci. He’s also quite the talented swashbuckler with a sword.

Da Vinci is assisted in his work by two very faithful assistants. Nico (Vlahos) is a young boy who looks at Da Vinci with blind admiration. Zoroaster (Chillin) is the roustabout assistant who would often rather be partying than working. Not that Da Vinci doesn’t have his own weakness in that arena. Lucrezia (Haddock) is a Roman spy who has managed to ensnare the romantic attentions of both Da Vinci and Lorenzo Medici. She manages to bring much damage to the Medici family and Da Vinci’s search.

The set pieces are a mixed bag here. The stuff that is real and was actually constructed is quite remarkable. Many of these sets are authentic in their smallest detail. They give wonderful places for these performances to live. The digital work, however, isn’t quite as spectacular. Much of it is obvious in the set extensions and backgrounds. They look OK but never quite convincing. This isn’t the same kind of effects work found in shows like Rome which likely had larger budgets. It’s television and it works, so you allow yourself to ignore these flaws. It’s filmed in England and not Italy, so the vista shots that are not digital won’t necessarily put you in the correct atmosphere. That really just means more CGI, unfortunately. Of course, the symbolic work in Da Vinci’s brain is intended to look artificial and serves a symbolic purpose. This is the kind of thing you’ll either love or hate.

The show was created by David S. Goyer, and he certainly brings some of that Dark Knight aspect to the show. Da Vinci even gets to use bats in a daring plot to escape a prison cell. You’d think Goyer a busy man what with his current scripting chores on the upcoming Superman/Batman film. In the past television hasn’t really proved his medium, but here the restrictions of network television fall away and allow him to explore, and explore he does. The show is quite stylish, at times to its own distraction. Goyer is actively involved with the scripts and look of the show, and his handiwork is quite apparent.

Not much is known about the early years of Da Vinci so that much of this fictionalized story doesn’t stand out quite so badly. At times they reach. One episode brings Da Vinci to Dracula’s castle where the two share some interesting screen time together.

I once attended a Renaissance fair where there were special days for some countries. I asked why Italy was not represented. The lady replied, “What did Italy have to do with the Renaissance?” Hey Lady, this is what they had do do with it.

The Dolby Digital TrueHD 5.1 track is also a bit of a mixed bag. Certainly it serves mostly to bring us the dialog. There are some nice surround moments. The subs come alive quite a bit during some of the few explosive scenes. One of the best aspects of this show is the music. The Bear McCreary score is absolutely outstanding. It’s a haunting melody that stays with you for a while. I’ve actually lingered on the menus just to listen to it. There appeared to be some issues with ADR work.

Mastering Da Vinci: (3:22) A very welcome look at composer McCreary and the score.

Constructing Da Vinci: (2:47) Sets were built in places like an abandoned Ford factory. They’re impressive and deserve more than the brief look here.

Worldwide Fanfare: (2:42) This piece covers the cast and crew at a New York ComicCon and the premiere in, where else? Florence.

Finally, the show spends quite a bit of time on the sex and gore. We saw this on Rome and on the Spartacus shows, but I wish I could believe it was used here merely to move the story along. It often appears out of place and gratuitous. Certainly less than on the shows I mentioned, but particularly in Spartacus that was really the focus of the show. Here it is not, or should I say should not be. Yes, I know we’re on cable, but take a page from these inventors. Just because you can do a thing does not mean you must do a thing. There is rich enough material to explore that is often distracted from with the rest. Of course, there’s a reason filmmakers do these things. “I can’t pass a guilty verdict without appearing corrupt myself.”

Gino Sassani is a member of the Southeastern Film Critic's Association (SEFCA). He is a film and television critic based in Tampa, Florida. He's also the Senior Editor here at Upcomingdiscs. Gino started reviewing films in the early 1990's as a segment of his local television show Focus. He's an award-winning recording artist for Omega Records. Gino is currently working on his 8th album Merchants & Mercenaries. Gino took over Upcomingdiscs Dec 1, 2008. He works out of a home theater he calls The Reel World. Favorite films: The Godfather, The Godfather Part II, The Body Snatcher (Val Lewton film with Karloff and Lugosi, not the pod people film), Unforgiven, Gladiator, The Lion King, Jaws, Son Of Frankenstein, The Good, The Bad And The Ugly, and Monsters, Inc.
Kiss of the Damned Parade’s End