No Place on Earth

Posted in: No Huddle by Jeremy Butler on September 10th, 2013 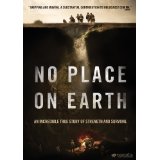 Survival, Endurance, Adversity, and Courage took on new meaning for me after No Place on Earth. They say that you can never judge a person until you’ve walked a mile in their shoes and experienced their life. Well, I haven’t walked that mile, but the documentary did give me a first-hand account of the 511 days the Stermer family spent underground during the Holocaust. After seeing what that family went through firsthand (or at least as close as I could get to firsthand) only one world truly describes my opinion: Awe.

October 1952: Esther Stermer is living a quiet life surrounded by her family. Then the Nazis come, capturing every Jewish family and taking them to concentration camps. Neighbor turns on neighbor in the clamor to survive. Esther, knowing it is only a matter of time before she and her family are taken, acts quickly trying to find a place to hide from the Nazi forces. Their refuge came in the form of an underground cave. Forced to remain there for the foreseeable future, Esther along with her children and grandchildren battle to survive against starvation, dehydration, and the ever looming danger of Nazis, achieving the longest recorded uninterrupted underground survival occurrence in history.

As I said above, the only way to understand the struggles of others is to witness them with your own eyes or as close as you get to it. True that watching a reenactment of the events is not the same as being there, but when that reenactment is coupled with the narrative testimony of the surviving family members and told through eye of an impartial party, it is pretty close. I’m not a real history buff, and tales on that subject matter usually don’t interest me, but No Place on Earth was the exception to the rule. The documentary possessed an uncanny ability to draw me in and immerse me in the story of this family struggle to survive.

The story is told on two fronts; the first front is through the narrative of the surviving members of the Stermer family: Sam Stermer, Saul Stermer, Sonya Dodyk, Sima Dodyk, and Sol Wexler. This is where the audience receives the bulk of the information about the experience of living underground; this is the true heart of the story. Of the two fronts, this was the most immersive aspect without question. The reenactment is helps illustrate things, but it is through the narrative that the picture is truly painted as the talk about the constant hunger, betrayal by people they trusted and depended on, the several attempts that were made on their lives, and the euphoria that came when they were finally able to rejoin the world after 511 days.

The second front follows Chris Nicola, the New York cave diving enthusiast who just happened on the family’s cave and discovered the remnants of their time within it. Through his eyes, we watch his engrossment, his investigation, and his desire to learn what happen to the family. He highlights that learning the truth was long and uphill battle; it is interesting to watch the lengths that Nicola went to find the truth; he was truly a dog with a bone.

The film comes full circle and ends on excellent note which involves a reunion of sorts. I won’t give away the details, because in my opinion it is by far the best part of the entire experience. In conclusion, I was aware of the tragedy of the Holocaust intellectually by way of what I read in textbooks and was taught in school, but I didn’t know what it was like from a human level, not until No Place on Earth.

Jeremy Butler is a film school graduate of the International Academy of Design and Technology. He is been writing for Upcomingdiscs since 2012; however, movies have played a big part of his life for much longer. Favorite genres include horror, science fiction/fantasy, and comedy. Favorite movies are V for Vendetta, Boondocks Saints, Kiss Kiss Bang Bang, and The Godfather.
Enlightened: The Complete Second Season Star Trek Into Darkness (Blu-ray 3D)