Posted in: No Huddle by Archive Authors on September 10th, 2013 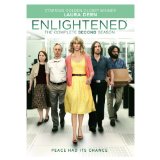 Earlier this year, I reviewed Enlightened Season One and said about Laura Dern’s character that she “has so many outrageous outbursts of issues great and small that most people have dismissed her as crazy and just wish she would go away.” Now we are back with Season Two, and all of the potential craziness of Season One is ready to spill and overflow in an uncontrollable fashion. Originally conceived with a three-season arc, it is my sad duty to report that it is unlikely we will ever see the promised Season Three. Many shows have met an untimely demise like (the not so aptly titled) Luck, John from Cincinnati, Carnivale and The Big C. The Big C was given a very generous opportunity to come back with an abbreviated four-episode fourth season to conclude its heroine’s story. I wish the same could be said of Enlightened. Enlightened was not renewed for a third season despite almost unanimous pleading from the nation’s critics. It is always disappointing when a great series with compelling characters doesn’t get to complete telling the story to the end. Two great series, Dexter and Breaking Bad, are in the middle of their final episodes, and nothing is more satisfying.

Enlightened Season One was about recovery. Season Two seems to be about revenge. Laura Dern’s character, Amy, seems to be trying to sort through many confusing and unsettled feelings. Amy decides to focus on bringing down the company she works for. She has good reasons, but which are the real reasons? Her company is corrupt and dangerous, but is she merely motivated by petty feelings of rejection? Amy is a constantly shifting mass of conflicting emotions, good intentions, and bad impulses.

Her ex is now doing rehab at the same holistic facility in Hawaii that she recently graduated from. Her co-worker, Tyler (played by show creator, Mike White) is easily manipulated, coddled and pressured into aiding a somewhat incompetent and unfocused Amy. Her immediate supervisor thinks she’s the worst employee ever. Her play is to get sensitive information to Los Angeles Times reporter Jeff Flender (Dermot Mulroney). Personal ethics soon go out the window. The information she uncovers becomes more and more troubling for more and more reasons. Amy fixes up the painfully shy Tyler with the CEO’s personal assistant, Eileen (Molly Shannon). Amy’s motives are mostly corporate espionage, but Tyler’s world is about to be opened up. Eileen muddies the waters even further by helping Amy get a meeting with the embodiment of evil, Charles Szidon (James Rebhorn). She might get that corporate community outreach job she brainstormed about in the first season.

Amy is unlikeable yet sympathetic, controlling yet helpless, sad yet ridiculously optimistic. Her fall from grace last season made her fearless but acutely aware that she must hide her true feelings. At times she is unbearably cloying and at other times, profoundly sympathetic. We know she is right about many things even while she is so obviously out of touch. This is the kind of character that wins Emmys and Golden Globes, as Laura Dern did in the first season.

More top directors join in this season, like Nicole Holofcener and Todd Haynes, but the core and heart of the show remains triple threat writer/actor/director Mike White. He is omnipresent on the many commentaries and extras. White is the epitome of downtrodden in his portrayal of Tyler and clearly understands the outsider and the bullied. He understands that the oppression in society creates monsters on both sides of the picket line. Bullies don’t only exist in schools but at every strata of our culture. The meek and odd bullied enough will rise up and wreak havoc. More often than not they will be right. It is important to care about what is right and good even if it is only to save your own skin, because eventually the meek will inherit the Earth.

Portnoy/Sheehan/MacAlpine/Sherinian: Live in Tokyo (Blu-ray) No Place on Earth