Posted in: No Huddle by Brent Lorentson on September 20th, 2013 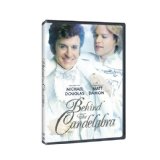 Even though director Steven Soderbergh (Traffic, Ocean’s 11, Magic Mike) has an Oscar under his belt and numerous box office hits, the road to getting Behind the Candelabra was a difficult one.  Originally Soderbergh had planned for the film to play in theaters, but every studio was afraid of the project believing it to be “too gay”.  Sure, there have been numerous films in Hollywood that dealt with homosexual subject matter, and considering this was also a bio pic I’m still surprised the typically liberal studio system was so afraid of this project.  But thankfully the film found a home with HBO, and the result is an intense film that is more than just a look behind the closed doors of the famed Liberace but the loss of innocence once introduced to wealth and fame.

When we first meet Scott Thorson (Matt Damon), he is a young impressionable teenager who has a passion for working with animals.  But it’s after seeing Liberace (Michael Douglas) perform on stage that something begins to change for him.  Getting the chance to meet the performer after the show is one of those surreal moments in Thorson’s life, but it’s also the moment where Liberace first laid eyes upon him and when some would say the seduction and corruption began.  Thorson is young and impressionable from the beginning, clearly having issues with his sexuality.  Liberace knows how to work this to his advantage, distracting him with money and a comfortable lifestyle, and before Thorson can realize it he finds himself the lover and possibly the adopted child of Liberace.  If this were not strange enough for you, Liberace goes so far as to have Scott see a plastic surgeon so he can have work done to look like Liberace.

Rob Lowe (barely recognizable no less) steps in to play Dr. Jack Startz, who not only performs the facial reconstruction on Scott but also gets him started on the “California diet” which leads to Scott’s eventual substance abuse problems.  The surgery plays not just as  the peak of Liberace’s control over Scott, but it is also a shifting point in the film where the carpet seems to be pulled out from under us.  As viewers we are separated enough to see how things can only get worse for Scott, but he’s so jaded by love and money that his blind descent is frustrating to watch.

I can’t help but sympathize with Scott.  Damon’s portrayal of Thorson just may be the performance of his career.  Sure, he’s a bit old to be playing the innocent teenager at the start of the film, but his performance is so tender and vulnerable you forget this is the same guy who kicked ass in the Bourne movies or the dirty cop in The Departed.  Yet not to be outshone, Douglas’s portrayal of Liberace is equally as moving and dynamic as he plays the flamboyant predator, and despite his actions we continue to be, like many of his fans, just charmed by his personality.  These guys deserve every nomination and award they get; these are performances that are raw and hard-hitting as well as being nothing like we’ve ever seen from the two before.

Not to be overlooked, Dan Aykroyd puts in a solid performance as Liberace’s manager, a man who has seen it all and is trying to make an honest buck while keeping his client away from negative headlines.  This is one of those subtle performances that is hard to appreciate on the first viewing, but as you see him manipulate things to keep his client working, I can’t help but feel we should be seeing so much more from Aykroyd.

As for Soderbergh’s direction of the film, I put this right up there with Traffic.  At face value none of the characters are really all that likeable, but Soderbergh doesn’t shoot them with a judging lens, but instead sucks us into their world where morality is nothing more than an afterthought.  The sex scenes are crude but shot with a tasteful eye, understanding these scenes are not to be seen as gratuitous but as part of the seduction and power Liberace has over Scott.  Aside from the many turbulent scenes that play out between Scott and Liberace, one of my favorite moments is towards the end of the film as Scott is being asked to vacate his apartment.  I’m hooked, not because of anything flashy but because this scene works so well in my eyes as I simply have no idea how it’s going to play out.  Everything comes together, and even though I know how the story ends as I’m watching it, I can’t help but think of the numerous scenarios that could play out, and all seem equally as plausible as an outcome.

It’s a shame studios were afraid to give this film a chance, but I can understand the fears the studio had.  Sure, the world is becoming more accepting towards those who are gay, but to do this film justice, it can’t be shot with a censored eye that will look away; we need to see the truth in the actions of the characters, and unfortunately the world isn’t ready just yet for that.  The film already had the hurdle of its main characters being gay that it would have been too much, I believe, to dwell more on the aspect that when Thorson and Liberace first began their romance, Thorson was only 16.  Regardless of my feelings or anyone else’s feelings on the subject, the film is a tremendous achievement. Despite all the hurdles it had before it, the result is a touching and courageous feature.

Brent Lorentson is a horror writer and film critic based out of Tampa, Florida. With a BA in Digital Film, he co-wrote and co-directed Scavenger Hunt. His short stories have appeared in various horror anthologies. In 2019 his short script Fertile Blood will be a part of the anthology horror film Slumber Party. He is currently working on his first novel A Dark and Secret Place set to be released in late 2019. Favorite Films: Taxi Driver, Fight Club, I Saw the Devil, The Wild Bunch, Dawn of the Dead, A Clockwork Orange, Pulp Fiction, Heathers, The Monster Squad, and High Fidelity.
Prisoners Supernatural: The Complete Eighth Season (Blu-ray)