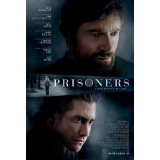 “You made me feel so safe. You told us that you could protect us from anything.”

Prisoners poses a lot of provocative questions. Chief among them is, “Who ultimately bears the responsibility of protecting one’s family?” Is it enough to leave these matters completely in the hands of dedicated, but hopelessly overwhelmed law enforcement officials? And, in a life or death situation, would you ever take the law into your own hands to save someone you love? My favorite thing about Prisoners, one of the best movies I’ve seen this year, is that the film respects its audience enough to withhold any easy answers.

The powerful new crime thriller revolves around the disappearance of two little girls. Keller and Grace Dover (Hugh Jackman and Maria Bello) are a suburban Pennsylvania couple celebrating Thanksgiving with their friends Franklin and Nancy Birch (Terrence Howard and Viola Davis). Each couple has a semi-surly teen and a precocious young daughter. Their casual get-together is shattered when Keller realizes the two young girls have gone missing. Maybe they were picked up by the driver of the ominous-looking RV that was hanging around their neighborhood earlier.

Enter the brash and ultra-devoted Detective Loki (Jake Gyllenhaal), who has solved every case he’s ever been assigned. (We know Loki doesn’t have a life because, when we meet him, he’s celebrating Thanksgiving in a Chinese food restaurant by himself.) Loki quickly tracks down the driver of the RV, a childlike, soft-spoken weirdo named Alex Jones (Paul Dano). Unfortunately, there’s no evidence of foul play in Alex’s RV, and the police are forced to let him go. Keller is convinced Alex is lying and, with the two girls still missing, takes desperate measures to find out the truth.

Prisoners is the English-language debut of French-Canadian filmmaker Denis Villeneuve (Incendies), and the film clocks in at a potentially butt-numbing 153 minutes. Villeneuve, working from a crackerjack script by Aaron Guzikowski, keeps the audience absorbed in the story by essentially delivering two terrific films in one. Prisoners is both an engrossing detective drama and an emotionally-gripping revenge film. A lesser crime thriller might focus primarily on either the vengeful family or on the detective trying to solve the puzzle, with the other storyline being relegated to the sidelines. Prisoners gives each of them equal weight. The filmmakers do this by mining drama out of moments that are alternately towering and quiet.

“Towering” and “quiet” are also good words to describe the respective work of Jackman and Gyllenhaal, who turn in career-best performances in this film. After earning his first Oscar nomination for last year’s Les Miserables and turning in his most layered performance as Logan in The Wolverine, Jackman has never been more interesting as an actor. He still carries his Wolverine brawn everywhere he goes, and it suits him here as manly survivalist Keller. (Not unlike the way Sean Penn brought his real-life surly edge to his Oscar-winning work as a grieving ex-convict/similarly vengeful father in Mystic River.) Keller has spent a good portion of his life preparing for the worst, but is woefully ill-equipped to handle this particular tragedy. Meanwhile, Gyllenhaal is nothing short of a revelation as Det. Loki. The actor has never been more magnetic, emanating both danger and authority as the intensely dedicated cop. I also appreciated how Guzikowski’s script resisted the temptation to give Loki a clichéd hard edge — like a drug/drinking problem — that the character didn’t need. Jackman and Gyllenhaal’s handful of scenes together are a study in big (Keller’s overwhelming rage) and small (Loki’s professional sympathy and waning patience) moments.

The rest of the star-studded, Oscar-pedigreed cast is also impressive. Dano is especially good as the would-be kidnapper. It’s a tricky, wily performance because we obviously know Dano is merely pretending to be a simpleton on film; so it’s not much of a stretch to feel like Alex Jones might be playing dumb too. Howard is affecting as a man who is too weak to make the choices Keller has made, and is also too weak to stop him. If anyone gets the short end of the storytelling stick, it’s the film’s supremely talented actresses. Davis (stronger-willed than her on-screen husband), Bello (as someone totally numbed by grief) and Melissa Leo (as Alex’s protective aunt) each get about one showcase sequence — and not much more — to flesh out their characters. At 153 minutes, there had to be a way to find something more for these talented actresses to do.

Then again, Prisoners unfolds in a deliberate way — particularly during those early Thanksgiving scenes — that invites the audience to take in every detail captured by the great Roger Deakins’ camera. The cinematographer once again delivers Oscar-worthy work. (I would say this movie has a chance of finally earning him a well-deserved statue…but I’ve seen Gravity.) A significant portion of this film’s running time is devoted to other abduction cases uncovered during Det. Loki’s investigation; I imagine these scenes will seem considerably less muddled on repeat viewings.

Prisoners goes to unexpected places and has a decent amount of surprises, not the least of which is where your sympathies will lie from scene to scene. So the best advice I can give you is simply to “be ready.”