Posted in: No Huddle by Brent Lorentson on September 23rd, 2013 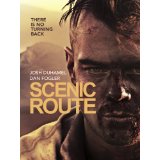 The idea of taking a long road trip with your loved one or best friend is something everyone has to do at least a few times in your life.  There is something that occurs while driving down long lonely roads with nothing but music, scenery and good conversation to keep you company.  The road trip film is almost a genre onto itself and can be funny like Plains, Trains and Automobiles, insightful like On The Road, or horrifying like Joyride.  These films are so easy to relate to, because at some point we all share in these kinds of adventures, perhaps not so exciting but memorable nonetheless.  As for Scenic Route, it explores what can go wrong when you decide to take the long way home to take in the scenery, especially when there is a rising tension between two best friends.

Mitchell (Josh Duhamel) and Carter (Dan Fogler) have been lifelong friends, but since Mitchell got married the two have seemed to drift apart.  To make up for lost time, Carter decides to plan a long road trip that takes them through Death Valley and hopes that this quality time together can help bring the two closer together.  Unfortunately Mitchell isn’t much for the scenery and not so big on talking, leaving Carter to make a drastic decision to stage the car breaking down.  This is the first of many confrontations between the two as we discover how Carter feels Mitchell jumped into his marriage after getting out of a bad breakup.  Mitchell, on the other hand, believes his wife is the best thing to happen to him and that getting married is simply what people do when they get older.

This first argument really is the only argument the two have, only it goes on for the entire film.  Things are not black and white, as Mitchell seems to want to make the argument for growing up and following the path that is expected of you, whereas Carter seems to be a believer in following your dreams and chasing down happiness.  Of course both have their own merits and are correct, and this conflict of opinion does present plenty of material to keep things interesting in the barren landscape.

It’s after a kindhearted good Samaritan stops by to assist the duo that Carter comes clean about staging the break down.  This is the start of the tension between the two escalating, and for the most part it’s hard to not agree with Mitchell on the stupidity of Carter’s actions, no matter how innocent he may have intended it to be.  And it’s when the truck really does break down leaving the two stranded that things only continue to grow more heated between them.

I’m not much of a Duhamel fan, and the same goes with Fogler, but I was surprised by how well these two worked in this film.  Considering it’s dialog that drives this film, the two seem to be pushing themselves and manage to bring out the best performances I’ve seen from either one of them.  Neither one is the clear-cut good guy or bad guy; they are simply average guys who have made bad decisions in life and are trying to make the best of it.

As much as the performances worked, I feel this could have been a more intriguing film had the two been females instead.  Not because a lot of the dialog feels a bit too touchy-feely at times, but the plot does feel familiar, and the stakes just never seem high enough.  And when it comes to the decisions the characters make every time someone passes the truck, it’s frustrating to the point of wanting to throw my hands in the air and curse the characters.

But as the film winds down and comes to its conclusion, it manages to redeem itself for the flaws earlier.  The film makes a valiant attempt to deliver a poignant message about life and how we deal with happiness and how hard it can be to accept reality.  I’m not about to say the film is a motivational film with a message everyone should take to heart, but it was nice to see it attempt to deliver a little something more than a tidy ending, but instead something to think about, not just necessarily in the confines of the film but ourselves as well.

Brent Lorentson is a horror writer and film critic based out of Tampa, Florida. With a BA in Digital Film, he co-wrote and co-directed Scavenger Hunt. His short stories have appeared in various horror anthologies. In 2019 his short script Fertile Blood will be a part of the anthology horror film Slumber Party. He is currently working on his first novel A Dark and Secret Place set to be released in late 2019. Favorite Films: Taxi Driver, Fight Club, I Saw the Devil, The Wild Bunch, Dawn of the Dead, A Clockwork Orange, Pulp Fiction, Heathers, The Monster Squad, and High Fidelity.
A Letter to Three Wives (Blu-ray) Criminal Minds: The Eighth Season