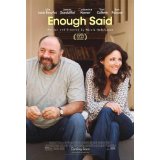 I honestly expected to be bummed watching Enough Said. The film marks the penultimate screen appearance by Sopranos icon James Gandolfini following his untimely death from a heart attack in June. So while I always looked forward to watching Gandolfini, there was an undercurrent of sadness in knowing this was one of the last new performances we’d ever be getting from the immensely talented actor. Thankfully, Gandolfini’s work here is as lively and funny as the rest of this romantic comedy, so you’re more likely to walk away with a smile on your face than a tear in your eye.

Enough Said is the story of a masseuse named Eva (Julia Louis-Dreyfus), who begins dating likable, low-key TV historian Albert (Gandolfini) after meeting him at a party. Eva and Albert bond over their shared status as lonely, divorced parents whose daughters are about to head off to college. Meanwhile, Eva’s new favorite client is Marianne (Catherine Keener), a poet she met at the same party who appears to be perfect in every way…except that she can’t stop ragging on her ex-husband. So imagine Eva’s horror when she realizes the “loser” and “slob” of an ex-husband Marianne has been mercilessly slamming is actually “Fat Albert.”

“Our middle-agedness is confident and sexy to me.”

Writer-director Nicole Holofcener has crafted a refreshing and exceedingly witty romantic comedy about adult relationships. I say “refreshing” because it seems movie audiences have had their fill of watching the likes of Katherine Heigl bumble their way through another painfully cliched rom-com. (Heck, even Katherine Heigl appears to be done with crappy Katherine Heigl rom-coms!) Enough Said, on the other hand, has interesting things to say about the way adults relate to each other, as well as they way they relate to their growing children.

The film isn’t totally free of hijinks, especially when Eva slowly beings morphing into the hypercritical ex-wife Albert thought he’d escaped. There were a few recurring bits — an incompetent maid, a trio of Eva’s quirky clients, and Albert’s inability to whisper — that seemed more at home as sitcom plots than they did in this movie. Speaking of sitcoms, Albert’s job as a TV historian allowed Holofcener to take a few swipes at some of the trashier modern shows; those jabs felt a bit shoehorned into the story, even if they were totally merited. I also found Eva’s squabbling married friends, played by Toni Collette and Ben Falcone, to be too cartoonish, at least compared to the more grounded way the film presented Eva’s separate relationships with Albert and Marianne.

Obviously, most of the attention will be paid to the fact that this is Gandolfini’s next-to-last film, but it should also be noted this is Julia Louis-Dreyfus’ first live-action movie in 16 years(!) and her first-ever starring role on the big screen(!!). Louis-Dreyfus, who at least one critic has called the “finest comedic actress working today,” transitions to the movies smoothly, and ably carries the story with her impeccable comedic timing and unforced radiance. Keener, who has starred in every one of Holofcener’s movies, is alluring and earthy as Marianne. Keener is so good, in fact, that it takes the audience longer than it should to figure out Albert’s bad habits weren’t the only reason Marianne’s marriage failed.

Still, Enough Said is unquestionably at its best when Gandolfini is on screen. This is easily the best and most successful departure for the actor since he stopped playing Tony Soprano. After his sudden passing a few months ago, the tributes from Gandolfini’s friends and colleagues poured in and they all had one thing in common: everyone talked about what an uncommonly sweet person “Jim” was in real life. Holofcener deserves credit for being one of the few filmmakers to successfully tap into that side of Gandolfini as a performer. The director also had enough imagination to harness two of the actor’s most underrated traits — his dry, wicked sense of humor and his unconventional attractiveness — for this movie. (Gandolfini’s last film, a crime drama called Animal Rescue, is due next year.)

The actor gives a performance that should absolutely be remembered as we head into the maelstrom known as “awards season.” And I promise you I would’ve typed that previous sentence even if Gandolfini were still alive. (He’s that good in this movie.) While his death certainly gives the performance some added poignancy — especially whenever Eva or Marianne give Albert a hard time about his weight — Gandolfini’s work in Enough Said is an unequivocal affirmation of his colossal heart and talent.