Posted in: The Reel World by Brent Lorentson on September 27th, 2013 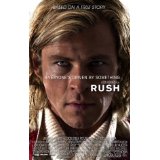 After first seeing the trailer for Rush the first thing that came to mind is how the film looked like nothing director Ron Howard (Apollo 13, Backdraft, Parenthood) had done before.  Set in the world of Formula 1 racing where everything was about speed, style and sex, this seems like a world far removed from the wheelhouse we expect from Ron Howard.  But upon watching the film, beyond the tremendous visuals on the track we are given a story that is more than just a simple rivalry, but a story about the drive to succeed at any cost whether it be by skill or obsession and envy; what matters to these men is to be number one.

Chris Hemsworth buckles into the driver seat as James Hunt, the English driver who plays the part more as a rock star of the track than your typical driver. He parties, he drinks, and he thrusts himself between the sheets of nearly every beautiful woman who crosses his path.  He knows every lap around the track comes with the risk of certain death, but this only pushes him to enjoy life to its limits when he is off the track.  But Niki Lauda (Daniel Bruhl of Inglourious Basterds fame) approaches the track with respect and is methodical with every step towards getting behind the wheel and racing.  Where Hunt simply lets the mechanics do their job to deliver a car for him to race, Lauda is there helping design the car and giving his input to ensure his car is the fastest one on the track.  It’s these obsessive personalities that collide on and off the track that deliver the real drama of the film.

As the story drifts away from the track and into both Hunt’s and Lauda’s lives, we continue to see the contrast of the characters; where Hunt wastes no time in proposing to Suzy Millar (Olivia Wilde) one day as she tours the garage, Lauda instead meets Marlene (Alexandra Maria Lara) and takes cautious, deliberate steps in courting her.  Seeing Niki and Marlene develop together as a couple is sweet and refreshing; finally it seems Niki will be on the receiving end of some well-deserved happiness as she remains loyally at his side.  It’s not that Suzy doesn’t care for James, but she is busy with her own modeling career.  These are not the women we’re used to seeing cheering from the bleachers and biting their nails with every close call.  These women instead understand the men they are bound to and that their lives can be extinguished during every race; they maintain their grace by holding their heads up and choose not to falter until there is reason to have concern.

The drama unfolds as Hunt and Lauda share the leader board throughout the race season, though Hunt seems to continue to stay in Lauda’s rearview.  It’s before a race where the black top is slick with rain that Lauda decides to hold a vote to determine if the race should be canceled or not.  Despite the concern for safety the drivers decide to continue with the race, and, well of course, this is when disaster strikes.  For those who don’t know the story, I’ll refrain from any details but go on to say one of the drivers is seriously injured, and this jeopardizes his chance at winning the championship for the season.

From this point of the film on, the human story between the two rivals is touching in the most testosterone-driven way.  The respect these men have for one another is something that doesn’t seem to be seen in sports these days, or at least it is not thrust into the spotlight as much as this rivalry is.  The drive to compete between these two men is inspiring while at the same time frightening, especially as we see how things unfold in the final race.  It’s one of those instances had it not been documented it would be hard to believe it ever happened.

As for Howard’s direction, I can’t say this is one of my favorite films of his, but visually what he accomplished here is exciting and breathtaking.  The camera positions inside and around the formula cars sucks us into the racing environment and allows us a glimpse at the insanity of what it must be like behind the wheel speeding around tight turns while trying to out maneuver another driver.  And when the story follows the men off the track, we get to see Howard shine at pulling tremendous performances out of everyone involved.

What I do have a slight issue with is the decision on the look of the film.  All the bright lush color seems to be sucked from every frame, and instead we are given this very dreary, dirty look that feels unnatural for a Howard film.  That being said, seeing the abundance of nudity and pervasive strong language, it seemed like Howard has taken a note from the Formula drivers and departs from his typical squeaky-clean image and makes some edgy choices to depict the lives of the racers as faithfully as possible.  I’m not trying to say the film dabbles into anything dark and depraved, but this is a bit of a departure from the films we’ve become accustomed to.  Personally I’m glad to see the departure, and I think it’s great to see he’s pushing himself style-wise to give the audience the best film possible.

Sure, this is a fun ride with some great performances, but we’re in that time of year where Hollywood gears up to crank out their big guns for award season, and I’m not so sure how Rush will stack up against the competition.  Not everything is about awards, but if you were to ask James Hunt or Niki Lauda, I’m willing to bet they’d disagree.

Brent Lorentson is a horror writer and film critic based out of Tampa, Florida. With a BA in Digital Film, he co-wrote and co-directed Scavenger Hunt. His short stories have appeared in various horror anthologies. In 2019 his short script Fertile Blood will be a part of the anthology horror film Slumber Party. He is currently working on his first novel A Dark and Secret Place set to be released in late 2019. Favorite Films: Taxi Driver, Fight Club, I Saw the Devil, The Wild Bunch, Dawn of the Dead, A Clockwork Orange, Pulp Fiction, Heathers, The Monster Squad, and High Fidelity.
Enough Said Don Jon