Posted in: No Huddle by Brent Lorentson on October 2nd, 2013 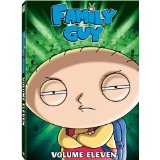 Family Guy has reached a level of impact upon the American pop culture where I believe the characters need little to no introduction.  Is there anyone, really, that doesn’t recognize Stewie; after all he’s reached the status of icon and has even become a fixture of the Thanksgiving parade as one of the many floats.  Where The Flintstones, then later The Simpsons were at one time the dominating animated family on the television tackling day to day struggles of the modern American (each in their own and unique way), Family Guy (love it or hate it) now seems to be the go-to animated family.

In this collection of 23 episodes, the creative force, Seth Macfarlane, and his team continue to deliver the laughs along with their twisted moral messages.  Instead of jumping right into it and discussing the season’s lows and highs, I want to mention the oddball of the group Screams of Silence: The Story of Brenda Q.  In what starts out as an amusing tale about Quagmire barely escaping death while experimenting with some kinky sex, quickly the story shifts instead to the abusive relationship his sister is in.  For television, with the added bleeps it may not have seemed so harsh, but with the uncensored set the viewer stands by and watches the verbal, physical and emotional abuse Brenda goes through, and it is intense.  The gang feels there is little to do knowing Brenda will never leave the boyfriend, so they decide to schedule a camping trip where they plan to kill him and have it look like an accident.  Before any feminist groups get upset feeling the show is making a joke out of abuse towards women, surprisingly it’s the opposite; the episode is dark and at times uncomfortable and shocking as the story unfolds.  For a twenty-two minute episode they cram a lot in to deliver a message as subtle as it may be, but I applaud the creative team behind it for using their creative forum to get their message out.

As for the rest of the set, I feel this is a stronger batch of episodes than the previous volume.  Back to the Pilot has Stewie and Brian traveling back in time to the pilot episode, and Brian has a bright idea to tip off the old Brian about the 9/11 attacks, and the result leads to an amusing butterfly effect that causes Brian and Stewie to have to go back in time to prevent themselves from telling their past selves about the attack.  My favorite guest appearance in the show was none other than Ricky Gervais as an obnoxious dolphin in Be Careful What You Fish For.

The standout episode for me was Leggo My Meg-O where the show does their version of Taken where Brian and Stewie head to Paris after Meg is kidnapped by a human trafficking ring.  A close second would be the last episode of the volume Internal Affairs which plays as a sequel to last season Foreign Affairs, only this time it’s Joe who dabbles in the infidelity department this time.  Seeing the flashback to how Joe met Bonnie as Africa by Toto plays was a priceless moment for me.

This is a show that I believe could benefit if they were to shorten the series, where they can aim for quality over quantity.  Between all the writing and the animation a lot of time is thrown into every episode, and it’s hard to be funny all the time.  The only real dud for me this volume was with Tea Peter where Peter gets on the Tea Party bandwagon.  It’s a forgettable episode, but it could be worse.

This is a show I love to watch and is something I can always sit down and enjoy.  For some family-friendly entertainment you’re better off watching the show on syndicated TV, because the DVDs offer up the episodes non-censored, and it’s still a little jarring at times watching the episodes censor-free.  Where the show may be running short on laughs, I wouldn’t mind seeing a little more seriousness at times as long as the show continues to hold up its quality, I’ll take quality over a cheap desperate joke any day.

Brent Lorentson is a horror writer and film critic based out of Tampa, Florida. With a BA in Digital Film, he co-wrote and co-directed Scavenger Hunt. His short stories have appeared in various horror anthologies. In 2019 his short script Fertile Blood will be a part of the anthology horror film Slumber Party. He is currently working on his first novel A Dark and Secret Place set to be released in late 2019. Favorite Films: Taxi Driver, Fight Club, I Saw the Devil, The Wild Bunch, Dawn of the Dead, A Clockwork Orange, Pulp Fiction, Heathers, The Monster Squad, and High Fidelity.
Modern Family: The Complete Fourth Season (Blu-ray) “31 Nights Of Terror” Tampa Theatre: Here There Be Monsters