Posted in: Disc Reviews by Gino Sassani on October 2nd, 2013 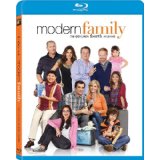 I have become somewhat frustrated over the television comedy genre for a lot of years. It seems that they all take the same path no matter what the show’s actual concept might be. It’s usually the same jokes, just in a different environment. I don’t have children, but I expect that it must be near impossible to sit down and watch a comedy with your family any more. If I were a stranger visiting this planet for the first time, I would quickly come to the conclusion that sex is about the only thing that’s funny here. Thank God that once in a while something fresh comes along and swims against the current tide of innuendo and toilet humor. Modern Family is the kind of show you can enjoy with the entire family. And guess what? It’s pretty darn funny on top of it all.

Jay (O’Neill) is the patriarch of his extended family. He’s a pretty wealthy businessman who lives in relative comfort. He’s recently divorced, but has now married a Columbian woman who is much younger than he is. Gloria (Vergara) also brings her 10-year-old son Manny (Rodriquez) to the Pritchard home. Jay has two children. Mitchell (Ferguson) is gay and living with his partner Cameron (Stonestreet). The two have adopted a Vietnamese infant daughter named Lily. Mitchell is an attorney who supports his family, while Cameron is the jolly stay-at-home dad. Jay’s daughter Claire (Bowen) has a more traditional family. Husband Phil (Burrell) sees himself as a cooler, hip kind of dad, which usually leads to some embarrassing situations for him and his family. They have three kids. Luke (Gould) is the only boy and more clueless than his father. He’s obviously not playing with a full deck. It’s ironic, because actor Nolan Gould is a Mensa member and somewhat of a child genius. Now that’s acting. Daughter Alex (Winter) is the smart one in the family and finds herself the most embarrassed by everyone else. Daughter Haley (Hyland) is the teen who is discovering boys but is not so bright either.

The show has a great variety of characters and acting styles. It provides a wealth of places and situations that the series can move around in. There isn’t near as much of the repetition that too many comedies find themselves trapped within. The situations are almost all new and fresh each week. The chemistry is excellent. There isn’t a weak link in the cast. Julie Bowen in particular has such incredible expressions, it’s funny just to watch her react. The show never goes for the obvious joke or works too hard to set the humor up. The writers are smart enough here to just set up the situations and let the laughs come to them. The result is that the characters never feel like they’re reaching too hard for a laugh. It all comes so naturally. This is the best new situation comedy I’ve seen in years. Check it out and see what it’s like to laugh without checking yourself and your company for appropriateness. Who says you can’t be funny for all ages? The cast and crew of Modern Family don’t believe any of that crap. Just one episode and you won’t either.

The fourth season will go down as a big one for Modern Family. Jay and Gloria have a baby about half-way through the season. It provides an entirely new dynamic to play between the two. The chemistry is better than ever, and the arrival of the baby sets things up even more for next season. Haley attempts to go off to college, which provides some warm and fuzzy moments. But I’m sure I’m not giving out any spoilers when I tell you that’s not going to work out so well. Just how it all ends makes for some interesting comedy. Lily continues to grow and provides some of the funniest material for the year. The kid has the most charming delivery; it’s hard to imagine someone that young with such a sarcastic wit.

There are some specific episodes that provide the highlights of this collection. The Halloween episode has always been one of my favorite of each season. This time the neighborhood has requested the Dunphy family tone it down. OK, it was more a demand in the form of a petition, and by tone it down they meant stop. So Claire decides to go as an innocent Bo Peep while Phil’s trying to sell a house that has him spooked. It doesn’t help that he makes a comment to Claire that she’s not really all that scary. Yeah, that’s not going to end well.

New Year’s Eve has Jay deciding to take the entire clan to the hotel he visited back in the 70’s. The place had it all, and he wants to relive those memories. Of course, the place isn’t what it used to be. It looks like a bad time as the family each sneak away for their own good time. Jay ends up playing poker with Billy Dee Williams.

Claire, Phil, Cam and Mitchell disagree on whether or not to buy a cheap house, fix it up and flip it. There’s a bit of tension from the start as the story spreads through a few episodes. Finally they scam Phil’s nemesis in the real estate business Gil Thorpe, played hilariously by Rob Riggle. More on that later.

I have now watched my favorite scene ever on the series. Luke and Phil have been having trouble with a few people in the neighborhood. Phil wants to kill them with kindness, but it doesn’t work out so well. He decides to get his revenge during Jay and Gloria’s son’s baptism. Luke stays home “sick”, but as the ceremony winds down he gets his revenge in a Godfather finale that almost matches that famous scene shot for shot. The scene has been imitated before, but never this well.

The season ends with a trip to Florida because Phil’s mother has died. Don’t expect a somber season finale here. Whenever you get Fred Willard in the action, you better strap yourself in for some laughs. On top of that, Phil’s mother leaves a letter with a rather unusual final request for Phil to perform.

You just can’t be disappointed, and Modern Family gets my vote for the very best comedy on television today.

Each episode is presented in its original aspect ratio of 1.78:1. The 1080p image is arrived at with an AVC/MPEG-4 codec. The show certainly looks good. The show is rather bright as comedies tend to be. It all pops in a way that FX has really demonstrated time and again in their shows.

The DTS-HD Master Audio 5.1 isn’t going to be very much of a stretch here. It’s a dialog show. There aren’t any fancy things going on here. There shouldn’t be.

Deleted Scenes: Each disc has a collection of deleted and extended scenes.

An Addition To The Family: (6:30) Cast and crew talk about the arrival of the baby and how it affects the family dynamic.

A Day With Eric: (11:57) Camera follows actor Eric Stonestreet through a typical day filming the show. We catch his arrival on the lot until the last shot of the day.

A Modern Guide To Parenting: (4:40) Through show clips we get some gems about raising kids from the characters.

Modern Family Writers: (13:14) The writers talk about how they get stories from the stuff that really happens in their lives.

If you like the show, there’s reason to be even happier. The talk is that a year from now will see a spinoff of the Riggle character. He was only in a few episodes and almost got Claire to work for him. That didn’t work out, but apparently the character did. Inside chatter tells me he’ll be getting his own show next year. They’ll be happening in the same universe, and I expect we’ll see the rivalry with Phil spill over into both shows. Expect to see even more of him on Modern Family this year as the network sets up the separate show. Looks like we’ve been “Thorpedoed”.

Gino Sassani is a member of the Southeastern Film Critic's Association (SEFCA). He is a film and television critic based in Tampa, Florida. He's also the Senior Editor here at Upcomingdiscs. Gino started reviewing films in the early 1990's as a segment of his local television show Focus. He's an award-winning recording artist for Omega Records. Gino is currently working on his 8th album Merchants & Mercenaries. Gino took over Upcomingdiscs Dec 1, 2008. He works out of a home theater he calls The Reel World. Favorite films: The Godfather, The Godfather Part II, The Body Snatcher (Val Lewton film with Karloff and Lugosi, not the pod people film), Unforgiven, Gladiator, The Lion King, Jaws, Son Of Frankenstein, The Good, The Bad And The Ugly, and Monsters, Inc.
“31 Nights Of Terror” Halloween (35th Anniversary Edition) (Blu-ray) Family Guy: Volume Eleven