Posted in: No Huddle by Jeremy Butler on October 3rd, 2013 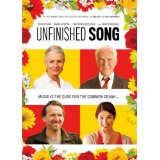 “What makes a song beautiful is not always the quality of the voice but the distance that voice has had to travel.”

Well said, Mrs. Redgrave, well said. I should broach this subject early; I am not a fan of musicals or musically-themed films. That said, Unfinished Song is much more than a musical; it is a tale of an emotionally crippled man who has only formed one meaningful connection and about what you do when you lose that connection: do you lie down and die, or do you find a median to that will allow you to form new connections? As stated above, it is about distance rather than quality; however, in my opinion Unfinished Song accomplishes both.

Arthur (Terrence Stamp, The Adjustment Bureau) is not a pleasant man; actually he’s a bit of a crank; he’s rude, candid, obnoxious to his family as well as his son James (Christopher Eccleston, Heroes), who Arthur often regards with annoyance or disappointment. Simply put, most people who meet him grow to instantly dislike him. However there is one person on earth who Arthur has a soft spot for and seems that get through his defenses: his beloved wife, Marion (Vanessa Redgrave, The Butler). With Marion, Arthur is quite sweet, treasuring every moment with her, especially after the two learn that those moments are running back; Marion’s cancer has returned, and it is more aggressive this time. After being given the grim prognosis, the two try to settle into a quiet routine and enjoy the time they have left.

However, there is one activity that the two cannot agree on. Marion is part of a local choir with other retirees and led by music teacher Elizabeth (Gemma Arterton, Hansel and Gretel: Witch Hunters). Being part of the group means the world to Marion; for Arthur, on the other hand, it is a pointless activity that puts a strain on Marion’s health and takes time away from the two of them. Despite his objections, Arthur escorts her to rehearsal everyday (waiting outside of the building rather than going inside to be part of the group). The group is preparing for Shadow Song, an upcoming choir competition. Sadly before the competition, Marion’s condition worsens and she is unable to compete. In lieu of her participation, Arthur must step in and fill the void left by his wife: can this contemptible old man shed his solitary habits and join the pack, and perhaps find something to help him cope with his personal tragedy?

“You know how I feel about enjoying things.”

Well, Arthur may have trouble enjoying things, but I have no trouble enjoying them, especially this movie which I found very touching and to be a real treasure. The film establishes itself very early on; granted the premise is a bit basic and the subject matter is predictable, but despite that it did not take anything away from the quality of the movie, and I remained engrossed. True, unraveling how the film would end was not a struggle; the ride was the best part; I may have known where the film would end up, but I had no way of deducing the route the film would take to get there. Unfinished Song expertly maintains the balance of comedy and drama, making me laugh with the offhand comments from Stamp’s character as well as filling me with sadness for the characters (two in particular) for the heart-wrenching circumstance they find themselves in.

No small part for the quality of this film can be attributed to lead Terrence Stamp. The cast as a whole was great, but Stamp’s casting without a doubt was perfect. His portrayal and the ease with which he delivered his lines was so authentic that it makes me wonder was he really acting or simply being himself (I’ll have to do some research later to find out). Another selling point: the dynamic he shared with each character gave real insight into the character and showed his range; with his wife, he showed vulnerability from the beginning, but with the other characters there was a buildup to it, making the character’s evolution one of the best I’ve seen in some time.

In my opinion, Unfinished Song deserved a wider release. It is not one-of-a-kind, and yes, there are many more like it out already with more to follow I’m sure, but its quality is unmatched. It got me to lower my raised defense by getting me to look past its musical aspect to the deeper story, not to mention that the songs sung were far from conventional.

Jeremy Butler is a film school graduate of the International Academy of Design and Technology. He is been writing for Upcomingdiscs since 2012; however, movies have played a big part of his life for much longer. Favorite genres include horror, science fiction/fantasy, and comedy. Favorite movies are V for Vendetta, Boondocks Saints, Kiss Kiss Bang Bang, and The Godfather.
Bryan Ferry: Live in Lyon (Blu-ray) The Little Mermaid: Diamond Edition (Blu-ray)