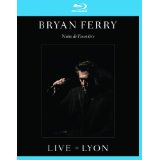 For a variety of reasons, fewer people seem to be retiring when they turn 65. That’s long been the case for legendary musicians like Bryan Ferry, who was at that milestone age when he filmed this concert in Lyon, France during the summer of 2011. Ferry has always combined his own “old soul” sensibility with a forward-thinking approach to creating music. So this show, with Ferry now an actual senior citizen, turned out to be an ideal time to check in on the former Roxy Music frontman.

Live in Lyon was part of a tour supporting Ferry’s 2010 “Olympia” album, and features music from the singer’s staggering 40-year career. As a result, the show highlights Roxy Music hits from the ‘70s and early ‘80s, as well as a generous helping of cuts from Ferry’s accomplished solo career, which also includes his haunting covers of other artists. (The album that preceded “Olympia” was a 2007 collection of Bob Dylan covers called “Dylanesque.”)

Unlike a lot of artists who ditch their original bands to go solo, Ferry’s individual success during the ‘70s happened alongside the peak of Roxy Music. The parallel nature of Ferry’s solo and Roxy Music output makes many of the tracks indistinguishable from one another, especially if — like me — you’re not intimately familiar with his discography. It’s probably why I gravitated toward more outwardly dynamic offerings like “Reason or Rhyme” (from the “Olympia” album) and “My Only Love.” I was also consistently intrigued by his inevitably haunting takes on well-known songs (like “I Put a Spell On You” and “Make You Feel My Love”), even when it was an awkward fit (like his version of Stax classic “Hold On, I’m Coming”).

What every Ferry fan will notice is that the singer’s advanced age has made his unique, ethereal voice noticeably more weathered than it was during his heyday. Some people will interpret this as a sign that Ferry is losing it, but I think it adds an appealing amount of character and grit to his music. (Which serves him particularly well during the rocking trio of “What Goes On”, “Sing of the Times”, and “Love is the Drug.”)

So while the music is solid and eclectic — the setlist also includes solo hits like “Slave to Love” and “Let’s Stick Together” — the concert itself is a bit of a mixed bag. For example, Ferry has employed two talented but thoroughly unnecessary female dancers who are wildly distracting every time they’re on stage. Ironically, they disappear after “Don’t Stop the Dance” before returning for “You Can Dance.” (Make up your mind, Ferry!) The show is more effective when it’s focused on the music, which is equally at home showcasing woodwinds and the electronic-based work of early Roxy Music collaborator Brian Eno. Ferry also takes an occasional turn behind the keyboards, and “Oh Yeah!” serves as a terrific showcase for the instrumentalists. (Especially saxophone/clarinet player Jorja Chalmers.)

I do wish this concert film had highlighted the breathtaking outdoor venue more than it did. Live in Lyon took place in an ancient Roman theater, and the crowd was so enthralled with the 99-minute show they hardly seemed to notice (or care) that it rained on them for a significant portion of the concert.

5. If There is Something

6. Make You Feel My Love

19. All Along the Watchtower

Bryan Ferry: Live in Lyon is presented in an aspect ratio of 1.78:1. The 1080i image is arrived at with an AVC MPEG-4 codec at an average of 30 mpbs. After a close-up of a flickering light bulb, the show opens with a mildly purple haze. The rest of the concert alternates between blue and reddish hues thanks to the stage lights. Colors come across quite well and black levels are solid throughout. On the other hand, the predominant medium shots are a bit soft — perhaps due to the aggressive stage light colors — and not as sharply detailed as I’ve seen from other Eagle Rock titles. To be fair, Live in Lyon is more visually dynamic than your average concert film — close-ups of the Jumbotron give us a better look at the artistic images that accompany the music — and the Blu-ray does a fine job of bringing the show to life.

The DTS-HD Master Audio 5.1 track is most noteworthy for presenting Ferry’s unique vocals — which, at times, can come off wispy — in a surprisingly intelligible way. The rest of the track is highlighted once again by a spot-on bottom end (these Eagle Rock Blu-rays tend to nail the bass) and an immersive sound field that envelops the viewer, even if it isn’t quite as hyper-dynamic as some other titles. You also have the option of listening to the show in LPCM stereo, which is the default track on this disc. Make sure to switch over to the DTS-HD 5.1 track.

The Making of Olympia: (45:49) An in-depth, behind the scenes look at the making of the “Olympia” album, which was inspired by Manet’s painting of the same name. (Olympia is also the name of the place in London where they recorded it.) With this album, Ferry returned to writing the majority of the material he’d be singing. He also recruited a mixture of young blood (including his drummer son, Tara) and more seasoned talent (like Primal Scream bass guitarist Mani). We learn the story behind each of the album’s tracks and we follow their evolution.

Overall, this is an enlightening look at the process of creating an album, and (more specifically) a revealing exploration of Ferry’s meticulous songwriting method. A must-see for fans.

Also included is a 39-page booklet, which includes a summary of Ferry’s career by English writer Michael Bracewell and bios of the “Olympia” tour musicians. This impressive Blu-ray is a fitting, career-spanning encapsulation of an artist whose music has always been a combination of the past and present.