Posted in: The Reel World by Jeremy Butler on October 4th, 2013 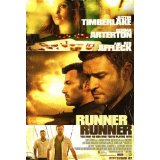 “This is your job. You want a safer job, go work at the post office. You want a clear conscience, go start a charity. But if you want your own island and your boss says you gotta go out there and take a beating, you go out there, take it and come back to work and say, ‘do you need me to do it again?'”

This may just be me, but any job that requires me to happily take a beating simply isn’t for me, and no matter how much money is on the line. A movie about a bright kid from a broken family, down on his luck getting taken in by a charismatic wheeling-dealing/sociopathic businessman, and before long finding himself in over his head, sound familiar? I’m sure it does, but what I have come to learn in recent years is just because it has been done does not mean that it still can’t be entertaining.

Harvard student Richie Furst (Justin Timberlake, Trouble with the Curve) is a gifted young man trying to earn a master’s degree in finance and hopes to transform his degree into a job on Wall Street. Though he is on the right track to achieving his goal, his chances of accomplishing it are dwindling due to the fact that he can’t afford to pay his tuition. The son of a degenerate gambler, he has no family support, and the job he had that allowed to pay his tuition, the company went bust. Seeing no other option, Richie risks all of his life savings in online poker and before long he finds himself penniless. Sensing something was not right, he discovers that he has been cheated and travels to Costa Rica to confront Ivan Block (Ben Affleck, ARGO), the man who runs the online gambling site.

Impressed with Richie, Ivan not only gives Richie his money back, he offers him a job. Seduced by the lifestyle not to mention Block’s business associate Rebecca (Gemma Arterton, Hansel & Gretel: Witch Hunters), Richie quickly agrees and in no time at all is living the life he always dreamed of. His dream quickly disappears and turns into nightmare as the glamor begins to fade and he begins to see the ugly side of Block’s business and a quick visit from a F.B.I. Agent (Anthony Mackie, Pain & Gain) looking to strong arm him into flipping on Block. In way over his head and running out of time, Richie must find a way to dig his way out of the hole he has gotten himself in before he either winds up in a foreign prison or fed to crocodiles.

I came into film with low expectations and left pretty impressed, honestly. I really dug the film, granted I realized that the premise has a laundry list of films that very similar, but that did not darken my opinion in the slightest. The film has a lot of things working for it: an excellent cast, an interesting story, and possibly most surprising aspect was the humor. True, the film is not going to win any awards for originality, but it does manage to entertain; it paints the picture of the lifestyle that everyone wants to live and the powerful temptation to do whatever it takes to acquire that life.

The cast was top-shelf, but I guess that is to be expected given they are all experienced and talented professionals (yes, even Timberlake). Timberlake (the least experienced of the core four) is completely believable as the impressionable young man who just gets swept up in the fantasy and finds that the lines quickly blur. Affleck’s rendition as the devious, cold and calculating Ivan Block was extremely enjoyable. However, my favorite member of the cast without question was Mackie as the wisecracking F.B.I. Agent Shavers; he had some of the best lines of the film and delivered them with precision. In the romance department, I found the pairing of Timberlake and Arterton to be cliché; however, I blame the way the characters were written, and despite this there was definite chemistry between the two during their sensual stare-downs.

Runner Runner is not the type of movie you go see again and again, and it’s not the type of movie that you will be talking about for weeks to come, but it is undeniable that you will enjoy watching Affleck play the bad guy with the aid of crocodiles. At the very least you will enjoy seeing the beautiful scenery and cinematography, watching how the other half live and desiring to live that life.

Jeremy Butler is a film school graduate of the International Academy of Design and Technology. He is been writing for Upcomingdiscs since 2012; however, movies have played a big part of his life for much longer. Favorite genres include horror, science fiction/fantasy, and comedy. Favorite movies are V for Vendetta, Boondocks Saints, Kiss Kiss Bang Bang, and The Godfather.
“31 Nights Of Terror” House of Wax (Blu-ray 3D) “31 Nights Of Terror” Adam Chaplin: Violent Avenger