Posted in: No Huddle by Brent Lorentson on October 5th, 2013 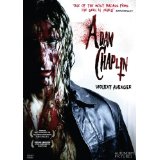 Have you ever watched a movie that is so insane that when it ends you’re stuck on your couch wondering what just happened?  Adam Chaplin: Violent Avenger did just that, and as it turns out, that is not such a bad thing.  The film is such a mash-up of crazy visuals and violence, it’ll leave your mind rattled for some time just trying to make sense of it all.  This is pure splatter cinema straight out of Italy where the gore runs red and by the buckets.

Adam (Emanuele De Santi, who also wrote and directed the film) is a man that is out for revenge after he finds out his wife has been burned alive by a local crime boss Denny Richards.  The police are no use considering Denny controls the city, and this leaves Adam with only one option, to make a deal with a demon that gives him special powers and will help him as best he can to achieve his revenge.  Sure, the plot is simple, and the film doesn’t try to pretend it is anything more.

Where the film embraces its originality is the execution of the story.  The demon doesn’t just walk around with Adam; instead he hides inside him, and when his presence is needed he rips through a gash in his back to do his dirty work.  When the little demon is summoned, Adam goes into a trance-like state where his eyes turn milky white, and once this occurs, well, it’s best you stay out of the way.

The film starts off with a guy who steals from Adam on the subway.  The guy makes his escape and feels he is safe taking shelter in the sewers.  But Adam still finds him.  After Adam tries to get information out of the thief about Denny and comes up empty, Adam ends up pulverizing the man and literally beats him to a pulp.  Instead of a slow painful beat-down, Adam unleashes a fury of punches that are delivered at a speed that would even have Superman and The Flash feel snail-like by comparison, and we get many of these cartoon-esque fights throughout.

The police are more than a little nervous, so they blackmail a notorious criminal, Michael Carrera, to kill the Avenger.  Mike has his talents as well, and he enjoys going around killing people at will and does so with this black and white face makeup that has him looking like a mash-up between WWF wrestler The Ultimate Warrior and The Crow.

As for Denny, he’s something of crime boss who dabbles in science.  He’s been horribly disfigured since a brutal dog attack from his childhood that has left him so mangled he constantly wears a mask everywhere he goes.  To help him heal and gain strength he uses this medicine called Neurocil 3 that pretty much helps keep the dead alive.  As his men are piling up he’s only getting more frustrated with Adam, who seems to be dismantling his organization, and when the final showdown occurs, it’s just as bloody and gory as you would expect.

Really, the film is hard to follow and make sense of at times, but that’s fine; this wasn’t a film made to win awards, it was made to shock the senses and just be a crazy good time.  For those who are fans of Electric Dragon 80.000 V or Rickey O, this should be right up your alley.  My one serious complaint, though, are the amount of shots that shoot between a character’s legs; if someone made a drinking game involving every time that shot occurs in the film I foresee alcohol poisoning occurring before the film even finishes.

If you like campy gore filled with buckets of blood and insane violence, then this is your film.  Though the film is not for everyone, this is a film worth giving a shot on Netflix when you’re up late at night with a few drinks and just want to have your mind blown by some ridiculous violence and nothing more.

Brent Lorentson is a horror writer and film critic based out of Tampa, Florida. With a BA in Digital Film, he co-wrote and co-directed Scavenger Hunt. His short stories have appeared in various horror anthologies. In 2019 his short script Fertile Blood will be a part of the anthology horror film Slumber Party. He is currently working on his first novel A Dark and Secret Place set to be released in late 2019. Favorite Films: Taxi Driver, Fight Club, I Saw the Devil, The Wild Bunch, Dawn of the Dead, A Clockwork Orange, Pulp Fiction, Heathers, The Monster Squad, and High Fidelity.
Runner Runner Gravity