Posted in: No Huddle by Archive Authors on October 8th, 2013 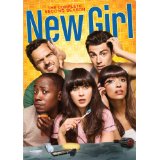 It’s funny. It’s a funny show. That’s kind of a big thing for a sitcom. It’s good at comedy. You wouldn’t think that would need to be said, but it does. I’ve seen many sitcoms which were like death. They were boring, uncomfortable and unfunny. I’ve seen many sitcoms that are a joyless exercise executed by unfunny people who have no clue on how to make a funny show. It actually isn’t the easiest thing in the world to do unless you have the knack for it. You kind of have to be able to loosen up and kind of go for it. You kind of have to get real and go crazy. New Girl is that kind of show.

New Girl is like a Seinfeld/Friends kind of show. It has no problem going all out for the comedy while examining the chemistry of a small insular group of people. The situation here (the sit in sitcom) is three men and a girl living in a loft. Now we are in the second season, so we can dispense with the formalities and mechanics of how the new girl functions with three crazy guys. It helps if she’s crazy too, as in this case. That’s the great thing about this show. It goes full-tilt crazy. It puts no limits on the wackiness, but then it also has a nice tight format in which we can really get to know our four leads in their awesome craziness. The star of our show is Zooey Deshcanel, for whom the word adorkable was coined. Adorkable is not a word, but it might be someday, and that will be entirely attributable to special charms of Zooey. She might not be everybody’s cup of tea, but she is most people’s cup of tea, because she has dorky, adorable charm. With Zooey at the center, it seems everyone else in the cast try to find their own adorkability (again, not a word). The writers and producers of this show actually do commentary in which they talk about the frequent improvs.

There are numerous extras that explore the actors of the show fully engaged in maximizing the chemistry and fun. Chemistry is extremely important to the show and developing a nice balance, interaction and cooperation between the roommates. Each actor seems completely involved and committed to anything and everything. You have to have no shame in comedy, and everyone here has no shame. This also seems to apply to a fun group of guest stars like Rob Reiner, Jamie Lee Curtis, Denis Farina, Brooklyn Decker, Etc. The two big standout regulars, besides the aforementioned Zooey as Jesse, are Jake Johnson as the semi-normal Nick and Max Greenfield as the super-douche Schmidt. Schmidt is the big scene-stealer in a cast full of scene-stealers as a very heterosexual metro-sexual who often acts like a homosexual even though he is not at all gay. There is a very Seinfeld/Friends vibe, as I said before, where all the characters get to explore situations that are widely diverse and entertaining while always remaining true to the realness of the characters as they develop.

Elizabeth Meriweather is the creator of the show and probably embodies its spirit, but a notable part of the production team is film and TV writer/director Jake (Freaks and Geeks, Bad Teacher) Kasdan who brought big screen sensibilities to the show’s overall design. It is a one-camera show that is not filmed in front of an audience which allows the loose free-wheeling improvisation and editing to easily become part of the weekly development of each episode. It also allows a certain degree of experimentation in lighting and location. In other words, the show is allowed to be free. It is confident in its own instincts and its own quirky sense of humor. Many sitcoms are filmed in front of an audience and therefore are very rehearsed and regimented. They really have no choice, but it inhibits and rarely allows improvisational inspiration. It is clear that New Girl is a show that revels in the actors’ complete involvement and contributions to every stage of the creative process. The actors are clearly having fun and becoming like family. It is obvious that the biggest goal of the show is the show that they all accept and love each other for their quirky, adorable dorkiness. Take my word, adorkable will eventually wind up in the dictionary.