Shout at the Devil (Blu-ray) 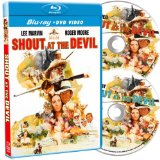 “This story is based on a remarkable but true incident that took place in Africa in 1913 before the Great War, when the world was very different.”

The moviemaking business was also drastically different in 1976, the year this British, pre-WWI romp was released. Today, the risk-averse film industry has made large-scale adventures like Shout at the Devil — starring big personalities trekking across even bigger locations — all but extinct. I get that greenscreens and CGI are more cost-effective. But a movie’s ability to transport its audience gets an extra jolt when we know we’re looking at the real thing.

Shout at the Devil stars Lee Marvin and Roger Moore as the sensationally-named Col. Flynn O’Flynn and Sebastian Oldsmith. Flynn (Marvin) is a notorious ivory poacher looking for a big score in the German-controlled portion of East Africa. He swindles naïve Brit Sebastian (Moore) into coming along for the ride. (This will become a recurring theme.) The duo is pursued by local German commander Herman Fleischer (Reinhard Kolldehoff), a grotesque bully who had previously almost hanged Flynn’s silent sidekick Mohammed (Ian Holm). Meanwhile, Sebastian meets and falls in love with Flynn’s daughter Rosa (Barbara Parkins). Flynn and “Bassie” squabble and embark on a series of adventures until a devastating personal loss unites them for a final mission to take out Fleischer.

The quote at the top of this review appears at the beginning of the film. It is immediately followed by a disclaimer assuring audiences that no animals were harmed in the making of this movie. I’m glad that disclaimer is there, because the elephant hunting scenes — using a combination of clever editing and stock footage — are pretty awe-inspiring. (And I’d still love to know how they got those elephants to fall down on their own.) Shout at the Devil was filmed in Malta and South Africa, which results in some truly breathtaking location shots. It also resulted in some controversy, given that filming in South Africa occurred during the apartheid regime. (Oddly enough, Moore made two other movies — Gold and The Wild Geese — in South Africa during apartheid.)

The result is a stylish action-adventure spectacle in the vein of The Man Who Would be King or David Lean’s best films. Marvin is his larger-than-life self as the hard-drinking Flynn. The performance is a lighthearted tweak on the actor’s hell-raising persona. (Don’t believe me? Apparently, he routinely arrived on set hungover and started a fistfight with Moore.) Speaking of Moore, the actor had already made two James Bond movies — 1973’s Live and Let Die and 1974’s The Man with the Golden Gun — by the time he played Sebastian. Although Moore is generally considered the goofiest Bond, I still enjoyed his willingness to play up Sebastian’s buffoonery. The actor also shows off his suave side when Sebastian romances Rosa.

Parkins is feisty as Rosa, but doesn’t get to do anything interesting until the film’s final act. Holm — the future Bilbo Baggins — gives you a hint of his talent by stealing scenes without saying a word. (Mohammed is always ready to hand Flynn a bottle of gin.) Meanwhile, Kolldehoff impressively commits to making the cartoonish Fleischer a seriously hateable bad guy. Unfortunately, the Fleischer character isn’t the only tonal incongruity in this film. Shout at the Devil is based on author Wilbur Smith’s book of the same name, which is itself loosely based on true events. As a result, director Peter Hunt — who made one of the Bond movies (On Her Majesty’s Secret Service) that didn’t star Moore — and his screenwriters could take the story in a number of different directions. I just wish they hadn’t decided to go in all of them.

The film has an overwhelmingly lighthearted tone that is occasionally (and jarringly) broken up by some brutal sequences, including the hanging of some African natives and the pivotal death that leads into the more serious final third of the movie. That aimlessness and inconsistency extends to the running time. At various stages, there have been 164-minute, 150-minute, 137-minute, and 115-minute versions of this film. I can certainly see why: although I enjoyed the comically extended (fictional) fistfight between Flynn and Sebastian, a significant part of Shout at the Devil plays out in redundant episodes. (Flynn tricks Sebastian into doing his dirty work…again!) The result is a highly-entertaining (and highly uneven) epic that is always fun to watch, even if what you’re watching doesn’t always feel essential.

Shout at the Devil is presented in an aspect ratio of 2.35:1. The 1080p image is arrived at with an AVC MPEG-4 codec at an average of 20 mbps. The movie was filmed in Technicolor, so it’s no surprise to see such a bright, vibrant image. I was pleasantly surprised, however, by the remarkable clarity in most closeups and medium shots; the only hiccup is some periodic softness during several wide shots. (This does not include the intentional softness used for Rosa’s “dream girl” introduction during Sebastian’s fever dream.)

The print is free of scratches; only the negligible presence of tiny, persistent white blemishes betray the movie’s age. I actually expected a somewhat grainier presentation, yet this doesn’t appear to be an instance of DNR use and abuse.

The DTS-HD Master Audio 2.0 Mono track is surprisingly robust and dynamic. I expected the track to shine during the film’s gunfights and other action sequences. But the limited mono track also does an admiral job conveying the aural pleasures of the movie’s exotic locations. (Those pleasures are enhanced thanks to a rousing score by Maurice Jarre.) The track is also free of popping/hissing, and the dialogue comes through clear as a bell.

I’m more disappointed than usual at the lack of any real bonus material. I can understand why Moore might not necessarily want to talk about getting into a fistfight with Marvin. But are you really telling me they couldn’t have at least roped a historian into doing a commentary track that separates historical fact from fiction.

Though this was my first time watching Shout at the Devil, I feel confident saying the film has never looked better on home video. (Who better to handle this release than Shout! Factory?) The consistently amusing movie has its ups and downs, but it works best as a reminder of the sort of adventure film they don’t make anymore.