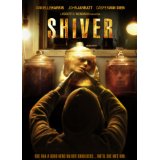 “He apparently had a rough childhood.”

Isn’t that always the excuse? Well, in this film it seems like everyone had a rough childhood, everyone from the killer to his would-be victim to the cop chasing him. Based on the Brian Harper novel of the same name, Shiver is horror film with some intrigue. From the moment that I picked the film up and took a look at the cover, the film had my attention, and it didn’t disappoint; the end was bit much and a little generic, but overall the film lived up to its hype.

Women are locking their doors and sleeping with a knife under their pillow. Why? Because The Gryphon (John Jarratt, Wolf Creek) is on the loose, a serial killer who targets beautiful women, breaks into their homes, kills them with a garrote, and takes their heads for his trophy. Methodical and prolific with four kills under his belt, this killer relishes his work just as much as he enjoys taunting the police with recordings of his victim’s final moments. With a city in a panic, Detective Delgado (Casper Van Dien, Starship Troopers) is under tremendous pressure to find this psychopath and bring him to justice; however, to date this killer has always managed to stay one step of ahead of him and the police, leaving them with no leads to follow and not one single piece of evidence that can be traced back to him, until Wendy Alden (Danielle Harris, Hatchet III), that is.

A shy, timid young woman struggling to make ends meet, she was intended to be the Gryphon’s fifth victim, but she fights back and manages to escape. Wendy is the first and only person to ever escape his grasp, which ultimately means two things: that she is the police’s best chance of identifying and capturing the elusive killer and that she is the biggest obstacle for the killer to overcome now that she is in police custody. Despite being under police protection, The Gryphon manages to get Wendy all alone again (isn’t that always the case); however, when she manages to elude him a second time, she takes on new meaning for the killer as he becomes to believe that she can give him something that his other victims and the police have fail to present him with: a worthy adversary. With the police proving inadequate in protecting her against a murderer who comes and goes as he pleases, this timid young woman who was afraid to ask her boss for a raise will have to dig deep within herself and find that primal and insatiable will to survive if she is to put an end to The Gryphon’s rampage.

“She had a good head on her shoulders…until she met him.”

Now that is a great tagline; it certainly got my attention. Shiver defied my expectations; I expected a B horror film loaded with every cliché known to the horror genre, and granting that the film does not break new ground in this respect, it still managed to entertain and to keep my interest. Surprising was discovering that the film was based off a novel of the same name; I’ll have to acquire the book to run a comparison between the novel and the movie, but based on reviews of the book that I have seen, readers found the book to be a lot of fun. Coincidently that is also my opinion of the film, it had great pacing; something was always happening, so I never had a chance to grow bored with the plot. It is not a very serious movie; it doesn’t waste time drawing us into the twisted mind of the killer, feeding a lot of useless background information on the character. The film stays focused on the present, which turned out to be a strength rather than a weakness.

My favorite aspect of the film was the characters. It has always been my opinion that characters are the most significant factor in a film’s success, and in the case of Shiver, it has some interesting ones. One thing I enjoyed was the fact that each of the three main characters suffered from some type of childhood trauma; though the subject of each of their traumas is only referred to once and briefly, it was enough to get the gist and provide an understanding of each of these characters. More important than the characters were the portrayals of the actors playing the characters, specifically John Jarratt and Danielle Harris. Jarratt gave a unique performance as The Gryphon; he convincingly played up the character’s desire to be viewed as powerful in order to make up for being powerless and bullied as a kid. As for scream queen Danielle Harris, let’s just say that her performance here redeemed her performance in a Blu-ray that I reviewed not too long ago.

Jeremy Butler is a film school graduate of the International Academy of Design and Technology. He is been writing for Upcomingdiscs since 2012; however, movies have played a big part of his life for much longer. Favorite genres include horror, science fiction/fantasy, and comedy. Favorite movies are V for Vendetta, Boondocks Saints, Kiss Kiss Bang Bang, and The Godfather.
Teenage Mutant Ninja Turtles – Ultimate Showdown On the Riviera (Blu-ray)