Posted in: Disc Reviews by William O'Donnell on October 9th, 2013 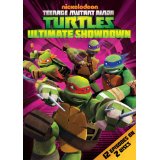 This is the third stab at making an animated series about these radical reptiles. This particular DVD set is the latter half of this show’s first season. We are privy to a wide array of toys…er, I mean, characters whose stories are firmly established at this point (roughly 13 episodes into a 26 episode season).

16×9 Widescreen. As mentioned before, the visuals look nicely rendered and this DVD offers a nice picture quality.

Dolby Digital 5.1 Surround. Spanish and French Stereo. Every sound is rich, clear and very well mixed together. The music moves through all the speakers, and the dialogue comes through clearly from the front speakers.

Located on both discs.

Animated Comics Books: There is absolutely nothing “animated” about these. A two-part series called “Tales from the Lair” is read by scrolling through the images using your DVD remote. Still a nice, unique feature to have instead of a boring photo gallery.

The Mutation of a Scene: This feature simultaneously shows scenes in three stages of production: the storyboard animatic, the first animation test, and the final product. A great feature for those who have not witnessed these stages before.
There are four chapters to this particular feature.

Trailer for the Video Game: Speaks for itself.

The booklet is also a mini-comic starring the LEGO versions of the Turtles, but really its just a larger-than-normal ad.

As an attempt to bring the Turtles to a new generation of child viewers, this is about as good as one can ask for. Although it really hasn’t been that long since the second series stopped airing, this show (which has been renewed for at least 3 seasons) makes for a nice segway into the upcoming feature film.
I suppose either Nickelodeon is nervous about release a large, complete season edition because a smaller edition costs less for fans, or they are taking advantage of both impulsive and completest fans who will pick up any edition that gets released, therefore a complete edition can arrive after some sales have already tested the market.