Posted in: The Reel World by Brent Lorentson on October 11th, 2013 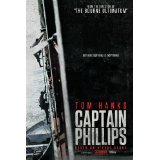 I remember the day I was watching CNN and they broadcast the news of Captain Richard Phillips being rescued after being held captive by Somali pirates back in 2009.  The story of a captain facing gun-toting pirates and being held captive on a lifeboat for four days is a story rich with material that begs to be made into a film.  Now four years later, this heroic story comes to the big screen (in IMAX for those lucky enough to have an IMAX nearby) helmed by director Paul Greengrass (United 93) and starring Tom Hanks in what I believe is the performance of his career.

Very little setup is needed as we meet Captain Phillips (Hanks) as he is on way to take command of the U.S. Maersk Alabama to captain the ship around the horn of Africa and through pirate-infested water.  All crew members know the risk that comes with taking a position on any ship that travels past Somalia, but there is no other route for a crew to take, leaving them with no other choice but to steer through the violent waters as quickly as they can.  Just as we are watching the stern and confident captain plot his route, we are also introduced to Muse (Barkhad Abdi) who leads a crew of his own that has only one intention, and that is to strike pay dirt by seizing a ship on the open sea.

The two men are powerhouses, both in control of their crews, and as the intensity is ramped up between their first confrontation, Greengrass manages to present us with a villain who an audience can easily empathize with.  Muse and his crew are the bad guys and their never made to be the ones for sympathizing with for too long, but even when they are waving their guns and trying to be menacing, we still are given glimpses of their humanity.

Muse is someone we can almost feel sorry for, but we can never quite root for.  His dreams of becoming an American and his delusions of getting away with the hijacking grants us this pitiful look at Muse and his crew where we know he never had a chance to live a happy and innocent life after being born in Somalia.  With the Alabama being Muse and his crew’s potential prize, his desire and greed takes hold and clouds his judgment.

The crew of the Alabama is helpless against the armed pirates.  Phillips does all he can to cooperate with the ship’s invaders, but Muse and his crew want so much more than Phillips is willing/able to give, and thus begins the standoff.

Where Greengrass took a handheld approach with United 93, he does the same again, using the camera to put us in the middle of the action, and manages to deliver a claustrophobic experience in the middle of the Indian Ocean.  In many ways you can look back on United 93 and see it as though it were a warm-up for things to come as the camera weaves through the decks of the Alabama.

The cat-and-mouse game between the pirates and crew is worth the price of admission, and that barely covers half the film.  Knowing the story is true, every crew member is up for grabs as a potential victim.  Things ramp up all the more once Captain Phillips finds himself captive on a lifeboat with three armed men and survival highly unlikely.  Most would have panicked and given in to the pirates, but Phillips refuses to give up, and it is this drive to survive that continues to keep out adrenaline pumping as we wonder how he can possibly escape from this.

As if the altercation between Muse and Phillips were not enough, Greengrass cleverly intercuts the progress of the SEAL team that is prepping for the rescue of the captain.  Every time we cut to the Navy as they organize their rescue mission, hope seems to grow all the more fleeting for Phillips as desperation and preservation of his own survival takes control.

There is a moment in the final act of the film that come awards time I’m sure will be played over and over, where we see Hanks deliver this beautiful performance that reminds us why he has his Academy Awards and allow us to forgive and forget Angels & Demons.  This is a performance that has a range from courageous to humble and allows us to embrace the actions of the real Captain Phillips and call him a hero.

With a percussion-heavy score composed by Henry Jackman, the music drives home the intensity of every scene.    From the moment we see the pirates come into focus through the binoculars up to the final credits, the film is filled with the excitement and thrills you’d expect more from a summer blockbuster. At this point, Captain Phillips is one of the best films of the year and is one of those experiences that as you exit the theater you are reminded why we love the cinema.

Brent Lorentson is a horror writer and film critic based out of Tampa, Florida. With a BA in Digital Film, he co-wrote and co-directed Scavenger Hunt. His short stories have appeared in various horror anthologies. In 2019 his short script Fertile Blood will be a part of the anthology horror film Slumber Party. He is currently working on his first novel A Dark and Secret Place set to be released in late 2019. Favorite Films: Taxi Driver, Fight Club, I Saw the Devil, The Wild Bunch, Dawn of the Dead, A Clockwork Orange, Pulp Fiction, Heathers, The Monster Squad, and High Fidelity.
Contest: Win The Complete First And Second Seasons Of Mama’s Family “31 Nights of Terror” The Colony (Blu-ray)