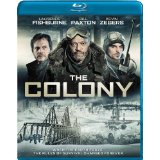 “When people are desperate, they’ll do horrible things to survive.”

Sci-fi and horror have been exploring the dark side of human nature for as long as those genres have been around. Throw a group of people together in a high-stress situation — whether they’re running from The Walking Dead or hiding from whatever is in The Mist — and the base instinct to survive will eventually lead them to commit unspeakable atrocities. The Colony starts off as the sort of movie that explores the monstrous things people do to each other…and then the actual monsters show up.

“After the snow started, the lucky ones found places like this. A place where life could exist underneath the ice…so we hold on, hibernating like the last dark age. But it’s not the cold we need to worry about; it’s each other.”

Sam (Kevin Zegers), the film’s conflicted young narrator, is kind enough to fill us in on what’s happening. Sometime in the not-so-distant future, the entire planet is covered in snow. What’s left of the human race lives underground in bunkers known as “colonies.”  The biggest threat to each colony is the lack of food and the spread of disease. In Colony 7, there’s a leadership clash between the tough, humane Briggs (Laurence Fishburne) and the more militant Mason (Bill Paxton), who coldly executes anyone who even appears to be sick after a flu outbreak killed 20 of their people.

Colony 7 receives a distress call from the nearby Colony 5. Briggs recruits Sam and an untested youngster named Dead Meat Graydon (Atticus Mitchell) to investigate. When they reach their destination, they discover a freaked-out lone survivor who reveals the promise of a thaw in the snow-covered planet. Unfortunately, they also run into a band of brutal, cannibalistic psychopaths known as “Ferals” who eventually threaten the lives of everyone back in Colony 7.

Writer/director Jeff Renfroe (he’s one of four people credited for the screenplay) quickly and efficiently establishes the world of The Colony. Most impressively, this Canadian production achieves a convincingly chilly and claustrophobic atmosphere on a relatively modest $16 million budget. Renfroe uses his greenscreens and sweeping camera shots well enough, but most of the credit goes to the fact that this is the first movie to be filmed at the decommissioned NORAD base in North Bay, Ontario. This is a B-movie through and through, but the cavernous underground sets give the film a nice little boost.

That boost is sorely needed because The Colony doesn’t really have an original bone in its frigid body. You won’t have to look too hard to recognize a piece of Screamers here, or some Pandorum there. The Feral Leader (Dru Viergver) is a dead ringer for Pluto from The Hills Have Eyes, and the darkened, hand-to-hand combat between the humans and the flesh hungry Ferals isn’t too far from the action in The Descent. The good news is I really like all those movies I just mentioned. So while seeing them jumbled together isn’t exactly inspiring, it’s also not the worst thing in the world. And Renfroe does deserve credit for staging some effectively stomach-turning moments with the Ferals, whose nature is (sort of) explained away during a monologue from Briggs.

At this point in his career, Fishburne could perform this sort of authoritative role in his sleep. But, to his credit, the actor seems totally engaged, which encourages the audience to go along for the ride. Paxton makes for a solid maniac and appears to be enjoying himself. (I swear Mason came thisclose to letting out a “Game over, man!” during a pivotal scene.) Zegers mostly acts as a passive exposition machine, but the actor comes alive when Sam taps into his own animalistic side. The actors deserve credit for accomplishing what they did with their characters because it simply doesn’t seem like there was very much on the page. Or, in the case of Sam’s thoroughly unnecessary girlfriend Kai (Charlotte Sullivan), there wasn’t very much on the page or on the screen.

Early on, The Colony hints at a few interesting ideas — the snow is caused by the breakdown of weather modification machines built to battle global warming; also, is Mason the kind of crazy this new world needs? — but ultimately abandons them. The movie seems content to live in its gory, B-movie wheelhouse. And, thanks to its plot holes, logic gaps and pulse-quickening action, I’m perfectly content to watch it that way.

The Colony is presented in an aspect ratio of 2.35:1. The 1080p image is arrived at with an AVC MPEG-4 codec at an average of 24 mbps. The image alternates between the blue-ish/gray tint you’d expect from the wintry setting and the oppressive darkness from the underground colony. The Blu-ray disc is equally impressive in presenting both. The outdoor scenes display a good amount of texture to go along with nicely subdued colors (except for the too-red fake blood) and contrast, while the bunker scenes highlight strong black levels with solid separation and shadow definition. Some banding is evident — particularly during the bunker sequences — but the overall visual presentation offers surprising clarity, especially when you consider that some digital noise wouldn’t have been entirely out of place here. Just like the rest of this production, the look of this film exceeds its somewhat modest means.

The DTS-HD Master Audio 5.1 track is more subtle than I expected. The whooshing wind from the exterior scenes and the steaming pipes inside the colony are ever-present, but they never overwhelm the rest of the track. I wish some of that same restraint had been applied to the score by Jeff Danna. The subs shouldn’t be just as loud for the bombastic music as they are for the well-placed sticks of dynamite that go off during the film. Thankfully, that’s the only real complaint. I was also impressed by the distribution of sound throughout the rears. When the humans are hiding out underground, for example, the rears let you hear the clanking sounds produced by the Ferals in the distance.

Behind the Scenes: (9:50) A pretty run-of-the-mill featurette featuring comments from Renfroe and the three main actors. Fishburne talks about this being his most physical role in years, while Paxton said the script reminded him of Aliens. Renfroe verbalizes the movie’s theme of holding on to one’s humanity in desperate times. We also see some on-the-set footage of the cast working in that massive old NORAD base.

The Colony is a reasonable facsimile of a Hollywood thriller, and the strong A/V presentation on this Blu-ray helps sell the low-budget chills. (I’d like to see what Renfroe can do with a more inspired script.) Ultimately, it’s a fun, unoriginal addition to the “man vs. man vs. monster” canon of horror films.