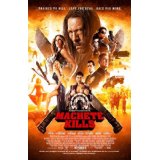 “Try not to be distracted by the cleavage and the hairspray.”

It all started out as a mock trailer written by Robert Rodriquez for the 2007 farce Grindhouse. The project combined such talents as Rodriquez, Quentin Tarantino, Eli Roth, Rob Zombie and Edgar Wright. They were all fans of the 1970’s exploitation grindhouse films. You can certainly see the influences in the movies these filmmakers have made on their own. Machete was equally a farce and only intended to give you that drive-in trailer feeling during Grindhouse. Along the way the segment staring Danny Trejo became something more.

In 2010 Machete became an actual film. It was a low-budget blast of a good time, and you can check out our review of that film here: Machete Review. It was true to the spirit of the mock trailer and a lot more fun than anything in Grindhouse. Trejo at last got to play the lead in a film, and he obviously had a blast. It was long overdue for the actor whose looks often found him playing a heavy in someone else’s film. That film did well enough for Rodriquez and his posse to rethink their whole approach to the Machete image. The result? Machete Kills, and he will at this fall’s box office.

Here’s what you need to know in order to enjoy Machete Kills. You have to leave all of your nitpicking ego at the front door. When the lights go out you have to say to yourself that you’re here to be entertained and nothing more. If you can’t do that, you’re going to have a pretty terrible time. Let’s be honest here. The action in this movie does more than suspend disbelief. It kicks its butt, tears off its limbs, stuffs it into a trash can, sets it on fire and uses a ton of C4 to blow its ashes straight to hell. You have to see this stuff to believe it, and then you won’t believe your eyes.

The President of the United States is played by Charlie Sheen using his actual family name Estevez in the credits. This is not the son of Jeb Bartlett from The West Wing. This is Charlie Sheen playing the crazy Charlie Sheen you’ve been reading about in the tabloid sites. In a plot that mixes exploitation with James Bond, the Prez is in a bit of a pickle. A Mexican madman named Mendez (Bichir) has a nuclear missile ready to launch at Washington D.C. He wants The United States to invade Mexico and clean up the corruption and cartels. Of course, Mendez was once one of those cartel leaders, but he’s now a split personality…with a big bomb. The Prez offers Machete instant American citizenship and a clean record if he gets Mendez. His handler will be beauty contestant Miss San Antonio (Heard). The problem is Mendez has linked the bomb to his own heart. If it stops beating, the missile gets launched, and bye bye Washington. Of course, the real bad guy isn’t Mendez at all. It’s multi-billionaire Voz (Gibson) who wants to screw up the planet and leave in his own shuttle with his hand-picked survivors. Later he’ll return and basically inherit the Earth. That’s unless Machete has anything to say about it. Machete actually doesn’t say too much. He lets his actions speak for him.

The movie moves from one absurd situation to the next. The legend is that Machete can’t be killed, and he sure takes a ton of punishment here. But that’s nothing to the punishment he dishes out. More people get killed in this one movie than the entire Friday The 13th film franchise. It’s slaughter like you’ve only seen in the likes of Kill Bill…only even harder to believe. The action really never stops, and Rodriquez leads you from one dynamic set piece to another. If anything, the movie really looks too good to fit in with the 70’s exploitation films it is spoofing. Machete is Shaft, James Bond and Hans Solo all wrapped up in one ugly Mexican package. The humor is not quite politically correct. If you’re offended by that sort of thing, might I suggest a My Little Pony cartoon marathon?

When a movie is this much fun to watch, it was likely even more fun to make. That kind of experience attracts great actors who just want to play around for a change. There are so many good people in this film that most get little more than an extended cameo. There just isn’t enough time to properly pay off each one.

Jessica Alba returns for a short time and provides the motivation that drives Machete into this madness. I’ve already mentioned Sheen pretty much playing himself. Amber Heard provides more than just the obligatory sizzle. She’s also a key plot point later in the film. Fortunately, Lady Gaga isn’t there for very long, but I’m sure her fans will get a kick out of her unique character. Michelle Rodriquez does what she’s done for years now. She kicks serious butt and does it with style. Look for Modern Family’s Sofia Vergara, who leads a group of assassin hookers. The Shield’s Walton Goggins and Cuba Gooding Jr. fit in with the whole Lady Gaga thing that’s just too bizarre to explain. Think Mission Impossible. On second thought, don’t think at all. Just enjoy yourself. Makeup master Tom Savini has a pretty killer part as a member of Machete’s band for the climax. I love Tom and spent a weekend once bringing him more cake than I’ve ever seen a man eat. (Hey, Tom, I think it’s finally caught up with ya, buddy.) Demien Bichir is the best scene-stealer in the film. It’s a wonderfully quirky performance that doesn’t leave anything behind. Finally, Mel Gibson falls a bit flat as the big bad guy with a Star Wars fetish. He drives around in a car that’s decked out like Luke’s land speeder in the first film. There’s even a lightmachete.

Rodriquez makes sure that the assault doesn’t slow down long enough for you to come to your senses. That’s a pretty wise move when you consider the plot has more holes than the bad guys after a session with Machete. The CG graphics are absolutely horrible, and I suspect/hope that was intended.

Finally, it all borrows a bit too much from Empire Strikes Back including the up-in-the-air ending that leads us to the trailer for Machete Kills Again…In Space. If you’re wondering when/if this franchise has jumped the shark, wonder no longer. That happened back in the mock trailer. You know a film is into overkill when a guy pushes a girl from a chopper thousands of feet in the air but feels the need to shoot her a hundred times as she’s falling. Eventually Rodriquez will go too far and the laughs will stop. I’m worried that’s coming next. For now I’m going to just sit back, strap in and enjoy the crazy ride. It all boils down to just one thing: “Machete Kills, that’s what he does.”

Gino Sassani is a member of the Southeastern Film Critic's Association (SEFCA). He is a film and television critic based in Tampa, Florida. He's also the Senior Editor here at Upcomingdiscs. Gino started reviewing films in the early 1990's as a segment of his local television show Focus. He's an award-winning recording artist for Omega Records. Gino is currently working on his 8th album Merchants & Mercenaries. Gino took over Upcomingdiscs Dec 1, 2008. He works out of a home theater he calls The Reel World. Favorite films: The Godfather, The Godfather Part II, The Body Snatcher (Val Lewton film with Karloff and Lugosi, not the pod people film), Unforgiven, Gladiator, The Lion King, Jaws, Son Of Frankenstein, The Good, The Bad And The Ugly, and Monsters, Inc.
“31 Nights Of Terror” Aaahh!!! Real Monsters: The Complete Series “31 Nights Of Terror” Contest: Win A Horror Triple Feature From Mill Creek