Posted in: No Huddle by Brent Lorentson on October 13th, 2013 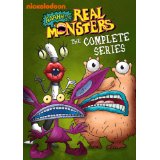 At some point as we’re getting older I think we all get a little nostalgic for the things we liked when we were younger.  For everyone I believe our reasons are different for having this trip to the past, whether it’s playing that old cassette that never seemed to leave our car radio, revisiting old NES games, and most commonly I think it’s the movies and TV shows we looked upon so lovingly in our youth.  Sadly, though, these trips to the past seem to leave us scratching our heads, wondering what we were ever thinking.  And that would about sum up my experience reviewing Shout’s release of the Nickelodeon series Aaahh!!! Real Monsters.

Before there was Monsters Inc. and Monsters University, there was another batch of monsters that did their best to scare the daylights out of us humans.  In this monster-filled world, we follow the adventures of three friends who are in school learning the skills of how to scare humans.  Ickis (Charles Adler) is a bit of the reluctant hero of the group; he wants so desperately to be a great monster who can scare the pants off of anyone, but with his short stature and large bunny-like ears he looks more cuddly than menacing.  Then there is Oblina (Christine Cavanaugh), a black-and-white-striped-candy-cane-looking creature with giant red lips, and Krumm (David Eccles), a short, chubby creature that can never seem to keep hold of his eyes.  Teaching the young students is their headmaster, The Gromble (Gregg Berger), who, like any good monster, is hard to satisfy and loves to scream and scare his young students.

The three young monsters all live together with many other monsters in a secret lair hidden beneath the city dump.  The animators seem to be having a blast creating scary, gross monsters to inhabit the school.  One of the more clever details added to the show is that when the monsters need to travel a great distance or make a quick escape, all that is needed is for them to find the closest toilet and give it a flush.

When first viewing the pilot episode, The Switching Hour, I was a little worried that the show wouldn’t hold up and continue to be a drag.  But like most pilots, this is when everyone involved is just getting started with molding the characters, and the decision to continue most of the following 51 episodes by delivering two mini-episodes combined in one, the stories feel less forced and the humor is more natural.  It’s the Monster Hunter episode where things finally picked up for me where the trio first encounters the Monster Hunter (James Belushi) who eventually becomes a series regular who is always hard at work trying to figure out a way to exterminate all the monsters.

As for my favorite episode, it’s in season 3, You Only Scare Twice/ Less Talk More Monsters. In You Only Scare Twice, the trio has one day to scare a man that is believed to be the most difficult man to scare in the world, and as the title would suggest, he is also a spy.  What I really dug was the spy having to also do battle with an evil half-man half-robot that wants to have the world overrun by zombies.  As for Less Talk More Monsters, a radio disc jockey announces over the airwaves that hidden in the dump is $50,000 dollars waiting to be found; instantly the dump is overrun by humans, and it is up to not only Ickis, Oblina, and Krumm but also everyone at the academy to do their part to protect their lair from the humans.

Battle of the Century is another fun episode where once again the Monster Hunter returns only this time he has a giant robot that he wants to use to finally capture a monster.  The Gromble and the students waste no time at defending themselves against the Monster Hunter and create a robot of their own.  I’m a sucker for giant robots and giant monsters, so seeing them come together in this episode for this mini-battle was all kinds of fun.

All the monsters are inventive creations from the minds of Gabor Csupo and Peter Gaffney.  It doesn’t take long to see the influence from another more popular Nickelodeon series, Rugrats (another show Csupo has credit for co-creating).  This was a show I was worried how I would manage to get through, but as the show progressed it continued to improve, and I found that my dread had turned to actually having a good time with the show. With 52 episodes total and running over 20 hours, this set is something that will keep the kids entertained for quite some time.

Brent Lorentson is a horror writer and film critic based out of Tampa, Florida. With a BA in Digital Film, he co-wrote and co-directed Scavenger Hunt. His short stories have appeared in various horror anthologies. In 2019 his short script Fertile Blood will be a part of the anthology horror film Slumber Party. He is currently working on his first novel A Dark and Secret Place set to be released in late 2019. Favorite Films: Taxi Driver, Fight Club, I Saw the Devil, The Wild Bunch, Dawn of the Dead, A Clockwork Orange, Pulp Fiction, Heathers, The Monster Squad, and High Fidelity.
Awkward – Seasons 1 & 2 Machete Kills