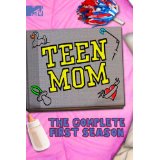 Me and my big mouth; as you may have guessed it wasn’t destiny that brought me and the first season of Teen Mom together. Reality television is not one of my favorite programs. So by now I imagine that it is pretty obvious that I went into this program with high reservations. But as it turns out, even I wasn’t about to keep them up the entire time. Deciding to think of it as a long-running documentary, I see the importance of a show like this in regards to raising awareness among teenagers considering becoming sexually active, and after watching I am grateful that a show like this exists.

Picking up where its lead-in show, 16 and Pregnant, left off, Teen Mom continues to tell the tale of Amber, Catelynn, Farrah, and Maci now that their kids Leah, Carly, Sophia, and Bentley respectively are now out of their wombs and in their arms; highlighting the struggles that each one must now undertake as they attempt to find balance and incorporate some semblance of their old lives with their new circumstance:

In the case of Amber, I believe that she struggles the most with her circumstance as a teenage mother. Having dropped out of high school when she found out she was pregnant, this former party girl now tries to split her time earning her G.E.D. and raising her daughter. Another obstacle for Amber is her relationship with her fiancé Gary, which is full of shouting matches and domestic abuse; however, the abuse comes from Amber lashing out rather than the other way around.

If I had to label one of them as the most well-adjusted with her new circumstance, it would most likely be Maci. Of course given that she was bit of an overachiever before her pregnancy, it’s not hard to believe that she would rise to the occasion. Having conceived her young son Bentley on the first time ever having sex during her junior year of high school, her dreams of attending an out-of-state college were diminished, but despite this she managed to keep herself relatively on track, graduating from high school early and enrolling in online courses at the local state college, all while remaining a committed and loving mother to her son with little aid from the her fiancé and the baby’s father, Ryan.

Offering an alternate view is the storyline revolving around Catelynn, who gave her daughter, Carly, up for adoption. I think this storyline was the most important of the series simply because it showed that just because you give your child away doesn’t mean that all your problems go away; if it anything they can become worse, as Catelynn along with her fiancé Tyler are forced to deal with the aftermath of not being involved with their daughter’s everyday life and wondering if they made the right decision.

Finally comes the most controversial of these four teenage mothers (but we will discuss that later), Farrah. As the mother of Sophia, Farrah has some obstacles of her own, primarily with her mother and family of the now deceased father of her daughter. In the beginning Farrah simply to resume an ordinary life which includes dating, something her mother is disapproving of, feeling that Farrah is neglecting her obligations as a mother to Sophia. Farrah’s storyline is riddled with drama as she continuously butts heads with her mother and receives no aid from Derek’s parents (Sophia’s grandparents) who doubt Sophia’s paternity.

The show definitely does its due diligence, even going back to after its initial filming to film a reunion episode featuring Celebrity Rehab’s Dr. Drew. The show is very beneficial in its showing of the difficulties of raising a child before you are done growing up yourself. However, the most recurring and prominent issue presented was the strain between the mothers and the fathers; the fathers aren’t always cast in the best light as far as shunning their responsibility. The diversity of each mother’s circumstance is a great addition to the show’s success, each working alongside each other without ever really contradicting one another.

Now I like to do a segment entitled “Where are they now”, given an update as to what became of these four teenage mothers courtesy of Wikipedia: Maci has opted out of outline course and returned to college where she is majoring in journalism. She also takes time to go to local high schools and speak about her experience as a teenage mother. Farrah went in a different direction; in 2012 she released an autobiography titled, “My Teenage Dream Ended.” That was her on the right path; however, in 2013 Farrah partnered with Vivid Entertainment to release her own sex tape, a decision that has been the subject of much controversy. Catelynn and Tyler remain engaged with their wedding day steadily approaching. Finally Amber: well it’s safe to say that Amber clearly has it the roughest, currently serving a five-year sentence for drug possession and failure to complete court-ordered rehab.

Jeremy Butler is a film school graduate of the International Academy of Design and Technology. He is been writing for Upcomingdiscs since 2012; however, movies have played a big part of his life for much longer. Favorite genres include horror, science fiction/fantasy, and comedy. Favorite movies are V for Vendetta, Boondocks Saints, Kiss Kiss Bang Bang, and The Godfather.
Morning “31 Nights of Terror” Embrace of the Vampire (2013) (Blu-ray)