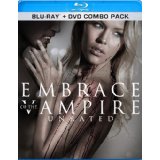 Charlotte Hawthorn (Sharon Hinnendael) is a shy college student who arrives at a co-ed campus after previously attending an all-girls Catholic school. We are quickly introduced to her friendly roommate Nicole (Tiio Horn) and Eliza (C.C. Sheffield), Charlotte’s snarky rival on the fencing team. We also learn Charlotte suffers from violent, vivid dreams — involving sex and buckets of blood — that lead to her waking up in unexpected places.

Eventually, local mystic/kook Daciana (Keegan Connor Tracy) informs Charlotte of her ancestry: Charlotte is part of a unique bloodline that fused vampire and human blood. Side effects include heightened senses, and Daciana encourages Charlotte to embrace her destiny as a vampire hunter. The problem is all the important stuff I’ve described in this paragraph doesn’t start happening until there are only 25 minutes left in the movie, and Charlotte doesn’t even go on the hunt until the last 10 minutes. (It should go without saying that the final confrontation is rushed…but I’ll say it anyway: the final confrontation is rushed.)

If it weren’t for the film’s brief, intense prologue set in 1735 Eastern Europe — or the periodic scenes in Charlotte’s mythology class — you wouldn’t really know this is a vampire movie at all. The first hour could be confused with any psychological thriller about a troubled young woman exploring her sexuality in a stressful new environment. That is to say Embrace of the Vampire has more in common with a movie like Black Swan than it does with other vampire flicks.

Embrace of the Vampire does feature some solid makeup/creature effects (when it gets around to using them). The film also has a bit of fun with our knowledge of vampire films as we try to guess which of the three men in Charlotte’s life is looking to sink his teeth into her. Is it ever-present mentor Dr. Duncan (Robert Moloney), whose eyes are suspiciously sensitive to light? Maybe it’s the suave, mysterious Professor Cole (Victor Webster), Charlotte’s mythology teacher and fencing coach. Of course, you can’t rule out Chris (Ryan Kennedy), the relentlessly nice guy who pursues Charlotte.

This remake has two things in common with its predecessor: a heroine named Charlotte (along with a few other key character names that match up), and lots of attractive young ladies in various states of undress. Embrace of the Vampire is mostly borrowing the title from the original, rather than slavishly following its story. To the new movie’s credit, the story finds a variety of ways — a game of strip trivia, random scenes in the girls locker room, and some steamy girl-on-girl action — to keep the audience titillated. The scenes don’t quite cross over into camp because the performances — led by a suitably soft-spoken and freaked out Hinnendael — are surprisingly good, given the trashy material. This Vampire may lack some of the bite horror fans crave, but it’s likely to get your blood going in other ways.

Embrace of the Vampire is presented in an aspect ratio of 1.78:1. The 1080p image is arrived at with an AVC MPEG-4 codec at an average of 28 mbps. Horror movies tend to live in dark, dreary corners, so I was absolutely struck by the vibrant picture on this Blu-ray. Embrace of the Vampire was shot in Canada, and the film’s woodsy setting makes for an earthy presentation that is miles away from the grit and grime of other low-budget horror offerings. Contrast and color are each spot-on, and the clear, detailed picture is equally impressive whenever the action moves indoors. Black levels are nice and deep for a few crucial nighttime scenes. I already covered in my review why Embrace of the Vampire doesn’t play out like your average horror film. This impressive Blu-ray from Anchor Bay continues that theme because Embrace of the Vampire certainly doesn’t look like your average horror film.

The Dolby TrueHD 5.1 track does nice, subtle work until the brief instances when terror crops up. The ambient noises from the rears — courtesy of scenes in the forest or a crowded classroom/coffee shop — are omnipresent, but stop just short of being fully immersive. The track naturally becomes more aggressive during “action” scenes — like the mysterious voices in Charlotte’s head blasting out of the rears, or a galloping horse in the prologue pounding through the subs — but is otherwise surprisingly understated. Dialogue (assuming Embrace of the Vampire fans care about such things) comes through clear as bell.

In addition to this remake, Anchor Bay has released the 1995 original on Blu-ray. (I can’t speak for the original, but this disc doesn’t come with any special features.)

Don’t overthink this one. If you’re craving a legitimately scary vampire movie, you’re probably better off looking elsewhere. If you’re searching for a reasonably entertaining thriller with a handful of hot topless girls, then step right up.