How I Met Your Mother: Season Eight 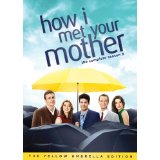 I can recall with perfectly clarity my first encounter with this television series: it was rainy day and I was extremely bored; my vast collection of DVDs held no appeal, and I was eager for something new. I was in Target, browsing for something to fit the bill, and I came across the first season on sale. At this point I had heard of the show, but the only thing I knew about it was that NPH (for those not in the know, N.P.H. are the initials of Neil Patrick Harris) was involved. Now what started as a way to alleviate a boring day has spawned to watching all 184 episodes (that count does not include the season currently airing) and still being just as captivated as I was with the series as when I watched the pilot.

When the series left off last season, Barney had become engaged to Quinn (his stripper girlfriend), Marshall and Lily are now parents of a little boy that they named after Marshall’s dad, Robin is dating someone; however, the news of Barney’s upcoming nuptials hits her hard though she does her best not to show it, and as for Ted, he has been reunited with Victoria, his girlfriend from the first season. She has just run away from her own wedding and made her way to Ted and proposed that the two run off into the sunset together. The final shot of the season showed the pair doing just that.

Season 8 kicks off as all the other season do with a flash-forward of an upcoming event, in this case, Ted (Josh Radnor) sitting on the bench at the train station in a tuxedo. As an woman makes a random comment just to make conversation, Ted in true Mosby-fashion goes off in one of his tangents as he attempts to tell the lady how he came to be on that train station bench.  When the season resumes, Ted and Victoria are stilling driving away hand and hand, but Ted quickly backs out of that plan. Knowing the pain of being left at the altar, he is hesitant to subject anyone else to that type of pain. Insistent that Victoria at least leave a note behind for her abandoned fiancé, hilarious hijinks follow as Ted endeavors to deliver the note undetected. In the end, even he was conflicted. In the beginning Ted still manages to keep the spoils as he and Victoria trying to rekindle their past romance. Marshal and Lily are suffering the effects of no sleep and are basically semi-functioning zombies; realizing that they can’t handle the weight alone, they decide to get a nanny, and there are a few laughs as they try to settle on one; another source of entertainment came when it was time to pick a godparent for little Marshal, as the candidates compete and argues over who would be best suited for the job. In the case of Barney and Robin, Barney’s engagement stirs up a lot of feelings for the two, and a majority of season geared towards examining these feelings as both at several different points question whether their splitting up was the right choice. Speaking of stirring up feelings, Barney and Robin aren’t the only two whose past feelings may be returning.

This show’s greatest strength is its consistency; every season is neatly tied together, and even the most trivial fact can be traced back to the larger picture. However, the show’s greatest strength could also be considered a flaw. Variety is important, and though the show does provide plenty of that, it is also still recycling things from the first season such as the revolving door that can be considered Ted’s feelings for Robin; it keeps coming up every couple of seasons; in the beginning it made sense, but now it has sort of become a crutch for the show in recent years.

The cast is fantastic as usual, there is an easy banter that exists between these five that can only be found in true friendship. This season like last season also saw the return of a beloved ex-flame of Ted’s, Victoria played by Ashley Williams. The return of Williams was very exciting as she was my hope for the mother character way back when she was introduce in the first season (to find out of if she is, you’re going to have to buy the DVD). There was just something about the interactions between Radnor’s character and hers; they complimented each other and they just looked good together; if you saw them walking down the street, holding hands, you would just buy it. Aside from Victoria, there also a few other returning faces such as Rachel Bilson, Chris Elliot, Becki Newton, and many others.

There was one thing I had hoped to see this season and didn’t, since watching this series there has been a recurring theme that I love more than anything else: the slaps. Unfortunately there were any this season, but that’s quite all right because given that this upcoming season is slated to be their last, that simply means that there’s going to be plenty of slaps happening this season, and I’m looking forward to it.

The Final Page Part 1 and 2

Jeremy Butler is a film school graduate of the International Academy of Design and Technology. He is been writing for Upcomingdiscs since 2012; however, movies have played a big part of his life for much longer. Favorite genres include horror, science fiction/fantasy, and comedy. Favorite movies are V for Vendetta, Boondocks Saints, Kiss Kiss Bang Bang, and The Godfather.
“31 Nights Of Terror” Contest: Win A Monsterous Holiday From Arc Entertainment “31 Nights Of Terror” The Conjuring (Blu-Ray)