“31 Nights Of Terror” The Conjuring (Blu-Ray)

Posted in: Disc Reviews by Brent Lorentson on October 22nd, 2013 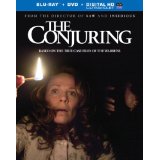 James Wan is simply a director who continues to impress me.  Ever since Saw was released, I’ve been a fan of his visual style that he brings to every film.  Let’s face it, Saw is pretty much the biggest horror franchise of the past decade, and it all started with a simple little indie film that took place mostly inside a dirty bathroom.  When Death Sentence came out, I was floored by how well he managed to construct a Death Wish film for a new generation.  The parking garage scene was just freaking awesome.  Then along came Insidious, which was another massive smash for Wan.  Sure, the movie had its creepy moments, but for me the final act just fell apart.  Now Wan is set to release The Conjuring upon the masses; is it another smash hit like Saw and Insidious, or will this be destined to fall flat as Dead Silence did?

The Conjuring is based on a true story about famed paranormal investigators Ed and Lorraine Warren who are staples of the paranormal investigation history and made famous for their “findings” with the Amityville investigation in Long Island.  With ghost-hunting shows saturating the cable channels, it was inevitable that we would finally get a tale about the investigators who somewhat started it all.  But this isn’t so much just about the Warrens, but instead about the most terrifying case of their lives.

Patrick Wilson and Vera Farmiga play the parts of the Warren duo, and I can’t help but first point out how well these two worked together.  This is a couple I could believe in, not only in the sense of them being husband and wife but also as partners who have fought against evil and have lived with it for years.  This is a battle-tested couple, but their love and faith have managed to get them through everything even when confronted face to face with pure evil, which we see in one of the films they play during one of their lectures.  It’s these lectures where their fame and exploits are revealed where the full audience eagerly listens to their tales involving the paranormal, their most famous investigation being about a possessed doll named Annabelle.  (Of course director couldn’t resist the urge to involve yet another creepy doll in his film.)

When we first meet the Perron family, they have recently bought a home in Harrisville, RI.  Ron Livingston plays the part of Roger, the overwhelmed father with five darling daughters, and then there is Lili Taylor in the part of the stay-at-home wife, Carolyn.  Their new home is massive and beautiful, hidden away in the woods.  As “Time of the Season” by The Zombies plays, we are given a beautiful steadicam shot that moves through the home following the daughters as the family is moving in their belongings.  This shot is only an introduction to the beautiful cinematography that fills this film.

No time is wasted as the Perron family is subjected to the actions of the entities that are haunting their new home.  One of the genuine scares revolves around a game the girls play together Hide and Clap.  For those that have seen the trailer, it offers a glimpse of the scene but thankfully not the entire payoff.  It’s the film’s ability to deliver a satisfying scare that has me appreciating the film days after viewing it.  The approach is very much in vein of older horror films, most notably The Poltergeist and even The Amityville Horror.

Sure, the film plays out like many haunted house and exorcism films that have come before it, but where The Conjuring shines is that it keeps it simple.  Special effects may be riddled throughout the film, but it’s simply done so low-key that it seems as though it were done all on set.  Seeing the old-school approach to paranormal investigation as compared to seeing people stumble around in green night vision also helps with more atmosphere than any of the “reality” shows out there.

What makes this film work is the cast.  It’s not just one person who makes this film; everyone has their moment to shine.  Watching the girls interact together helped make it work; seeing their terror in their eyes when the Warrens first arrive as well has their hope when they survive their first night without incident allowed this to feel more genuine.  The kids are being kids, which is refreshing considering most films seem to want to go the route of having their child actors be the equivalent of little adults.  As the girls are allowed to be kids, they are all the more vulnerable, and that’s what makes the scares more genuine, because we know the entities in the house see the vulnerability as well.

We even get a glimpse as to how the investigation affects the Warrens and their home life, and this would have made an equally engaging film simply about how they live with a haunted museum in their home.  The Warrens have a nasty habit of collecting haunted objects and keeping them in their home, not to mention they have a daughter of their own who likes to explore.  If I were the little girl I wouldn’t have a night light in that house, I would have floodlights running nonstop.

Certainly some of the events that take place throughout the film seem a bit too over-the-top to believe, and to a degree it’s your own beliefs in the afterlife that I feel will gauge how “terrifying” this film is.  For a nonbeliever I can see some people shrugging their shoulders and feeling there should have been more. As for me this film tapped into the believer in me and left me wondering if evil could follow us where ever it pleased and what it was truly capable of.

The Conjuring is presented in its original aspect ratio of 2.40:1. The 1080p image is arrived at with an AVC MPEG-4 codec at an average 25-30 mbps. The detail of this high-definition image presentation lives in the shadows and the textures. Wan delivers wonderful production design that just oozes atmosphere here. Black levels remain strong, and you end up with brilliant shadow definition. Colors are a bit drab, and that’s of course intended. Wan wants you to experience a hopelessness with his palette, and the disc delivers just that. It’s easy to feel that dust in your own throat. I’m sure I gave out a cough or two.

The DTS-HD Master Audio 5.1 is another part of the atmosphere. Wan knows how to use sound design to deliver the scares. Here that translates into a very active and deep sub response. From door knocking to the score itself, the audio presentation delivers room-shaking low end. The dialog never gets lost in the deep tones. The surrounds also deliver nicely. There are some creepy wing beats in the rear that will have you looking over your shoulder. Don’t underestimate how important the sound is to deliver the jumps and chills.

Face To Face With Terror: (6:39) Meet the real Perron family. They tell their story here.

A Life In Demonology: (15:37) The real Lorraine Warren along with others tells the couple’s story. This offers some history into how they met and their life ghost hunting.

Behind The Scenes – Scaring The @$*% Out Of You: (8:04) This is the behind-the-scenes stuff. Cast and crew offer up their takes, and you get to catch a brief glimpse behind the cameras.

In my humble opinion I believe James Wan made a horror film that will become a staple of the Halloween season.  How he captured the life of the 70’s and replicated it for the screen is all the more impressive considering its budget.  I read earlier a sequel is already in the works, and to a point that leaves me excited but yet a little sad.  I’d love to see the further exploits of the Warrens and how the events of the film impact them later on, but if it’s about the Perrons I feel perhaps it will take away from the believability factor of the film.  The most important thing to be learned after watching the film: always double check to make sure no one ever died on the property, and if they did, stay as far away as you can.

Brent Lorentson is a horror writer and film critic based out of Tampa, Florida. With a BA in Digital Film, he co-wrote and co-directed Scavenger Hunt. His short stories have appeared in various horror anthologies. In 2019 his short script Fertile Blood will be a part of the anthology horror film Slumber Party. He is currently working on his first novel A Dark and Secret Place set to be released in late 2019. Favorite Films: Taxi Driver, Fight Club, I Saw the Devil, The Wild Bunch, Dawn of the Dead, A Clockwork Orange, Pulp Fiction, Heathers, The Monster Squad, and High Fidelity.
How I Met Your Mother: Season Eight The New Three Stooges: Complete Cartoon Collection