Posted in: No Huddle by Brent Lorentson on October 24th, 2013 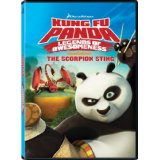 The Furious 5 are back in the new collection of episodes from the Nickelodeon hit show, inspired by the film Kung Fu Panda.  It wasn’t too long ago that I reviewed the first batch of episodes in the collection Good Croc, Bad Croc, and I had a good time with that set.  Now with the new collection, would it fare as well as the first, or will it blow my mind with its kung fu awesomeness?  Well, why waste any more time, and get right to it. For those unfamiliar with the show or movies, that is fine, because the opening credit music does a good job catching you up to speed telling Po’s story from working at his father’s restaurant to becoming the great dragon warrior and defender of the village.  In the feature films, Po was voiced by Jack Black, but for the animated series Mick Wingert takes over the voice work duties, and he nails it.

In this DVD release we are given seven exciting episodes that the entire family can enjoy.  The first episodes Scorpions Sting and Love Stings focus on the female villain Scorpion; though small, she makes up for it with her cunning ways and ability to create dangerous potions.  Whether it’s Scorpion using her abilities to turn Monkey into a mind-controlled zombie or brainwashing Po’s father into falling in love with her, she always manages to have a trick up her pincher.  Love Stings actually has one of my favorite moments in the set, where Po and Monkey practice in the new art of Dizzy Kung Fu; it’s silly and fun and seems to be a wink to Jackie Chan’s Drunken Master.

The episode Monkey in the Middle shows us that the minds behind the series want to deliver more than just goofy humor and martial arts fighting.  With this episode there is a thief in the village and all fingers seem to point to Monkey, that is until it is revealed that it is actually Monkey’s brother who is committing the crimes.  The episode explores the way we view loyalty to family in relation to loyalty to friendship.  Sometimes making the right decision difficult even when the greater good is at stake; turning on the ones you love is never an easy option.

But things don’t stay too serious, and in fact they just become over-the-top ridiculous in Kung Shoes, where Po receives a magical pair of shoes that make him the most powerful martial arts master; unfortunately the shoes have a mind of their own.

As for my favorite episode of the bunch, Qilin Time, this is a story I wish got stretched out; for some reason this one just left me with a big smile.  As the town continues to mock Po’s father and his claims of seeing a mythical creature in the woods, he comes to a breaking point and sets off on a little adventure to find the monster with the reluctant aid of the Dragon Warrior, Po.  This brief personal journey between father and son is something that easily could have been expanded to a feature.  This is when the show for a moment transcended being just a simple children’s show and took a moment to get into the heart of family relationships.  All sons at some point want to prove to their father the man that they’ve become, and most fathers want to live up the way their children proudly see them.  The writing is never heavy-handed with this and its all subtext, but it’s there.

There are many episodes in the series that have still not been released to DVD, but the more I watch, the more I’m appreciating this series.  With clever writing and above-average animation, it’s enough to keep me watching, but with the martial arts action sprinkled in I’m quickly becoming a fan of the show.

Brent Lorentson is a horror writer and film critic based out of Tampa, Florida. With a BA in Digital Film, he co-wrote and co-directed Scavenger Hunt. His short stories have appeared in various horror anthologies. In 2019 his short script Fertile Blood will be a part of the anthology horror film Slumber Party. He is currently working on his first novel A Dark and Secret Place set to be released in late 2019. Favorite Films: Taxi Driver, Fight Club, I Saw the Devil, The Wild Bunch, Dawn of the Dead, A Clockwork Orange, Pulp Fiction, Heathers, The Monster Squad, and High Fidelity.
Shrek: The Musical (Blu-ray) “31 Nights of Terror” Carrie (2013)