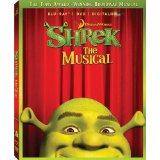 Hollywood (rightfully) gets a lot of flack these days for being creatively bankrupt. But you can’t throw a rock down Broadway without hitting the marquee for a musical that’s based on an existing film. It’s not exactly a new phenomenon — and it doesn’t always work — but some of the most successful and beloved musicals feature stories you already know and fell in love with on the big screen. The trend seems to have really picked up at the turn of the century, and it doesn’t appear to be slowing down anytime soon. So adapting a massive hit like Shrek for the stage must’ve been a no-brainer.

Then again, Shrek wasn’t your typical cartoon musical. The most notable “musical number” involved Smashmouth’s cover of “I’m a Believer” — remember when “Smashmouth” was a thing? — and the film, based on William Steig’s book, actually took some not-so-thinly-veiled shots at the Disney machine. Although I’ve enjoyed the various Shrek films on their superficially lighthearted terms, I’ve always had an irrational grudge against the first one after it beat out the infinitely-superior-in-every-way Monsters Inc. for the Best Animated Feature Oscar more than a decade ago. However, I’m a semiprofessional, so I put aside my bias when I sat down to review Shrek: The Musical, now out on Blu-ray.

In the musical, Shrek (Brian d’Arcy James) remains a cranky green ogre who is content to live in his stinky swamp by himself. When the swamp is invaded by a bunch of displaced fairy tale characters (led by John Tartaglia’s Pinocchio), Shrek sets out for the Kingdom of Duloc to see the diminutive Lord Farquaad (Christopher Sieber) and get his privacy back. Along the way, Shrek meets a chatty Donkey (Daniel Breaker), who insists on tagging along. Farquaad, who needs to marry a princess to become king, charges Shrek with rescuing Princess Fiona (Sutton Foster) from her perch atop a tower guarded by a dragon.

I mentioned the first film because, despite the fact that there were three Shrek films by the time the musical opened in late 2008, the Broadway show exclusively focuses on the original movie. (Still, you might want to keep your eyes open for a silent cameo by Shrek 2 breakout Puss in Boots during “Travel Song.”)

One of the reasons I’m lukewarm on the Shrek movies is because they seem more concerned with packing in as many random pop culture references as possible — presumably to keep the adults in the audience entertained — than they are with presenting a genuinely engaging story. The fast and funny musical, with book and lyrics by David Lindsay-Abaire and music by Jeanine Tesori, hits all of the movie’s major story beats. But with a 130-minute running time — the movie clocks in at a much more kid-friendly 95 minutes — the Broadway show has time to expand and deepen the main characters.

Shrek: The Musical, for example, opens with a lovely ballad sung by Shrek’s parents as they send the young ogre away at age 7. Unfortunately, their serenade is about the pitchforks he’ll have to dodge from terrified regular people for the rest of his life. The show, like the movie, is at its best when it’s being irreverent and a bit subversive. (The original production was helmed by Jason Moore, who previously directed the Sesame Street-skewering “Avenue Q.”) I was also happy to see the crude fart/burp jokes from the movie are mostly confined to one song (“I Think I Got You Beat”), which leaves more time to develop the friendship between Shrek and Donkey, and the connection between Shrek and Fiona. (Heck, it even turns out that Lord Farquaad has daddy issues.)

The performance captured on this brand new Blu-ray was actually recorded during the show’s original run in 2009, which means we get to see the excellent original Broadway cast at work. James does a terrific job emoting through pounds of makeup as Shrek, and this Blu-ray gives you a much closer look at his performance than you’d get from the mezzanine. Breaker as Donkey is absolutely reminiscent of Eddie Murphy’s motormouth work from the movies, but the actor’s affable, eager performance stops well short of a straight-up impersonation. And while Sieber works hard to steal every one of his scenes as Lord Farquaad — the actor performed the role on his knees, with Farquaad’s tiny, limp legs dangling in front of him — Foster gets the prize for Best Character Upgrade. She mixes a thoroughly modern, cool-girl sensibility with a reverence for what it takes to put on a good ol’ fashioned Broadway show. (“Morning Person” is a showcase for Foster’s soaring voice and her dance moves.)

The 17 all-new songs are a bit “paint-by-numbers” for a Broadway show: a mournful ballad here (“When Words Fail”, “Who I’d Be”), an outsider anthem there (“Freak Flag”, which is a catchy showstopper, but could honestly be inserted into about a dozen other musicals). Most of these tunes are entertaining enough while you’re listening to them — including the gloriously random “Defying Gravity” shout-out during “What’s Up, Duloc?” — but I doubt anyone’s going to be fondly rehashing any of them over the next few decades. The musical as a whole winds up being a bit bloated, but I found it more affecting than the blockbuster it’s based on.

Shrek: The Musical is presented in an aspect ratio of 1.78:1. The 1080p image is arrived at with an AVC MPEG-4 codec at an average of 25 mbps. On close-ups, the sharpness is good enough that you can see the outlines of the actors’ various headpieces/hairpieces. The clarity on those close-ups also gives you an excellent, detailed look at the lavish production design and the Tony-winning costumes. (The show picked up eight Tony nominations overall, including Best Musical.) Colors are bright and peppy, with a particular emphasis on (surprise!) green. Unfortunately, the black levels aren’t as on-point as they needed to be; objects blended into each other during dim or transitional scenes. On top of that, the medium shots are adequate, but a noticeable downgrade from the remarkable close-ups. Overall, this is an above average, dynamic visual presentation of a stage show, but it could’ve been even more dazzling.

The DTS-HD Master Audio 5.1 track is at its best when it’s recreating the experience of sitting in an orchestra seat at The Broadway Theatre. The conclusion of each musical number is met with all-encompassing applause, and the rears periodically crank out bits of laughter that make it sound like the guy 10 rows behind you chuckled at a joke. As for the music itself, this is a mostly well-balanced track (James’ vocals only got lost in the mix briefly during an early song; also, the music during the “I’m a Believer” finale is somewhat muddled) that delivers plenty of oomph. Speaking of oomph, the subs perk up for the dragon’s first appearance. It’s not the most dynamic track in the world, but the music, not surprisingly, remains the star of the show. For better and (slightly) worse, the track faithfully conveys the experience of seeing a show with a lively audience.

Shrek: The Musical Songbook: This feature lets you skip directly to some of the show’s tracks: “Don’t Let Me Go”, “I Know It’s Today”, “Donkey Pot Pie”, “Who I’d Be”, “When Words Fail”, “Build a Wall”, “Freak Flag” and “I’m a Believer.” You can either sing along or just watch. Not really sure why this is here, since you can do the exact same thing by going to the chapter menu and turning on the subtitles. Features a Play All option.

From Swamp to Stage — The Making of Shrek: The Musical: (8:06) Cameron Diaz (the voice of Fiona in the Shrek movies) stiffly introduces this behind-the-scenes look at the making of the musical. Director/choreographer Rob Ashford and director Jason Moore talk about expanding the world of the first movie. This is ultimately a superficial, skippable mini-doc that could’ve been more interesting.

Shrek: The Musical concluded its national tour and West End run earlier this year. So unless you’re willing to book a flight to the United Kingdom to catch next year’s U.K. national tour, this Blu-ray is your best shot at seeing this funny, frothy, fractured fairy tale of a musical. (And it absolutely beats hunting down grainy, shaky clips on YouTube.)