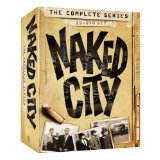 “Ladies and gentlemen. You are about to see the Naked City. I’m Bert Leonard, the producer. As you can see we’re flying over an island, a city, a particular city…and this is the story of a number of people, a story also of the city itself. It was not photographed in the studio. Quite the contrary. The actors played out their roles in the streets and the buildings of New York itself.”

The Naked City started as a novel by Jules Dassin of the same name. It was published in 1948 and soon became a feature film which would also use the same title. The novel itself was inspired by a 1945 photography book by Arthur Fellig. The film’s style was inspired by Italian filmmaker Roberto Rossellini’s film Roma, città aperta (Rome, Open City) in 1945. This style consisted of a documentary-like format with narration and a gritty “in the street” cinematography. The television series would retain this style, and that would set it apart from anything else that had been on television to that point. The narrator would set the mood and fill in basic plot points. He would also fill us in on police procedure and information of the inner workings of the New York Police Department. Jack Webb would soon after take that same style and transfer it to L.A., and the result was Dragnet.

In the first year we had two main detectives. Lt. Dan Muldoon was played by John McIntire. He was a veteran who had become a “legend on the force”. He was partnered with newly promoted Detective Jimmy Halloran, played by James Franciscus. Halloran was a Korean War vet and had spent 18 months as a patrolman before getting his detective shield and being assigned to Muldoon, who gave him the wisdom of his years of experience. This first year would consist of 39 half-hour shows. Toward the end of that season McIntire became weary of traveling to from L.A. to New York where the series was shot on the real streets and locations. His character would suffer a fiery death in a dramatic car crash while trying to protect a mob witness. Halloran would continue the season with Detective Frank Arcaro, who was a more minor character before this, played by Harry Bellaver. The new boss was Lt. Parker played by Horace McMahon.

After the first season, The Naked City disappeared from the schedule. After a year’s absence, the series returned with a few changes. James Franciscus was now also gone. The format went to a full hour. Producer Herbert B. Leonard was no longer the narrator. The intro narration was cut completely. The “The” was dropped from the title and the new theme music was composed by Billy May. The main cop was now Detective Flint, played by Paul Burke. Parker remained as the lieutenant and Frank Arcaro became even more prominent.

What never changed was the show style. The focus was never on the cops themselves. The focus was usually on the criminals and/or the victims of the crimes. By using the genuine streets of the city, New York became very much a player in the show. And the series brought you down to street level. Unlike today where a show might be set in New York or Miami and filmed in Hollywood, all of this footage was authentic. The show didn’t rely on reused establishment shots. The actors were there with the real people. As a consequence of the writing, style and locations, the series serves today as a very realistic time capsule of the city in the 1950’s and 1960’s.

The series took hard looks at the social issues of the times. Many of the characters lived in broken-down tenement buildings and on streets littered with both garbage and gangs. Issues like prostitution, drug and alcohol abuse, corruption, inner-city disease and poverty all took up more attention than the police or even the crime of the week. Often criminals would be depicted as victims of circumstances beyond their control or basically good people who get in over their heads. This made the stories far more compelling than they would have been otherwise. You feel as though you’re seeing real people in realistic situations. The writing was true to life. Any one of these stories could have and likely did happen in the real world.

The series was created by Stirling Silliphant, who wrote a great number of the episodes. He would go on to write such films as Clint Eastwood’s The Enforcer, The Poseidon Adventure and Village Of The Damned. The series also sported a large collection of the best writers in the business and included a certain Gene Roddenberry.

This collection is quite an impressive haul for fans of television history. You get all four seasons in individual plastic cases. These four boxes come in a sturdy box that fits rather nicely on your media shelf. Extras are pretty much limited to some commercials of the era. The video quality certainly reveals the show’s age, but they look pretty good all the same. The condition is as good as you have any right to expect. There are 29 total DVD’s in this set. It’s a huge collection for the money. It’s a pretty good bargain.

There can be no doubt that The Naked City’s influence can be felt on shows of today. There’s no doubt in my mind that such greats as Steven Bochco and Dick Wolf were students of the series. Jack Webb might as well have committed grand larceny. No one who is a fan of police drama should overlook this one.

The presentation was so realistic that some guest stars complained that people thought they were real crooks. The truth is that this was actually a great show to be on if you were starting out. The guest cast is a virtual who’s who of stars that came out of those years. Look at this short list of some of the then-unknowns who played at times bit parts in the show: Dustin Hoffman, Peter Falk, Robert Redford, Dennis Hopper, Robert Duvall, James Caan, Ed Asner, Walter Matthau, Roddy McDowall, Telly Savalas, William Shatner, Martin Sheen, Peter Fonda, Jack Klugman, George C. Scott, Carroll O’Connor, Jean Stapleton, Burt Reynolds, Martin Balsam, Mickey Rooney, Gene Hackman, Alan Alda, Christopher Walken, Robert Culp, Burgess Meredith, John Voight, Diane Ladd and Clifton James. You won’t find a television series with that kind of guest list anywhere else. With that many quality stars it’s no wonder “There are 8 million stories in the naked city…”

Gino Sassani is a member of the Southeastern Film Critic's Association (SEFCA). He is a film and television critic based in Tampa, Florida. He's also the Senior Editor here at Upcomingdiscs. Gino started reviewing films in the early 1990's as a segment of his local television show Focus. He's an award-winning recording artist for Omega Records. Gino is currently working on his 8th album Merchants & Mercenaries. Gino took over Upcomingdiscs Dec 1, 2008. He works out of a home theater he calls The Reel World. Favorite films: The Godfather, The Godfather Part II, The Body Snatcher (Val Lewton film with Karloff and Lugosi, not the pod people film), Unforgiven, Gladiator, The Lion King, Jaws, Son Of Frankenstein, The Good, The Bad And The Ugly, and Monsters, Inc.
Blackfish (Blu-ray) Contest: Win Happy Tree Friends: Complete Disaster From The Media Grind