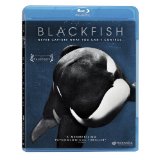 “To this day, there’s no record of an orca doing any harm to any human…in the wild.”

Orcas are sometimes referred to as “blackfish,” but Gabriela Cowperthwaite’s thrilling, thought-provoking documentary examines why they’re most commonly known as “killer whales.” The movie’s obvious standout moments involve breathtaking footage of these massive animals violently turning on their trainers. Although some viewers will undoubtedly make the leap to wondering whether it’s ok to keep any animal in captivity, the thing that elevates this film is that it serves as an eloquent argument against keeping this particularly majestic, highly-social beast in a concrete pool.

Blackfish opens with a sneaky, brilliant fake-out. We see a underwater footage of a monstrous killer whale circling a seemingly hapless diver, and we hear the distress phone call from SeaWorld Orlando to Orange County Fire Rescue describing a horrific attack on one of the park’s trainers. Turns out the footage we’re seeing is the routine run-up to a stunt called the “rocket hop,” where the killer whale swims underneath and helps launch its trainer into the air. It’s a neat trick to illustrate the inherent danger and unpredictability of performing with animals, even ones that have been trained extensively. (Of course, that sense of “danger” and “unpredictability” is a big part of the reason the people in the stands plunked down their money in the first place.)

Unfortunately, the distress call is all too real. On Feb. 24, 2010, Dawn Brancheau — an experienced, charismatic SeaWorld trainer — was killed while performing with 12,000-pound male orca Tilikum. (I’ll spare you the gory details here, but the film reveals some of them through court documents from the Occupational Health and Safety Administration’s (OSHA) subsequent lawsuit against SeaWorld.) From there, Blackfish turns back the clock to explore Tilikum’s violent past, as well as the various reasons a killer whale might live up to its name while in captivity.

The film’s “stars” are a roster of former SeaWorld trainers who collectively paint a pretty damning picture of their former employer. (Cowperthwaite said she repeatedly reached out to SeaWorld for comment during the making of her film, and they repeatedly declined; they did, however, issue a statement after the documentary aired on CNN in October.)

Besides your garden variety greed — Tilikum is incredibly valuable as a breeder, though I feel like I would’ve gotten that message even without seeing footage of his sperm being forcibly collected — there are also unsavory accusations of alleged cover-ups to maintain the orcas’ family-friendly image. This includes labeling the Brancheau accident as “trainer error” and withholding details about attacks on other trainers. The temptation is to think these trainers are sucking on a bunch of sour grapes before you realize most of them are harder on themselves — for being so naïve and blindly walking the party line — than they are on SeaWorld. For me, the most eye-opening revelation came early on, when one of the former trainers talked about the main requirements for the job; instead of a marine biology degree or any sort of animal expertise, you mostly need charisma, and you need to look good in a wetsuit.

Cowperthwaite intersperses vintage, sunny SeaWorld commercials to remind the audience why these wondrous animals capture our imagination in the first place. The orca, specifically, is painted as a smart, highly-emotional beast that is particularly ill-suited to being kept in captivity. There’s footage of orca’s being hunted and collected in Puget Sound from the 1970s. When the film gets to the 1980s, we meet Tilikum, the largest killer whale in captivity and an animal that has been linked to three human deaths. Prior to Branchaeu, Tilikum was one of three whales in the tank where SeaLand trainer Keltie Byrne drowned in 1991 (the Canadian park closed shortly thereafter); meanwhile, a man named Daniel Dukes was found dead, nude, and draped over Tilikum in SeaWorld in 1999.

Blackfish tactfully doesn’t show us any of these lethal encounters, although an eye-witness account of Byrne’s death from park visitors/sisters Corinne Cowell and Nadine Kallen is suitably chilling. However, there is footage of a few incidents that resulted in serious injury; the material is as gut-punching as anything a big-time Hollywood director could conjure up. The tensest sequence involves orca Kasatka grabbing a hold of supernaturally composed Ken Peters’ foot with its teeth and repeatedly dragging him to the bottom of the pool during a performance. We also see heartbreaking footage of Brancheau during the first part of her ill-fated final performance with Tilikum.

As unsettling as those snippets are, Blackfish wouldn’t work nearly as well if it were merely a crusade to shut down SeaWorld. Instead, the documentary succeeds because it shows you the fascination and love — from fans who visit these parks, and from trainers who say they stuck with their job for too long because they didn’t want to abandon their orcas — these complex animals inspire.

Blackfish is presented in an aspect ratio of 1.78:1. The 1080p image is arrived at with an AVC MPEG-4 codec at an average 18 mbps. The baseline for the HD presentation of Blackfish is the modern day talking-head interviews with the various former trainers and marine biologists, and those images look suitably warm and sharp. (There is also some brief, stunning contemporary footage of orca’s in their natural habitat.) However, some of the most impactful images in Blackfish come courtesy of fan-made, SD camcorder footage. Obviously, that stuff is never going to look anywhere near HD quality, but I was blown away by how well this Blu-ray conveyed that older material. There’s remarkable clarity in the daytime footage and strong separation in the darker, murkier segments in the water. The film also occasionally features bright animated graphics to illustrate the OSHA lawsuit (because no cameras were allowed in court) and Tilikum’s offspring. Overall, this Blu-ray from Magnolia Home Entertainment delivers a terrific and versatile image.

The DTS-HD Master Audio 5.1 track makes a nice first impression early on. As the surround system purrs out Jeff Beal’s subdued score, we get a pretty clear reproduction of that distress call to Orange County Fire Rescue. (Cowperthwaite subtitles the conversation, just in case.) However, the most crucial function of the track is to deliver the information from the talking-head segments — which ranges from scientific data to emotional recollections — in a clear way, which it does quite well. Not surprisingly, the aural quality varies depending on the source. (For example, those vintage, mono SeaWorld commercials are naturally confined to the front speakers.) Still, this is a nice complement to the more impressive visual presentation.

Commentary with director Gabriela Cowperthwaite and producer Manuel Oteyza: Cowperthwaite identifies herself, first and foremost, as a mother who used to take her children to SeaWorld. (In other words, she’s no crusading animal activist; she also makes it clear the endgame is not to shut down SeaWorld.) The director does almost all of the talking here — though it’s clear Oteyza was crucial in pulling a lot of the material together — and it’s fascinating to listen to her discuss the choices she made, like starting the film on a positive note to reflect the optimism and eventual disillusionment of the trainers. We also learn the filmmakers came upon a lot of the SeaWorld footage as a result of the OSHA lawsuit.

Kanduke: (2:18) Ex-trainer Dean Gomersall shares his harrowing account of the death of Kanduke, the whale that preceded Tilikum as SeaWorld’s primary breeder.

“Death by Mosquito” in Marine Parks: (3:02) John Jett discusses the science behind the orcas’ unnatural exposure to mosquitoes while living sedentary lives of captivity in Florida. (Obviously, mosquitoes aren’t really an issue when the whales are roaming free in the ocean.)

Orca Teeth Show the Stress of Orcas in Captivity: (2:51) The self-explantory title of this featurette has Jeffrey Ventre explaining, in graphic detail, how orcas damage their teeth against steel gates and other obstacles, as well as how it adversely affects their immune systems.

Recollections of a Former SeaWorld Trainer: (5:11) Former trainer John Hargrove says he gave this interview one week after resigning from SeaWorld and relays an amazing tale about how one of his whales seemed to take it easy on him after he suffered an injury during a performance.

The Truth About Wild Whales: (4:40) Naomi Rose quickly dispels the notion that orcas are aggressive toward humans in the wild, and flatly states they are at the top of the list of animals that should not be in captivity.

Alternatives to Captivity: (2:17) Rose is back to helpfully suggest retiring orcas and other whales to open sea pens.

A Note from director Gabriela Cowperthwaite: (8:26) Cowperthwaite once again maintains she didn’t set out to court controversy with her film. She was curious as to how an experienced, accomplished trainer could be killed, so she wanted to make a film about human relationships with animals. The director also discusses her decision to use the former trainers as storytellers and shares her belief that a good documentary should incite anger and inspire hope.

No one associated with this film seems to want SeaWorld to disappear. Besides their overwhelming amount of invaluable research and work with other marine wildlife, SeaWorld is pretty much the only zoological institution with the resources to make a significant impact on the way these whales are treated. Blackfish only clocks in at 83 minutes, and each of those minutes is dedicated to the orca. The documentary intentionally eschews other SeaWorld wildlife, but it results in a more developed and focused film that has a greater chance of getting people to think about connecting with orcas in a more humane setting. (Like those sea pens.)

Cowperthwaite is no muckraker, but her film might still make you think twice about your next trip to SeaWorld. The key word in that previous sentence is “think.” This Blu-ray — with its comprehensive, stimulating bonus material — does an exceptional job of getting audiences to think without telling them what to think.