Posted in: No Huddle by Archive Authors on November 22nd, 2013 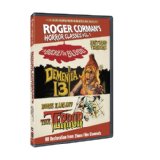 Roger William Corman was born on April 5, 1926. If he ever dies, his funeral will be legendary. It is always possible that he will re-enact some scene from one of his Poe classics and emerge from his crypt. The fact is that many famous people in Hollywood owe an enormous debt to Corman. Some of the people I am talking about are Jack Nicholson, Robert DeNiro, Sylvester Stallone, Charles Bronson, Ron Howard, James Cameron, Dennis Hopper, Sandra Bullock, Martin  Scorsese, David Carradine, Johnathan Demme, Curtis Hanson, Robert Towne, Francis Ford Coppola, Gale Ann Hurd, Nicolas Roeg, John Sayles, Peter Bogdanovich, Richard Matheson, Peter Fonda, Bruce Dern, William Shatner and others too numerous to mention. It should also be noted that Ingmar Bergman, Federico Fellini, Akira Kurasowa, Francois Truffaut and other greats reached much wider audiences under the guidance of his distribution company, New World.  Not everyone has outlived him, but he has never stopped working, so each new generation has their chance to bask in the glow of the great mentor. Corman has produced nearly 400 movies and directed close to 60. His latest directorial effort is in production (Sharktopus Vs Mermantula, one of many SyFy channel epics). He was the youngest director honored by the Cinematheque Francaise and has received honors from many institutions including an honorary Academy Award in 2009.

Roger Corman’s Horror Classics Vol. 1 is a collection of three of his better known productions; The Terror, Dementia 13 (directed by Coppola), and Buckets of Blood. This collection is touted as being restored editions, which is good because many versions of these films have appeared on countless discs in shabby condition. Fans have definitely complained about faded copies full of scratches.

The Terror stars Boris Karloff, Jack Nicholson, Sandra Knight (one of Nicholson’s wives), and Dick Miller (who will show up again as the star of Buckets of Blood). It was made because Corman had finished The Raven and still had use of the sets and the services of Karloff and Nicholson. Corman was a well-known miser. His autobiography was called How I made a Hundred Movies in Hollywood and Never Lost a Dime. That was because he never wasted a dime. The film is especially notable for being one of a string of films that Nicholson made for Corman at the very beginning of his career including The Wild Angels, The Wild Ride, St. Valentine’s Day Massacre, The Crybaby Killer and The Trip. In the Documentary of Corman’s Life a very unguarded Nicholson bawls about how he owes everything to Corman. The film itself is silly by today’s standards, but since Corman is considered the king of the B pictures, it’s only fitting. It was one of many Corman films about young, beautiful women coming back from the dead. It should be said that both Nicholson and Karloff are fully game and committed and give great performances.

Bucket of Blood is a black and white and dark as in dark comedy about an unappreciated waiter who becomes an unappreciated artist by doing sculptures of his murder victims. This was probably inspired by the hugely profitable Vincent Price horror classic House, House of Wax. Like in House of Wax, our hero just covers up the bodies to make art. Dick Miller is the star (who would later show up frequently in another Corman collaborator’s films, Joe Dante). It also includes performances from other familiar faces like Ed Nelson and Burt Convey. The film’s dark comedy resembles another famous Corman film, Little Shop of Horrors with its oppressed little man killing his betters despite having no killer instinct at all. Eventually a psychopath takes hold and the little busboy goes full-tilt crazy.  It sets it self in a beatnik coffee shop full of pretentious artists, poets and folksingers while undercover cops prowl looking for undercover crime (Horse! Heroin!).

The third film is Dementia 13, directed by Francis Ford Coppola a frequent Corman collaborator early in his career (who did second unit work on The Terror among others). It was Coppola’s first film, and his most recent film Twixt has playfully returned to the genre. As usual, Corman cobbled the cast together from other actors who were under contract for another film nearby. It is one of the first of the modern-style slasher films. The story starts with a heartless wife disposing of her husband’s body so she can change the will first. It evolves into a story where an unknown madman is murdering inhabitants of the Castle Haloran. It has beautiful use of black and white throughout and features Patrick Macnee (One of Stanley Kubrick’s favorites showing up later in Clockwork Orange and Barry Lyndon) as the somewhat sinister doctor. Of the three films this is clearly the most accomplished, because Coppola took directing more seriously than Corman.

Corman’s genius was creating an empire on a shoestring. He sized up the business and only had one film that didn’t make money. That was the openly issue-oriented The Intruder with William Shatner. So Corman made sure to hide his messages in the future. He made films cheap, easy to digest, and above all, profitable. He has made so many films because he gives people what they want. After all, Roger would like to have another 50 volumes of Roger Corman’s Horror Classics.

Bubble Guppies/Team Umizoomi: Into the Snow We Go! Star Trek: The Next Generation – Season 5 (Blu-ray)