Bubble Guppies/Team Umizoomi: Into the Snow We Go!

Posted in: Disc Reviews by William O'Donnell on November 21st, 2013 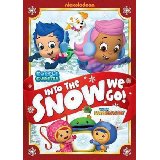 Nickelodeon has released a Holiday compilation DVD before(http://upcomingdiscs.com/2011/11/15/nickelodeon-favorites-merry-christmas/) which makes this particular release a sort of sequel to that. This time around only two shows are featured, and there is half the episodes featured than in the previous release.

The Bubble Guppies episode “Happy Holidays, Mr. Grumpfish” is the main features advertised on this release. The episode is all about making the grumpiest citizen of their underwater community feel the Christmas spirit. There are moments where the characters do lessons aimed at pre-schoolers (things like counting to 10 and such) and there is a ton of pop style songs. The latter of which I find 100x more grating on my nerves than the former. This may be an acceptable episode of the show, but it doesn’t stand out as a memorable holiday special.

Team Umizoomi gets two episodes on the DVD. Only one of the two, “A Sledding Day,” has any tangential connection to the snow/holiday theme. The show is CG flickering of bright colours and cute characters to keep toddler’s eyes and minds distracted. Not a ton of learning to be had but it could be worse.

Fullscreen. The colours are insanely vibrant in each program, obviously the help maintain the visual attention of very young viewers. The transfer to DVD has not dampened anything. A nice picture quality in each program.

Dolby Digital English Stereo. As much as I find children’s voice acting to be a custom punishment designed to occupy the ears of those settled in the 7th ring of Hell…the audio quality for this DVD is nice. A surround sound track would be wasted as the stereo delivers everything directly. This is especially true since most of the characters address the viewers directly and it would only be confusing to have sound arriving in all directions.

No special features (unless you qualify the Team Umizoomi episodes as extras). One thing worth noting is the Play All option puts the shows into a continuous loop, which will help parents/baby sitters by not forcing them to manually replay the DVD every hour or so.

Its not the heartiest release Nickelodeon has put out, which disappoints me. All of the previous releases reviewed had a lot more variety, or at least more quantity, of shows to view. I keep half-joking that these sorts of DVDs are simply fodder to keep younglings distrated…and I stand by that. Therefore my previous point is an important one.