Posted in: No Huddle by Brent Lorentson on November 29th, 2013 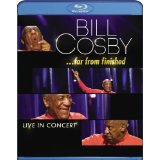 Everyone knows the name Bill Cosby, and if you’re an 80’s kid like me then you most likely know him as one of TV’s most likeable dads, Mr. Huxtable.  Cosby has been the comedian who’s managed to succeed for decades by keeping his comedy routine clean and family-friendly.  From his animated series Fat Albert and his numerous other television projects and the Jell-O pudding pop ads, we all seemed to just feel this was a guy we all let into our homes through the television where we all felt we knew him as a part of our extended family.  But following the tragic death of his son, something changed, and for a while I was starting to think we might never get back the man with the uncanny ability to make people of all ages and ethnicities laugh.

In the new 90-minute comedy special I’m happy to say that Cosby is back to form and delivers a special that not only is filled with laughs but also plenty of advice for young men out there ready to take the plunge into marriage.  Cosby takes all his years of marriage and delivers a performance that is honest, effortless and relatable for those who have already been married for some time now.  He makes it clear how in the start of all relationships, men feel like they are doing the right thing when they find their perfect woman and make her the “girlfriend”.  But Cosby is here to warn us how that all changes once we make a fool of ourselves and ask these girlfriends to spend the rest of their lives with us.

Considering it has been a while since Cosby has last done a comedy special, having the special originally air with Comedy Central is an inspired move by both the network and Cosby.  For all the young hipster viewers used to Dane Cook, Tosh and Jeff Dunham, now they get to see the real comic master at work.

Many of the stories and jokes are told through the eyes of a man who has lived a long, fulfilling life, but he makes it all relatable.  One of my favorite bits centered on him dealing with an alarm company and them trying to get the “code name” from him.  His setup for the story and playing all the parts of the operator, his wife and himself easily puts you right in the middle of the ordeal.  This ability to bring us into all his stories shows that he is still a master at his craft, and with the exception of Louis C.K. I find it difficult to name a comedian who succeeds at working at such a level.

Far From Finished I hope is more than a simple title of the show and is hopefully a promise that there is still more to come from Mr. Cosby.  Sure, I went into this special with my doubts, but 30 minutes in those doubts were squashed, and by the end of the special I feel Cosby still has so much to share with us.  Comedians come and go, but Cosby is a rarity whose work is going to get laughs now and another 30 years from now.

Brent Lorentson is a horror writer and film critic based out of Tampa, Florida. With a BA in Digital Film, he co-wrote and co-directed Scavenger Hunt. His short stories have appeared in various horror anthologies. In 2019 his short script Fertile Blood will be a part of the anthology horror film Slumber Party. He is currently working on his first novel A Dark and Secret Place set to be released in late 2019. Favorite Films: Taxi Driver, Fight Club, I Saw the Devil, The Wild Bunch, Dawn of the Dead, A Clockwork Orange, Pulp Fiction, Heathers, The Monster Squad, and High Fidelity.
Holiday Gift Guide Spotlight: Star Vista/Time Life Holiday Gift Guide Spotlight: Image Entertainment Television Classics