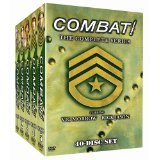 Everyone has one on their Christmas list. It’s the guy who already has everything on home video. He’s a classic television fan, and you just don’t know what to get. For years you’ve been counting on us for advice. We aren’t about to let you down this year. Image Entertainment has two awesome classic television sets out just in time for Christmas. If your list has a classic cop show fan, then it’s Naked City. If they’re a war series nut, you just gotta get them Combat. If you really, really like them, how about getting them both?

The Naked City: The Complete Series

“Ladies and gentlemen. You are about to see the Naked City. I’m Bert Leonard, the producer. As you can see we’re flying over an island, a city, a particular city…and this is the story of a number of people, a story also of the city itself. It was not photographed in the studio. Quite the contrary. The actors played out their roles in the streets and the buildings of New York itself.”

The series took hard looks at the social issues of the times. Many of the characters lived in broken-down tenement buildings and on streets littered with both garbage and gangs. Issues like prostitution, drug and alcohol abuse, corruption, inner-city disease and poverty all took up more attention than the police or even the crime of the week. Often criminals would be depicted as victims of circumstances beyond their control or basically good people who get in over their heads. This made the stories far more compelling than they would have been otherwise. You feel as though you’re seeing real people in realistic situations. The writing was true to life. Any one of these stories could have and likely did happen in the real world.

This collection is quite an impressive haul for fans of television history. You get all four seasons in individual plastic cases. These four boxes come in a sturdy box that fits rather nicely on your media shelf. Extras are pretty much limited to some commercials of the era. The video quality certainly reveals the show’s age, but they look pretty good all the same. The condition is as good as you have any right to expect.

There can be no doubt that The Naked City’s influence can be felt on shows of today. There’s no doubt in my mind that such greats as Steven Bochco and Dick Wolf were students of the series. Jack Webb might as well have committed grand larceny. No one who is a fan of police drama should overlook this one.

It is the longest running World War II drama in television history. It ran for five seasons from 1962 to 1967 for 157 episodes. The first four seasons were in black and white, while the final season ran in color. That final color season likely had more than a little bit to do with the show’s exit from the airwaves. It was still running strong in the ratings, but costs had risen quite a bit due to the increased production costs of color and the salary demands of the show’s star Vic Morrow. He knew he had the producers in a tight spot and exploited it for 10 grand an episode, which was unheard of in 1967. It is very probable that Combat would have lasted longer without these cost increases. Color also took away some of the authentic gritty nature of the series. Not only were printing costs higher, but the uniforms and props had to undergo changes to accommodate the color broadcasts. It’s much the same way that high definition required modern shows to add better detail to their props and sets.

The series followed Company K from the moment they landed at Normandy on D-Day. The unit was commanded by Lieutenant Hanley, played by Rick Jason. His second was Sergeant Saunders, played by Vic Morrow. Together they led the unit from battle to battle during the liberation of France. Some of the regulars in the unit included Little John, played by Dick Peabody. Peabody was a huge man with a distinctive deep voice. Jack Hogan played Kirby. Kirby was the screw-up of the unit. He was a good fighting man, but he was the guy who always complained or had one hare-brained scheme after another. He would often get on Saunders’ last nerve. Still, he would go to the ends of the Earth for him, as he would any of the men under his command. Pierre Jalbert played Caje (Caddy in the pilot). Caje was one of the most useful members of the unit. He was Cajun and spoke fluent French. This would come in handy quite a bit with the local French population. Steven Rogers would play Doc, the unit’s medic, for most of the first year, replaced by Conlan Carter for the remainder of the series run. The first few episodes also featured legendary stand-up comedian Shecky Greene as Braddock. He supplied the comic relief. Unfortunately, Greene was making so much green doing his Vegas show that he was losing money filming the series. He left after only eight memorable episodes. Other notable cast members who did not appear for the entire series were Tom Lowell as the naive but eager Billy, William Harlow as Davis, Michael Masters as Burns, and Paul Busch who played a German opponent in over 30 episodes.

Actual World War II footage was integrated quite well into the show. This allowed for large artillery barrages and the kind of battle footage that just would not have been possible on a 1960’s television budget. It was remarkable that the footage was used. What is truly amazing is how well some of it appears seamlessly in the action. Of course, that wasn’t always the case. It depended on how good the footage itself was at the source and also how often the same footage was used. Unfortunately, the unit came under fire by the same assortment of tanks and artillery time and time again throughout the show’s run.

The set is an impressive one, to be sure. You get all 152 episodes in five cases that represent each of the five seasons. There are 40 discs total. Each season carries a few extras that include photo galleries and short half-hour behind-the-scenes features. One of the best and simplest extras I’ve encountered is a collection of text features called Oddities & Bloopers. You get some very interesting tidbits on most episodes from Jo Davidsmeyer, who wrote a companion book for the series. She even participates in the many audio commentaries. You also get folks like Richard Donner, Ted Post and surviving cast members and guest stars. The folks at RLJ had the fans in mind when they put this thing together.

With recent films like Saving Private Ryan, Hollywood has found new and improved ways to bring us the experience of combat situations. Combat doesn’t have these modern technological advantages, but I can’t help but think that the show has done just as good a job of bringing me closer to the human experience. I’ve never been to war, so I will never really know for sure. It’s been 40 years since Combat left the first-run airwaves, but it’s time to assemble the unit again. “All right, saddle up. We’re going out again.”

Gino Sassani is a member of the Southeastern Film Critic's Association (SEFCA). He is a film and television critic based in Tampa, Florida. He's also the Senior Editor here at Upcomingdiscs. Gino started reviewing films in the early 1990's as a segment of his local television show Focus. He's an award-winning recording artist for Omega Records. Gino is currently working on his 8th album Merchants & Mercenaries. Gino took over Upcomingdiscs Dec 1, 2008. He works out of a home theater he calls The Reel World. Favorite films: The Godfather, The Godfather Part II, The Body Snatcher (Val Lewton film with Karloff and Lugosi, not the pod people film), Unforgiven, Gladiator, The Lion King, Jaws, Son Of Frankenstein, The Good, The Bad And The Ugly, and Monsters, Inc.
Bill Cosby… Far From Finished Galactic Adventures Double Feature: 3D Sun / Mars 3D (Blu-ray)