The Hobbit: The Desolation Of Smaug

Posted in: The Reel World by Gino Sassani on December 13th, 2013 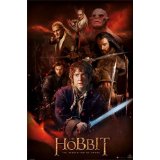 “There are dark spirits, old and full of hate…The world is in great danger.”

A trilogy is a hard animal to pull off. Even when you have a popular franchise, it is extremely difficult. All of the pieces have to work just right or you could have a disaster on your hands. It is even harder when you’ve already beaten the odds once and delivered a trilogy that is both loved and a huge box office success. You run into an almost insurmountable mountain of expectations. Your pieces must somehow fit together so that they can be viewed as one whole product. They also need to match the world and production style of the previous trilogy even though technology has changed quite a bit in the decade that separates the two. Lightning doesn’t often strike the same place twice unless you happen to live in Florida or, apparently, New Zealand, where Peter Jackson has managed to do the impossible…so far.

It was bad enough that we had to wait a decade for Jackson and company to finally work out all of the lawsuits and issues that kept anyone from making The Hobbit. We learned that the book would be divided into two films, and Peter Jackson would once again be behind the camera. New Zealand would again double for mythical Middle Earth, and all was right in the universe. By Christmas of 2013 we would have the complete story. Well… it’s Christmas 2013, and I did just view the second Hobbit film, but as we all learned soon before the release of the first, the book has been broken into three films, but they weren’t going to make us wait quite so long for the third and final chapter. It’ll all be over next summer. Except that now it won’t be, and we’re going to have to wait until next Christmas for that final installment. I’m not sure if I can decide if Peter Santa Claus Jackson has been naughty or nice playing all of these waiting games with us. After my viewing of The Hobbit: The Desolation Of Smaug, I’m inclined to lean toward nice. Some things… perhaps….are worth waiting for, after all.

The middle film in a trilogy has the hardest job yet. You’ve already been introduced to the story and its characters, but the film must continue that momentum with the added disadvantage of not being able to deliver a satisfying conclusion. And like Han Solo being frozen in carbonite, you will leave The Desolation Of Smaug inspired, entertained, thrilled and unsatisfied. That’s where that whole waiting a year thing comes in.

When I say the film will leave you unsatisfied, I’m talking about the conclusion, or rather the lack of one. But up until that moment there is plenty to feel good about here.

The story picks up shortly after the first film ended. The opening scene is actually a shot of Peter Jackson himself walking across the screen munching on a carrot. The fellowship of dwarves along with their burglar Bilbo (Freeman) and wizard Gandalf The Grey (McKellen) are now close to the Lonely Mountain. It’s there that the Dwarves had been run out of their kingdom by the dragon Smaug. The journey takes them through Mirkwood Forest, where they encounter the giant spiders who have become emboldened by a growing dark force. The fellowship is the captured by the elfish King Thranduil (Pace) We’ve seen his son before. It’s Legolas (Bloom) and new face Tauriel played by Lost’s Evangeline Lily.

Meanwhile Gandalf has gone to check on Radagast’s (McCoy) story of the necromancer at Dol Guldur. There he encounters the true evil that will play out more significantly in the Lord Of The Rings trilogy, to be sure.

The movie finishes with a rather lengthy climax that pits Bilbo finally against the dragon Smaug with the distinctive voice of Benedict Cumberbatch. This is the scene you were waiting for much as you were Bilbo’s encounter with Gollum in last year’s film. The scene has many of those same elements. Like Gollum, Smaug is toying with Bilbo. There’s even an element of riddle to be solved. The set and production design here is one of the trilogy’s most impressive. Smaug is certainly one of the more imposing and memorable unreal characters in the franchise. While I won’t give up Gollum’s number one spot just yet, I was surprised at how long this encounter could keep me enthralled. There is very little cutaway. There are a couple of intercut moments of the Dwarves getting restless before they finally come to the rescue, and there is a group of segments taken from the perspective of the city that Smaug will target when this is all over. Jackson does a pretty sweet job of building the tension there. Fans of Sherlock have to get a kick out of Holmes and Watson together again in such an epic encounter. Even though Benedict is just delivering the voice, it adds tremendous power and authority to the dragon. Without him it is merely an imaginary creature on a computer screen, as grand as he is. It’s obvious the two have comfortable chemistry, and it was a brilliant choice by Jackson, one that pays off huge dividends for us in the audience.

This film is not as light as the first. The closest to levity comes in the by now famous scene that has the fellowship escaping the elves in barrels on a rolling stream. It’s a tense scene to be sure, but there’s an element of frolicking to be had. I expect to see this ride open at a local Florida amusement park any time now. I’m in.

That’s the primary difference between these films. The Desolation Of Smaug appears to drive a bit more steady. The team find themselves rather quickly from one situation to the next. There isn’t so much of the quiet evening pondering that was a huge part of the first film’s atmosphere. The pace is far more quick until we get to the Smaug confrontation.

Once again Jackson has managed to find even more New Zealand locations that we hadn’t seen yet in almost 12 hours of film to date. The views continue to be breathtaking. Of course there’s plenty of computer magic to tweak these vistas, but much of it is real, and that brings the important element of reality to a film that is at times overburdened by the massive computer-generated effects. There are times that Jackson gives us too much visual, and it can be quite overwhelming. Most of the bad guys we face are computer characters, from the incredibly creepy spiders to the grandeur of Smaug.

Fortunately, Jackson never lets this massive production get in the way of the fact that this is a story of characters, one hero in particular. Martin Freeman and his co-stars deliver the humanity that could have so easily been lost in all of this spectacle. Jackson delivers so many wonderful character moments that we can, for just a moment, forget the big picture and live in Bilbo’s emotions. He’s emerging as a hero, and we see him struggle with the pull of the ring. We have the benefit of knowing just how consuming that pull will eventually be, but it’s so rewarding to see those blossoming early moments as the ring begins to demand its price. As Bilbo finally faces his moment of truth, he is not the same hobbit he was when he left the shire. We see Gandalf’s prediction that he will never be the same come into its own. Again, the interplay between Bilbo and Smaug alone is worth the price of admission to this film.

Evangeline Lily is a welcome new face. She delivers a better performance here than she ever did on Lost. There is strength in this character that I never found in Kate. Fans were obviously delighted at our screening to see Orlando Bloom return. One of my favorite scenes shows his prejudice toward dwarves and cleverly sets up the friendship and rivalry he would share with Gimli in the Lords trilogy. It’s quite nice to see Jackson take just a moment to pay those kinds of things off for the fans. It shows a level of care and a meticulous attention to detail.

The 3D is always very natural. There are few moments of “gotcha”, and you can expect this film to live very comfortably with the first one. If I have a complaint, it might be that I did not feel that Howard Shore delivered as much of his outstanding score this time around. There are the familiar themes. Yes, they are there, but there are moments when it falls off for me. What is there sounds great, but I will have to say this is Shore’s weakest entry in the Tolkien universe.

Forget about the grand design for two and a half hours. There will be plenty of time to appreciate and take it all in. There will be plenty of critics who will demean the film as just another indulgent romp for the fan boys. They’ve obviously never read Tolkien. Jackson continues to deliver an emotional story that contains more magic than all of the WETA animators can provide. “It never ceases to amaze me, the courage of hobbits.”

Gino Sassani is a member of the Southeastern Film Critic's Association (SEFCA). He is a film and television critic based in Tampa, Florida. He's also the Senior Editor here at Upcomingdiscs. Gino started reviewing films in the early 1990's as a segment of his local television show Focus. He's an award-winning recording artist for Omega Records. Gino is currently working on his 8th album Merchants & Mercenaries. Gino took over Upcomingdiscs Dec 1, 2008. He works out of a home theater he calls The Reel World. Favorite films: The Godfather, The Godfather Part II, The Body Snatcher (Val Lewton film with Karloff and Lugosi, not the pod people film), Unforgiven, Gladiator, The Lion King, Jaws, Son Of Frankenstein, The Good, The Bad And The Ugly, and Monsters, Inc.
Gift Guide Spotlight: A&E The Hunt (Blu-ray)