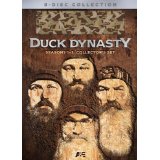 While we usually have a ton of stuff each year from A&E to share in our holiday spotlight, we just haven’t seen near as much from the studio in 2013. The distribution has changed, and we just don’t see the kind of titles we used to. It’s sad both for us and you. Take heart. We have been given two potential gift guide titles to share with you this season.

“Meet the Robertsons clan. They turned duck calls into a multi-million-dollar empire.  But running a family business is tough when the family just wants to run wild.”

But by the time I got a couple episodes in, I couldn’t believe it; I was actually looking forward to what shenanigans the Robertsons were going to get into next.

The most fun I had with the show was following Willie’s brother Jase and Uncle Si.  These guys are a reality TV gold and are what will keep me watching as the seasons follow.  What’s so great about them you may ask; well, for starters, Jase brings the right amount of conflict with Willie, whether it’s Jase trying to play manager for the day or stealing Willie’s prized RV to pick up some ATV’s, Jase seems to always keep his brother on his toes.  As for uncle Si, to call him the crazy uncle is an understatement, whether it’s the random “hey” catchphrase, his recollections of Vietnam while talking to kids on career day, or how excited he gets with frog hunting; he manages to always say or do the unexpected.

But the show isn’t trying to change the world, and it is entertaining.  In Frog In One, when Jase convinces Willie to skip out of going to school to speak at career day and has his dad Phil (he founded Duck Commander) and Uncle Si go in his place, scripted or not, this turned out priceless.  Just seeing the kids’ reactions to seeing a bird being gutted, or hearing the violent recollections of Vietnam, isn’t all we get.  Things get more outrageous when Jase decides to get together a crew for a frog hunt at the golf course which goes horribly wrong.  It’s something you’d expect from a goofy screwball comedy, not a reality show.

As I try to wind this up, the one thing that stuck with me for the show that even as an animal lover and hating to see any animals get killed…seeing how riled up they guys get when they encounter beavers.  I’m sure PETA disproves of the show, but it is hilarious seeing the lengths the family will go to to wage war against these furry creatures.  Guns, smoke, and homemade bombs are just some of the tricks they have up their sleeves when engaged in battle against their furry adversaries.

Overall I can’t say this is groundbreaking television, but for what it is I had a good time with it, and it was never boring, which is always a good thing.  Sure, a lot of this is staged, but considering most of the time the guys are moving through the woods with guns and explosives, perhaps a little staging in the name of safety is a good thing.  But for those who are tired of the reality shows that seem to thrive off characters simply fighting or bed hopping, Duck Dynasty is a breath of fresh air.

The set comes with the entire first three seasons and a bandana with the Duck Dynasty logo.

In the 1980’s, I feasted on a bevy of animation growing up. I watched typical cartoon shows like Transformers, G.I. Joe, and Voltron. Honestly, my habits were to watch every piece of animation that came across in those days at least once. Yes, even the Care Bears. But sadly despite all of that, I completely missed some great ones. One of those truly great ones was the Robotech series. Now, with an 85-episode behemoth of a complete series set, I get a chance to rectify that grave injustice.

Robotech originally ran March of 1985 in the United States. It had started out as a Japanese series and then Harmony Gold USA came in, reworked the dialog and content so that they could sell it to stations in the US as first-run syndication. However, Harmony tried hard to include most of the complexity and drama of the source material. Producer Carl Macek supervised the proceedings and the sweeping epic was born. The show did very well and had attracted a more mature audience that was not expected.

Robotech is a force in animation even today. The whole reason so much anime exists here in America can at least be partly attributed to the success of the Robotech television series. If it wasn’t for creative genius Carl Maeck, there is a distinct possibility we as Americans might be forced into more G.I. Joe and Transformers spinoffs and remakes than we can stand. Robotech was more than just cartoons however; it was a show with characters and a story that can still be appreciated today.

This is an impressive set with 85 episodes and the Robotech films included in a fancy plastic box. The discs are a little hard to get to. Their stacked several to a spindle. It’s something I could easily forgive for such a massive set. It’s a perfect gift for the animation junkie on your list.

Thanks to Brent and Michael for contributing to this article.

Gino Sassani is a member of the Southeastern Film Critic's Association (SEFCA). He is a film and television critic based in Tampa, Florida. He's also the Senior Editor here at Upcomingdiscs. Gino started reviewing films in the early 1990's as a segment of his local television show Focus. He's an award-winning recording artist for Omega Records. Gino is currently working on his 8th album Merchants & Mercenaries. Gino took over Upcomingdiscs Dec 1, 2008. He works out of a home theater he calls The Reel World. Favorite films: The Godfather, The Godfather Part II, The Body Snatcher (Val Lewton film with Karloff and Lugosi, not the pod people film), Unforgiven, Gladiator, The Lion King, Jaws, Son Of Frankenstein, The Good, The Bad And The Ugly, and Monsters, Inc.
Jayne Mansfield’s Car (Blu-ray) The Hobbit: The Desolation Of Smaug