Posted in: Podcasts by Gino Sassani on December 17th, 2013 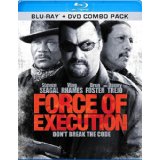 I had a remarkable time talking to Bren Foster the other day. His latest film is Anchor Bay’s Force Of Execution. The film also stars Steven Seagal and Ving Rhames. Bren’s a championship Martial Arts fighter. Many of his fans know him from his long run on the soap opera Days Of Our Lives. We had a lively talk about his career and even scorpions and other venomous creatures. We’ll be reviewing the film soon. Until then you can bang it here to listen to my chat with Bren Foster

Gino Sassani is a member of the Southeastern Film Critic's Association (SEFCA). He is a film and television critic based in Tampa, Florida. He's also the Senior Editor here at Upcomingdiscs. Gino started reviewing films in the early 1990's as a segment of his local television show Focus. He's an award-winning recording artist for Omega Records. Gino is currently working on his 8th album Merchants & Mercenaries. Gino took over Upcomingdiscs Dec 1, 2008. He works out of a home theater he calls The Reel World. Favorite films: The Godfather, The Godfather Part II, The Body Snatcher (Val Lewton film with Karloff and Lugosi, not the pod people film), Unforgiven, Gladiator, The Lion King, Jaws, Son Of Frankenstein, The Good, The Bad And The Ugly, and Monsters, Inc.
The Hunt (Blu-ray) Dancing: A Man’s Game