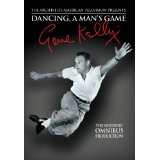 “Just as the dancer, the athlete does not exist who doesn’t move with a certain rhythm.”

My name is John. I am a man, and I love to dance. Dancing requires grace, power, athleticism, coordination and a handful of other attributes that we revere in the world’s biggest sports stars. Those same exact qualities thrill us when they’re on display on a football field or a basketball court. So why can’t one dude tell another dude that he enjoys dancing without drawing a sideways glance? Gene Kelly, one of the most famous and successful dancers of all time, explored that very question during this vintage TV special, now out on DVD.

Though not quite as sexy as the introduction implies, Man’s Game really is a well-attended and impressive mish-mash of worlds (and well-toned body parts) colliding. To illustrate Kelly’s point about the masculine grace of dance, the Hollywood legend enlisted the help of sports stars like Mickey Mantle, Sugar Ray Robinson, Johnny Unitas, Bob Cousy, along with a handful of Olympians like figure skater Dick Button. Most of the appearances amount to cameos. The exceptions are Button and Robinson, each of whom dance a little routine alongside Kelly and acquit themselves quite well. There are also appearances by ballet great Ed Villella and Patrick Adiarte, who was starring in the Broadway version of “Flower Drum Song” directed by Kelly. (That explains the oh-so-subtle plugs for the show.)

Kelly was 46 when he did this TV special (his first) and his best films were behind him. Still, the most thrilling parts of  Man’s Game involve Kelly taking a seemingly mundane sporting motion — a tennis backhand, a basketball player pivoting on one foot, a slide into home plate — and casually turning it into a mind-blowing dance. He achieves this by taking the exact same movements and making them more graceful and exaggerated. Not surprisingly, Kelly proves to be a totally credible and charming host; he’s even willing to laugh at himself when he mispronounces the word “competitor.”

According to Kelly, the difference between a dancer and a sports star is that dancers have something to say with their movements. The special takes time to delve into the surprisingly masculine origins of dance movement (swordsmen/fencers were better served if they were balanced and light on their feet) as well as the dominant role men occupy in the world of dance. Kelly believes people confuse the duty of movement in dance with effeminacy.

Man’s Game covers a lot of ground in 55 minutes, so the segments and dance demos tend to be a bit on the brief side. (The exception is the Gershwin-inspired showstopper that closes the program.) The second half of the special focuses heavily on the history and uniqueness of American jazz and tap dancing. As someone who thoroughly enjoys dance and history, I found that stuff fascinating. However, I couldn’t shake the feeling that this part of the show was the medicine Kelly really wanted to give his mass TV audience, and the famous sports starts were the spoonful of sugar meant to make it go down easier.

Then again, if you’re not any sort of dance enthusiast, it’s not very likely you’ll be watching this show in the first place. Kelly was the perfect guy to make the masculine case for dance. Unlike his legendary contemporary Fred Astaire — who had a more gravity-defying and regal bearing when he moved — Kelly danced with a more grounded force of movement, yet didn’t sacrifice any grace. To be honest, the DVD is not in very good shape at all — the print shows every bit of its age and is riddled with blemishes — but it’s absolutely worth a watch in these modern times when people are only slightly more tolerant of manly dancers.