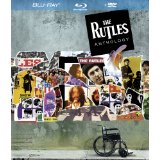 On the Seventh Day Of Christmas Video Service Corp gives to you:

The art of the Mockumentary is one of the most difficult to pull off. Most of us consider Spinal Tap to be the definitive example of a good documentary spoof. In the 1970’s Monty Python’s Eric Idle gave us another wonderful example. The Rutles is a riff on The Beatles and the group was nailed perfectly in 1978’s All You Need Is Cash. Since then there have been records and other spin-offs from the spoof. Now it’s all collected in the witty The Rutles Anthology Blu-ray. This thing is just super-loaded with fun. Video Services Corp wants you to see for yourself. They’ve given us a copy of the Blu-ray to giveaway this Holiday season.

Gino Sassani is a member of the Southeastern Film Critic's Association (SEFCA). He is a film and television critic based in Tampa, Florida. He's also the Senior Editor here at Upcomingdiscs. Gino started reviewing films in the early 1990's as a segment of his local television show Focus. He's an award-winning recording artist for Omega Records. Gino is currently working on his 8th album Merchants & Mercenaries. Gino took over Upcomingdiscs Dec 1, 2008. He works out of a home theater he calls The Reel World. Favorite films: The Godfather, The Godfather Part II, The Body Snatcher (Val Lewton film with Karloff and Lugosi, not the pod people film), Unforgiven, Gladiator, The Lion King, Jaws, Son Of Frankenstein, The Good, The Bad And The Ugly, and Monsters, Inc.
American Bomber 12 Days Of Christmas Giveaways – Day 8: China Beach Seasons 1 & 2 From Timeless Media/Star Vista