Posted in: No Huddle by Archive Authors on December 31st, 2013 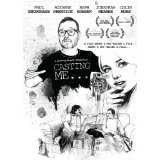 One of the easiest ways to shoot a small independent film is to film in your own real life environment. That means you don’t have to think about a lot of the details that go into making most films. You already have and know thoroughly the sets and locals of your shoot. It’s even easier if you don’t have to build sets, since you just use the real locations of your life. It’s even easier if you just remove all pretense and you just make the movie about a guy who is making a movie about a guy who happens to be himself. It makes it even easier when the guy is a casting director, because then you have a ready supply of talent at your disposal. It certainly would be nice if this was about a Hollywood casting agency, but it takes place in South Africa. I had a hard time figuring out where it took place, since most of the movie takes place in nondescript lofts and apartments. The accent could be British, but I’m no Henry Higgins, so I’ll take their word that it takes place in South Africa. South Africa is pretty much the other side of the world, and most of what I know about South Africa has to do with apartheid and its aftermath. There is no sign of that in this film since everyone is white.

Casting Me… is basically a Woody Allen-type film with a young insecure guy who is trying to make a film about a guy like himself in his spare time. He’s still in love with his ex, and she might be interested in playing herself in the movie if he finishes the script. The girl is very cute and attractive in a zaftig way.
None of the actors have shown up on any radar of mine, but the production looks professional and everyone does a good job. The writer/director Quinton Lavery has included tons of commentaries and extras, including a day in the life of the director and the cinematographer. I only wish most classic films had this much commentary.

The film is fairly raunchy in a tasteful kind of way, but it does include a shot of uncensored gay porn. It also uses the f-word at least 100 times. It has some general nudity and sex scenes. It is all good-natured fun. There are numerous sex-obsessed gay and straight characters. It is filmed in black and white, so that does add some class to the production. It does include a lot of film references, and one could say that the black and white cinematography is a nod to Woody Allen’s Manhattan. The film is pleasant and fun, but if it hopes to emulate Woody Allen it could use a lot more actual jokes.

If there is one major complaint I have about the DVD it would be the cover art, which is a boring and unenticing black and white drawing. It’s a compliment to the film that I enjoyed it despite having to work myself up to watching it after such a boring cover. That is actually a huge problem. If a cover is so unappealing that you have to struggle to put the movie in your player, you have a huge problem since you probably won’t buy it if you see it on the store shelf or internet page. That is the marketplace for many movies now. There is enormous competition for those small films that have no real advertising budget. If the film is a raunchy sex comedy, you might as well advertise it as such. Truth in advertising is best.

Casting Me… is an odd movie because it tries so hard to emulate classic American films that it really loses any identity of its own. It does not feature South African scenery much except for one night scene which could have just as easily been Mulholland drive overlooking Hollywood. The people could be from anywhere, since the accents are not very identifiable.

Another complaint I have is that I was hoping to learn more about the casting agency business, but it isn’t likely anything I learn in this film would be applicable to Hollywood, New York or London.

It is surprising that a film with so many faults could ultimately be appealing. I would say all the actors are well cast, so I suppose the casting agency, in this case, knows its business.