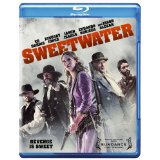 “Violence is never the answer.”

That statement is said unironically by a character in Sweetwater, but we know better; in the movies, violence is pretty much always the answer. This is especially true when it comes to the revenge genre which, the films of Quentin Tarantino notwithstanding, is largely a man’s game. (Risk-averse Hollywood studios are much less likely to greenlight WoMan on Fire.) This bloody, straightforward Western from twin filmmakers Logan and Noah Miller is not terribly original, but it does try to put its own spin on the hallowed tradition of cinematic payback.

Sweetwater is set in the unforgiving plains of New Mexico in the late 1800s. The film focuses on three particularly colorful characters: Sarah Ramirez (January Jones) is a striking former prostitute trying to start a new life with her kind husband Miguel (Eduardo Noriega). The couple lives next to Prophet Josiah (Jason Isaacs), the sadistic and self-appointed religious leader who has dubbed his parcel of property “Holy Land.” Josiah doesn’t take to kindly to those he deems trespassers, including the two poor saps played by the Miller brothers early on in the film.

The third major player is Cornelius Jackson (Ed Harris), a wild card of a lawman who arrives in town as the new sheriff. Although Josiah has multiple wives, Sarah manages to catch his eye which leads to a chain of events that puts her on a bloody collision course with the demented preacher (and maybe the renegade sheriff).

This is the second movie the Miller brothers have made, and the behind-the-scenes story of how the first one came together is honestly more interesting than anything that happens in Sweetwater. (They’ve obviously earned the loyalty and affection of Ed Harris, who starred in their previous effort, Touching Home, and gives an amusingly loose performance here.) The film’s first act — along with the film’s introduction to the main characters — is unnecessarily jumbled. Those main characters also only get to show us just one dimension — whether it’s evil (Josiah), stoic (Sarah) or cuckoo (Sheriff Jackson) — so the rest of the cast really has no chance. (That includes the talented Stephen Root as a disgustingly evil banker, and country singer Jason Aldean as one of Josiah’s henchmen…on second thought, it’s probably better that Aldean didn’t speak too much.)

Thankfully, those three main characters are played quite well. Harris is clearly having a blast with his unhinged sheriff, who literally waltzes in and out of scenes. He also brings a welcome sense of unpredictability. Meanwhile, the combination of Isaacs’ dark features and icy blue eyes means he gets to play his umpteenth villain. The religious lunatic is a cliché by now — the fervor in Isaacs’ performance actually reminded me of Daniel Day Lewis in There Will Be Blood — but the actor makes Josiah a truly nasty piece of work. (Even The Patriot’s Col. Tavington wouldn’t want to run into Josiah in a dark alley.)

Then there’s Jones, an actress who has been much maligned for her stiff, joyless work playing stiff, joyless characters. (Most notably as Betty Draper in Mad Men.) This movie presented a chance for Jones to show a feistier side of her screen persona, but she can’t escape some of her patented flat line readings early on. Luckily, once Sarah goes into full-fledged revenge mode, Jones’ withering glares actually make her pretty convincing as a laconic badass. I just wish she’d shown more personality early on to make her transformation into a killing machine more distinctive and dramatic.

Despite some impressive scenery, Sweetwater doesn’t really spring to life until the shooting starts. The filmmakers incorporate some macabre moments tinged with dark humor — and also sheep — into its bloody final act. I wish they’d devoted half as much imagination and innovation into the stuff that leads up to the killing, instead of relying so much on their killer lady twist.

Sweetwater is presented in an aspect ratio of 2.35:1. The 1080p image is arrived at with an AVC MPEG-4 codec at an average of 25 mbps. Instead of going for a clearer, sharper presentation, the Blu-ray presents a grittier, sandier HD image that suits the film quite well. The New Mexico setting is somewhat drained of color, but the panoramic shots of the plains are no less stunning. (This despite some seemingly unintended digital noise on display.) What little color there is in the film (besides blood) comes courtesy of Sarah’s purple revenge dress, which stands out wonderfully in the otherwise muted Western. Close-ups reveal a consistently high amount of detail and texture, while the more inconsistent medium shots occasionally appear comparably soft. Black levels are strong, particularly when Isaacs is on screen and we see a nice separation between his oil-black hair and wardrobe.

The DTS-HD Master Audio 5.1 track is not as overpowering as you might expect from a violent revenge Western. In fact, ambient noises seem to dance around the edge of the rears rather than power through, leading to an unobtrusive sense of immersion in scenes set in the plains. In other words, the noise is there, but it rarely pipes up to get your attention. Once the action kicks in, the track proves to be quite dynamic. Gunshots ring out from the front speakers and echo throughout the rest of the sound field. Dialogue is generally intelligible, despite being tested by Harris’ eccentric performance. (I honestly had no idea what he was saying in the scene that opens the movie, but I understood him going forward.)

The Making of Sweetwater: (10:32) The cast and crew talk about filming their alternately “horrific and hilarious” Western with a feminist bent. The actors are very complementary of their jovial directors, and they seemed to have fun working in Santa Fe. In other words, this is your basic, harmless Making Of.

“Cold Grey Light of Dawn” by Hudson Moore Music Video: (3:19) This song, which plays over the end credits, is actually quite lovely. I just wish this special feature didn’t pair the tune with a sepia-toned glamour shot of the singer, which makes the whole thing unintentionally cheesy. Also, “video” means we should be looking at moving images, not a still photograph.

If you like Westerns and/or revenge movies, there’s a good chance Sweetwater will be to your taste. Just don’t expect anything new or particularly exciting. (Also, don’t expect January Jones to finally smile on-screen…at least not for more than a few seconds.)