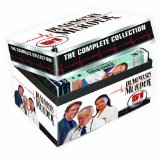 If you’re like many folks out there, Christmas is over and you’ve got some gift certificates or holiday cash to spend. If you’re a reader here at Upcomingdiscs, you’re looking for something to add to your home theater with that booty. May I suggest that you look at the impressive box set for Diagnosis Murder. This is one heck of a collection. You get 51 DVD’s in all. All eight seasons are included, along with the earlier television movies and reunion films. You get every episode, and you also get the Jake And The Fat Man episode where Dr. Mark Sloan first appeared.

Dr. Mark Sloan first appeared in The It Never Entered My Mind episode of Jake And The Fat Man. In that episode Sloan was accused of a murder, and it was up to Jake and Jason to prove his innocence. The character had a certain charm that appeared to carry with audiences, and two years later Sloan had his own show, Diagnosis Murder. Dick Van Dyke did for doctors what his good friend Andy Griffith did for lawyers as Matlock. Both traded on their earlier careers in trademark comedies to reimagine dramatic roles in their twilight years.

Gino Sassani is a member of the Southeastern Film Critic's Association (SEFCA). He is a film and television critic based in Tampa, Florida. He's also the Senior Editor here at Upcomingdiscs. Gino started reviewing films in the early 1990's as a segment of his local television show Focus. He's an award-winning recording artist for Omega Records. Gino is currently working on his 8th album Merchants & Mercenaries. Gino took over Upcomingdiscs Dec 1, 2008. He works out of a home theater he calls The Reel World. Favorite films: The Godfather, The Godfather Part II, The Body Snatcher (Val Lewton film with Karloff and Lugosi, not the pod people film), Unforgiven, Gladiator, The Lion King, Jaws, Son Of Frankenstein, The Good, The Bad And The Ugly, and Monsters, Inc.
Cassadaga 12 Days Of Christmas Giveaways – Day 10: Family Christmas Film Collection